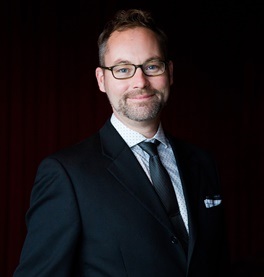 This Guest Article for REVITALIZATION was written by Nate Hommel and Alissa Weiss. 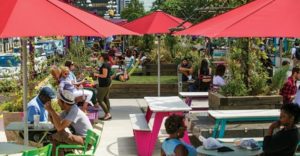 While the district was founded over 20 years ago to provide public maintenance and safety services, our organization’s approach to community and economic development has expanded significantly over time to provide transportation services, host signature events, support neighborhood jobseekers and businesses, and to design, build, and maintain public spaces.

UCD conducts its public space work in the context of historically significant architecture and major public realm investments by the University of Pennsylvania and Drexel University, as well as a growing number of developers. 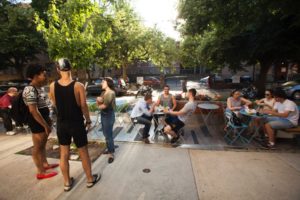 We work to reuse underutilized industrial spaces, revitalize or repurpose parking lots, and – most importantly – to reclaim our streets.

The focus of our public space portfolio is working in the spaces in between and beyond the institutions in order to bring the public realm to a human scale. UCD often works with underused parcels that sat for decades and transforms them into welcoming public spaces.

Many public spaces start with a formal plan, intensive build-outs and large upfront costs; in contrast, we start with modest, removable interventions, relying on an iterative cycle of ‘Hack > Tinker > Analyze > Design’ to create vibrant spaces that strengthen our community. 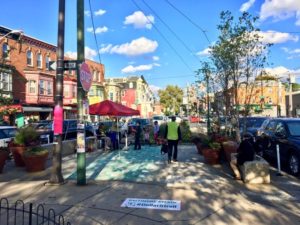 Our team uses tactical urbanism and placemaking techniques to build trust with users, neighbors, public officials, funders, and stakeholders. This allows UCD to be more experimental in long-underutilized places and has led to some of our most successful interventions.

Our internal motto is “perfect is the enemy of done.” Not waiting for perfection enables immediate progress and encourages adjustments to our spaces based on data.

If we waited around for the perfect idea, the perfect site, or the perfect grant, we might not get started. Communities across the world want to see spaces restored or revitalized, but all too often, the people in control of those sites wait too long for the perfect thing to come along. 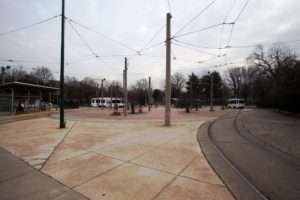 At UCD, we prefer the iterative placemaking approach, knowing that a project might fail— but if it fails, we don’t have a multi-million dollar quagmire on our hands. Instead, we can make adjustments to better fit user needs or repurpose materials from one site into another.

Data is key to our ‘Hack > Tinker > Analyze > Design’ approach, since we use the rich data we collect to justify the need for improvements to spaces, to inform the changes we make, or to advocate for further improvements to City officials. We rely on data to make the spaces better over time.

Our first foray into this work began in 2011, when we brought the first Parklets—innovative seating platforms—to Philadelphia. These are seating platforms that take the place of 1-3 parked cars. These simple platforms can revitalize an area and bring new life to the streetscape. 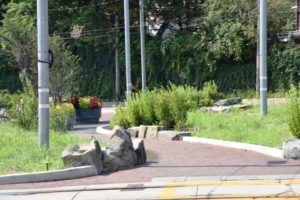 We started with two small Parklets and have since expanded to six throughout the community, adjusting the design based on user feedback. We made them strong, durable, and flexible.

This built trust with neighbors, shop owners, and City officials such that within three years Parklets went from a UCD experiment to a program that the City runs in communities throughout Philadelphia. 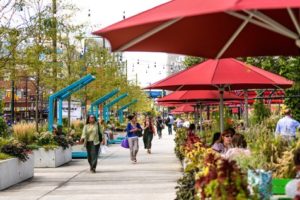 UCD wanted a vibrant way to welcome visitors to Philadelphia, so the first intervention was to introduce simple, moveable tables, chairs, umbrellas and raised planters to get in as many plants as possible onto a bridge structure.

This wasn’t perfect, but it had the potential to bring new life to a bleak expanse of concrete. We added dynamic programming which drew people to the space and we studied user behavior in great detail: hourly visitor counts; their age and gender; and their activities, such as food consumption (from home vs. an onsite food truck), how long users sat, where they congregated, and more.

This data armed us with a deeper understanding of what visitors wanted from the space, leading us to Porch 2.0 in 2014. The second iteration included more seating options, more plants, more food, and more fun. We added 14 custom swings, enhancing the whimsical nature of The Porch, and have been amazed to see an average of 300 visitors a day enjoy this wonderful amenity.

Since UCD didn’t have the funding to build everything in the first phase, iterative placemaking was fundamental to long term success; incremental changes fostered trust, which allowed us to access more funding along the way to make the bigger changes. 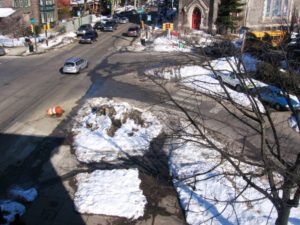 Snow on the street, foot paths but no car tracks show where plazas can go | Photo by University City District

Each project allowed UCD to build credibility and become more experimental in its approach. In 2012, UCD began working on Pedestrian Plazas, simple spaces intended to reduce crossing distances for pedestrians and provide a pleasant resting place.

These are parts of the street that aren’t needed by vehicles. We know this from observing snow patterns called “sneckdowns:” areas where snow falls, yet after days or weeks, no tire tracks show up, meaning that the excess space would be better served for pedestrian – as opposed to vehicular – uses.

By adding planters, plants, large stones, and a little paint to these spaces, we were able to repurpose empty pieces of asphalt into vibrant sidewalk extensions. Like Parklets, Pedestrian Plazas started as a UCD experiment and have since become a citywide program. 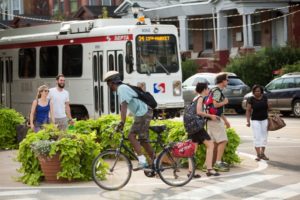 All of these experiments have led us to The Trolley Portal Gardens, a $4.5mm project at the busiest at-grade rail station in Philadelphia.

For decades, the space around this busy trolley hub was strictly utilitarian and underutilized by pedestrians. Little about the space made people proud to use public transit, and we sought to add dignity to their daily experience. We wanted to set an example of how a station could become a community amenity for those who used public transit as well as those nearby residents and employees who merely passed by the space.

Based on the trust UCD had built over the years with community, public officials, funders and more, we were able to work closely with the Southeastern Pennsylvania Transit Agency (SEPTA), the City of Philadelphia, and neighborhood groups to revitalize an industrial space into Trolley Portal Gardens, a park with a multi-story restaurant/café. 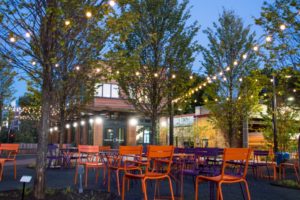 It took us nearly six years from project inception to completion, but we are pleased to say that Trolley Car Station restaurant and our beautiful public space are fully open.

Everything UCD had learned from years of tactical urbanism and placemaking experiments contributed to this design: moveable tables and chairs, flexible spaces where impromptu gatherings or play could occur, and lots of plants.

Best of all, Green City Works, UCD’s full service landscaping social venture maintains the space, ensuring that the neighborhood’s beautification is tied to growth and opportunity for local residents.

We know this isn’t going to be a perfect space, and will make adjustments as needed. As with all our projects, we won’t be afraid to admit mistakes and then make the changes that allow us to reclaim underutilized spaces for the broader community. Because, once again, perfect is the enemy of done. 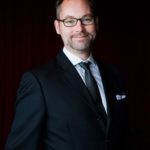 Nate Hommel (nate@universitycity.org) is Director of Planning and Design at the University City District (UCD) in Philadelphia, Pennsylvania. Nate joined UCD in 2012, and has served as the Director of Planning and Design since 2015. Nate uses his urban design expertise and dedicated enthusiasm to further enhance urban quality of life issues throughout University City. He served as the project lead on Trolley Portal Gardens, UCD’s largest project to date that turned a utilitarian trolley facility (busiest at-grade rail station in Philadelphia) into a vibrant public space along with a 2 story new construction restaurant.

Nate greatly expanded the district’s parklet and public space program, and has been influential in developing UCD’s progressive placemaking, and tactical urbanism methodology to enhance urban quality of life in West Philadelphia. Nate was instrumental in launching Green City Works, UCD’s landscaping social venture, and serves as lead designer for all landscaping and public space projects that the venture executes. Nate is passionate in the belief that Streets are Public Spaces, in line with that thinking, he is one of the founding members of Open Streets PHL and was the External Communications Director for the organization. The Group successfully lobbied for and developed an Open Streets event in Philadelphia, in less than 1 year. 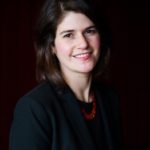 Alissa Weiss (alissa@universitycity.org) is Director of Strategic Initiatives and Communications at UCD. She joined them in October od 2015 as Director of Strategic Initiatives and Communications and is thrilled to return to her hometown after a 6 year hiatus. Prior to starting at UCD, she worked in Philadelphia nonprofits and New York City government, and she has had the opportunity to work on a range of urban policy issues, from health care to food access to workforce development.

Alissa has a BA in history from the University of Pennsylvania and a Masters of Science from Harvard School of Public Health. Outside of work, Alissa can be found wandering about Philadelphia by bike and foot, cooking for friends and family, and getting lost in urban parks.