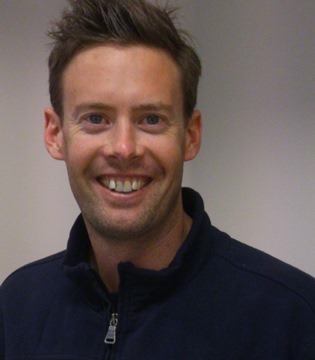 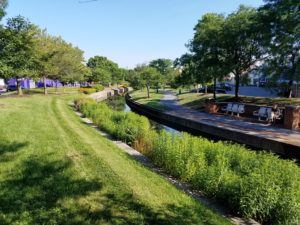 However, stormwater runoff is a major cause of water pollution in urban areas with runoff containing heavy metals, bacteria, litter and other pollutants from the urban landscape. In addition, during heavy storm events, which are likely to increase in frequency and magnitude with climate change, many cities’ combined sewer systems overflow resulting in a mix sanitary waste and stormwater entering urban waterways.

Overall, this reliance on grey infrastructure causes erosion and flooding in urban waterways, as well as damages habitats, property, and infrastructure. As such, cities around the world are turning to green infrastructure to restore the health of waterways and mitigate the risks of increased storm events from climate change. 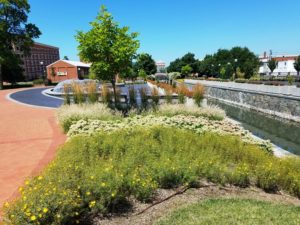 Green infrastructure, which uses vegetation, soils, and natural process to create healthier environments and manage excess water, ranges in size from permeable pavements, rain gardens, green roofs, and green spaces in neighborhoods, all the way up to constructed wetlands and restored river ways at the city level.

When green infrastructure is interconnected, it can enhance the resilience of infrastructure and communities to extreme weather events by reducing localized flooding risks as well as improving water quality.

These benefits are complemented by additional environmental, economic, and social benefits including improved air quality, reduced urban temperatures, energy savings, higher property values, increased recreational opportunities, and aesthetic improvements. Furthermore, green infrastructure, unlike grey infrastructure, can appreciate in value over time with the regeneration of nature and its associated ecosystem services. Some examples of cities turning to green infrastructure to restore the health of waterways and mitigate the risks of increased storm events include San Francisco, Amsterdam and Berlin.

Greening the grey in San Francisco

San Francisco is integrating green infrastructure into streetscape projects to reduce stormwater runoff as well as provide additional benefits including higher water quality, greening of neighborhoods and traffic calming. The green infrastructure installed in streets mimics the natural hydrologic processes of the landscape by increasing:

To further reduce stormwater runoff, San Francisco requires all new and redevelopment projects that disturb 5,000 square feet or more of ground surface to manage stormwater that falls on their site with green infrastructure. As part of this requirement the city has developed the Stormwater Management Requirements and Design Guidelines that provides guidance on how to incorporate green infrastructure into site design. Activities approved by the Design Guidelines to create or replace impervious surfaces include rainwater harvesting, installing vegetated roofs, laying permeable pavement and developing bioretention swales, ponds and constructed wetlands.

Amsterdam’s Rainproof concept encourages different stakeholders across the city to implement green infrastructure so the city can become rainproof while ensuring the health of waterways. Some initiatives include pilot green strips and a constructed wetland. Examples of which include:

Kop Zuidas’ pilot green strips In the new residential area on the Kop Zuidas, the city and its utility Waternet have installed a pilot water retardant green strip along the street. The green strip is lower than the surrounding area and collects rainwater from the streets and roofs of nearby houses. The temporary water storage solution can hold water for up to 24 hours in the strip sand, after which it will infiltrate into the soil. If there is excessive rainfall, the water will overflow to rainwater drains or nearby surface water.

The polluted rainwater is discharged into a separate settling tank, then into a ditch, from which it will be purified by the constructed wetland. After purification the clean water will be discharged into the Erasmusgracht.

In Berlin, one of the largest sources of water pollution is from the mixed wastewater system in the city’s inner districts. The system overflows after heavy rainfall up to 30 times a year. Each time, a large amount of unpurified wastewater enters directly into the River Spree, impacting water quality and the ecosystem of the river. Project Flussbad aims to permanently transform a 1.6-km stretch of the Spree River in Berlin’s historic center that has gone unused for more than 100 years.

The project will create a 750-meter stretch of the Spree Canal along Museum Island into a publicly-accessible swimming pool: for at least half a million residents of the city this will be their closest natural bathing waters. The natural swimming pool’s water will be of bathing water quality with the filtered water coming from an upper stretch of the Spree Canal that will be re-naturalized into a biotope landscape and reed basin to purify the river water by natural means. Specifically, the upper stretch will contain a 390 meter-long 7,200 m² constructed wetland to purify the running water in a natural way while the 640-meter uppermost section of the river will be re-naturalized to become a wildlife habitat. 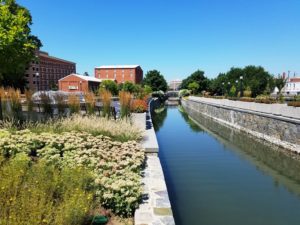 These include revitalizing urban waterfronts, mitigating the risks of increased storm events from climate change, and capitalizing on the “fringe” benefits green infrastructure provides, such as increased recreational opportunities.

All photos are by Storm Cunningham, and show recently-developed green infrastructure in historic downtown Frederick, Maryland. 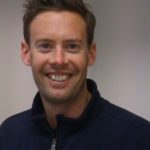 Robert C. Brears is based in New Zealand and the UK, and is the author of Urban Water Security (Wiley)

Brears is the founder of Mitidaption, a consulting firm focused on consults on climate change risks to business, governance and society.

His blog site is Mark and Focus.