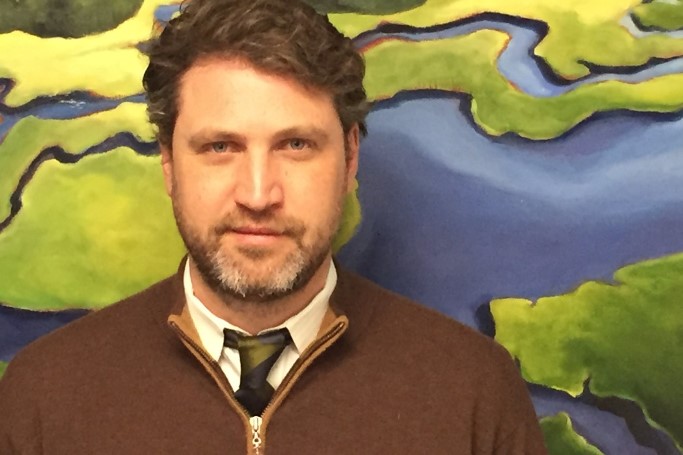 The term “dam removal” brings to mind the decommissioning of large hydropower facilities in the west and the waging of contentious legal battles to improve wild salmon passage on big, iconic rivers, images of roiling white water, dynamite charges and environmental luminaries like Edward Abbey and Yvon Chouinard come to mind.

While these river restoration projects capture the national headlines, in the Northeast U.S., where a myriad of dams dot the landscape like white church spires, dams are being removed for more subtle environmental and social reasons, one of which is the economic revitalization of depressed mill towns. 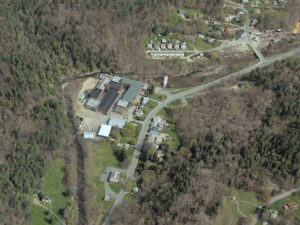 Briggs Brothers Mill complex. Dam is above complex, adjacent to the worker’s housing.

In New England, water-powered wheels, shafts, and gears mostly ceased turning in the 1920s and 1930s, replaced by the wide distribution of reliable and cheap electrical power. Dams that were built so solidly in the late 1800s and early 1900s are now entering the twilight of their design life, the equivalent of a rusty Saab 900 in need of a new transmission.

While a small percentage of the better built, designed and sited dams can be repurposed for small scale hydropower, a vast majority of low-head dams exacerbate flooding, present attractive nuisances, do not meet modern safety requirements and are under the threat of failure. These realities make the repurposing and redevelopment of mill sites complicated, as most dams are physically and legally connected to their brick and stone mill building counterparts.

Planners in small New England cities and towns such as Lee, East Bridgewater, Taunton, and Pittsfield are eager to rethink their business districts, and iconic mill buildings are the centerpieces of potential economic development. Senior housing, artist’s lofts, micro-breweries and hydroponic gardens are all considered beneficial uses in these beautiful, light-filled buildings.

However, developers are loathe to assume excessive risk in redeveloping mill buildings. The profit margins for renovating historic buildings are slim. In addition, government incentives for preservation are scarce.

A developer who learns that an industrial site comes with a dilapidated old dam usually will think twice about investing the hundreds of thousands of dollars needed to attract new tenants or retain old ones. Historic mill buildings require universal access improvements, broadband internet and energy efficient windows. What they do not need is an ever-present liability such as a dam. 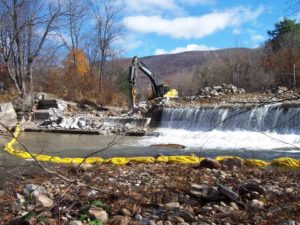 In Massachusetts, 40 dams have been removed for ecological and social purposes. Most of them were industrial mill dams at one point in their long and illustrious lives. Here is look at a specific river restoration project where the dam was removed and a business was saved, allowing the mill building to be easily redeveloped in the future.

Clarksburg, Massachusetts is small; its population of 1702 is less than the date in which it was incorporated (1798.) The North Hoosic River starts in the Green Mountains of Vermont and races across the state line through tiny Clarksburg, where it once hesitated at the Briggsville Dam.

Today, Clarksburg has one major business: Cascade School Supplies. Over 80 years ago, Cascade bought the old Briggs Brothers Mill, a sprawling brick complex, which, at the turn of the century, manufactured woolen warp, the long yarns used in weaving cloth.

When Cascade bought the Mill they became owners of a run-of-river dam, a structure 145 feet long and 16 feet high. Over the decades, the dam fell into disrepair, and at the turn of this century, Cascade faced a nearly $750,000 bill to repair it. The cost was significant, so much so that the president of the company opined that the dam repairs could put his company out of business.

The dam happened to be on a high-quality cold water stream, home to a rare fish and perfect habitat for a myriad of aquatic species which would benefit from free flowing water. A group of ecosystem restoration partners banded together and removed the dam for an estimated $250,000 less than what it would have cost to repair it. Grants were secured, and Cascade was able to stay in business and continue to be the town’s largest employer. With the dam gone, the community has a much more valuable property that can, in the future, be repurposed and redeveloped. 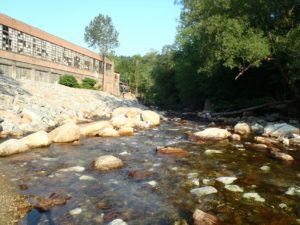 Adding to this value is the fact that flooding has been reduced post-dam removal. When Tropical Storm Irene ripped through the region, the Briggs Brothers Mill buildings experienced no significant losses.

As natural resource managers, we typically remove dams to improve river health and eliminate a major ecological stressor on the landscape, not to pump life into a local economy.

But when these river restoration projects also help a struggling town become more vibrant and economically viable, then there is an added reason to keep tearing down barriers to environmental, social, and economic progress.

Tim Purinton is Director of the Massachusetts Division of Ecological Restoration in the Department of Fish and Game.

Tim was a former Governor Robert F. Bradford Fellow for Excellence in Public Administration at Harvard’s Kennedy School of Government.