This Guest Article for REVITALIZATION was written by Emily Hazelwood and Amber Sparks.

There comes a time when the useful life of an offshore oil and gas platform comes to an end, at least when it comes to drilling for oil, and that’s when we dive in. We are marine scientists and co-founders of Blue Latitudes, a women-owned small business and marine environmental consulting firm.

As environmental consultants, we work to unite science, policy, and communications to solve the ecological challenges associated with repurposing offshore oil and gas platforms as artificial reefs through the Rigs to Reefs (RtR) program.

Repurposing an object, which was once environmentally taxing, into something sustainable and environmentally friendly is inherently fresh, and we believe, timely. Our research is fundamentally based in creative thinking and we are committed to radically changing the way society approaches ocean conservation and the sustainability of our ocean resources. 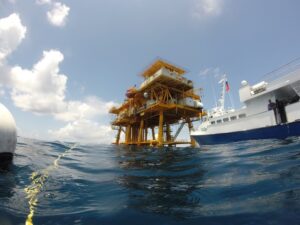 In our daily lives, we all contribute to the global demand for offshore oil and gas, by driving our cars, turning on the lights in our homes and continuing to rely on plastics. This demand has led to the development of thousands of offshore oil and gas platforms in almost every ocean on the planet.

Many of these platforms are now aging relics, leftover designs from an era in hot pursuit of developing and extracting the world’s offshore oil reserves, with little thought given to their eventual removal.

However, as the global economy has begun to shift away from traditional energy resources (i.e. offshore oil and gas) towards renewables (i.e. offshore wind, wave and solar energy), the removal of many of these structures has become inevitable, and the technical, economic and environmental implications associated with their decommissioning must now be addressed.

Completely removing an offshore platform is costly and environmentally destructive, especially considering the marine ecosystems colonizing these structures. For beneath each oil platform thrives a unique and abundant marine community, with the average structure providing a home for thousands of fish and between 2-3 acres of habitat. 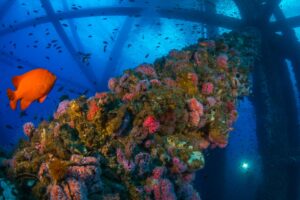 RtR provides an alternative to complete platform removal, enabling oil companies to modify their platform structures so that they might continue to support marine life as an artificial reef. Through this decommissioning process, the oil well is sealed and capped, all drilling infrastructure removed, and the upper 85 feet of the platform structure is either towed to another location, toppled in place, or removed.

The oil company then donates the remaining underwater infrastructure, or “jacket”, to relevant local and/or state natural resources managers to be maintained as an artificial reef. Regardless of if an oil platform is reefed or completely removed through the decommissioning process, the oil wells themselves are capped and sealed in the exact same way, so reefing the structure does not create a greater threat of an oil spill.

The RtR conversion has many positive implications for local ecosystems, industry, and other stakeholders, including the retention of habitat, streamlined decommissioning costs, and enhanced reef resources for local fisheries.

However, not every oil platform is a good candidate to be converted into an artificial reef. Each structure needs to be assessed on a case-by-case basis to determine if structurally and ecologically it would make for a good candidate and to ensure that if reefed, it would not have any negative impacts. 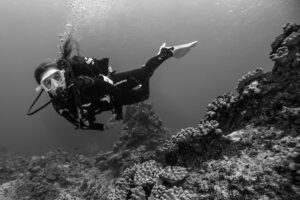 That’s not to say that there isn’t an economic benefit retained by petroleum companies, because there is and its quite significant. Costs can run as high as $200 million to completely remove a large deep-water platform in the Gulf of Mexico, with daily derrick barge costs running as high as $700,000 a day to transport the structure to its final disposal site (Harrington 2014).

For example, in the Asia-Pacific region, an average 6,000-ton oil platform will cost approximately $35 million to completely remove. Decommissioning via the RtR approach would result in decommissioning costs being cut in half, with average cost savings amounting to nearly $22 million per platform decommissioned (Twomey 2010).

In the United States, the established RtR programs mandate that these cost savings be shared with the state to fund the RtR program, marine education and conservation. These funds incentivize the state to accept liability for the structure and ensures that both the oil company shareholders and the state benefit financially.

In many areas around the world, oil companies have long been perceived as the enemy, while bustling ecosystems exist quietly below the surface. Converting these rigs to reefs provides a silver lining to the realities of offshore oil and gas development.

In areas like the Gulf of Mexico, where between 500 and 600 offshore oil and gas platforms have been successfully reefed, the RtR program has proven to be a replicable and scalable solution which can catalyze sustainable ocean resource development. With more than 500 structures converted during the last 30 years in the United States, RtR is a proven circular economy approach which helps maintain the value of ecosystem services and redefine industrial growth while providing a platform for new industries such as offshore wind, marine aquaculture, and ecotourism.

Worldwide, RtR programs remain uncommon, the reasons for this vary state to state, and country to country, but likely include a lack of policy to facilitate RtR program implementation and/or public disapproval of the program. 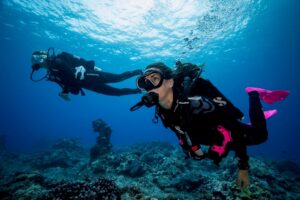 From our perspective, this negative public perception is one of the largest hurdles. For what the public supports, policy will follow. And so flows the duality of our work to simultaneously assess the ecological value of offshore oil and gas platforms on a case-by-case basis, while also conducting research and public outreach to change the tide of public perspective around RtR programs.

We are deeply passionate about ocean conservation and science communications and our intrinsic understanding of the human demand for ocean resources led to our co-founding of the Blue Latitudes Foundation, a 501(c)3 organization dedicated to seeking out opportunities for conservation at the intersection of industry and the environment.

Ultimately, at the heart of the RtR debate is a paradigm that we’re going to see, more and more, as our country’s infrastructure ages.

Worldwide our cities and infrastructure are growing older. The momentum from the industrial revolution that spurred radical growth and development, is slowing. Neighborhoods that once flourished are abandoned, highways fall into disrepair, bridges are crumbling. The question is whether we attempt to return these pieces of civilization back into the untouched nature that once existed, or simply help the adaptive ecosystems that have sprung up in their midst to flourish.

Oil platforms are just the latest piece of aging infrastructure to force this question. What the world decides to do with the hundreds of platforms standing off the global coastlines could affect how we think of environmental rehabilitation for decades to come.

Learn more about our work.

Emily Hazelwood has a M.A.S in Marine Biodiversity and Conservation from Scripps Institution of Oceanography. She is a marine conservation biologist, environmental consultant, and entrepreneur. She is a co-founder of Blue Latitudes LLC, a certified women-owned small business and marine environmental consulting firm that works with government and industry to unite science, policy, and communications to solve the ecological challenges associated with re-purposing offshore oil and gas platforms as reefs via the Rigs to Reefs Program.

Emily is also a co-founder of the Blue Latitudes Foundation, a 501(c)(3) non-profit organization dedicated to seeking out opportunities for conservation at the intersection of industry and the environment. As a leader and explorer, she is committed to elevating the scientific understanding of our oceans in communities worldwide and has led scientific research expeditions around the world from Malaysia to the Kingdom of Tonga. In 2018 Emily was recognized on Forbes 30 Under 30 list in the energy sector for her work developing sustainable, creative, and cost-effective solutions for the environmental issues that surround the offshore energy industry. Emily has been diving for over 15 years, she is a SCUBAPRO Deep Elite Ambassador and PADI Certified dive master.

Amber Sparks has a M.A.S in Marine Biodiversity and Conservation from Scripps Institution of Oceanography. She is is an oceanographer, environmental scientist, and entrepreneur. She is a co-founder of Blue Latitudes LLC and the Blue Latitudes Foundation. Her expertise is unique, using technology to facilitate to intersection of science and communication. A former Ocean Curator at Google in partnership with the Sylvia Earle Alliance, she engineered and launched intelligent map layers in Google Maps that distill and relate complex concepts in ocean science for a variety of audiences.

Ms. Jackson also has an established foundation as a scientist. A former National Science Foundation Researcher at the California Academy of Sciences, she developed a curiosity for using artificial habitats to mitigate anthropogenic losses and degradation of natural habitats. In California, the Rigs to Reefs program is an active example of this. In 2018 Amber was recognized on Forbes 30 Under 30 list in the energy sector for her work developing sustainable, creative, and cost-effective solutions for the environmental issues that surround the offshore energy industry. Amber has been diving for 10 years, she is a SCUBAPRO Deep Elite Ambassador and PADI Certified advanced diver. Photos of Amber and Emily are ©Scott Sporleder.