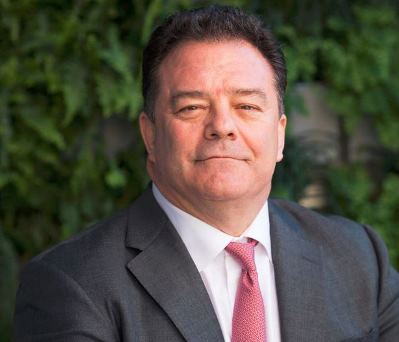 The Sacramento, California region is rapidly changing before our eyes. This is largely thanks to $3.2 billion in urban investment, which is dramatically transforming the downtown.

This fast-paced revitalization effort is something new, which I hadn’t before seen in my 20-year economic development career. It’s been humbling to watch as the community continues to economically grow and prosper, but it has not always been a forward-thinking city.

The Sacramento region for far too long has been known as a “government town.” A sleepy town that continued to be known as the city you drive through on your way to vacation in Lake Tahoe. Many vacant buildings along the highway were empty, as developers were hesitant to reinvest into the downtown, but that soon changed. 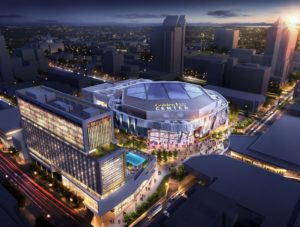 In 2015, Sacramento’s future changed forever when the Kings NBA franchise team decided to not relocate to another city despite many attempts. The Golden 1 Center was born, catalyzing the gentrification and revitalization of downtown Sacramento.

Sacramento is now home to a $558 million state-of-the-art arena; the first indoor arena venue to earn LEED Platinum in the world. The Golden 1 Center is also one of the most technologically advanced arenas ever built.

The Greater Sacramento Economic Council was also formed changing the economic development strategy of the region. The organization is the catalyst for innovative growth strategies in the Capital Region of California. Greater Sacramento is responsible for leading community-driven efforts to retain, attract, grow, and scale new businesses; develop advanced industries; and guide new job-creation strategies throughout a six-county region. 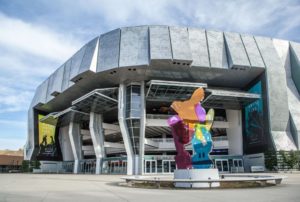 With the birth of the arena came a vast expansion of restaurants throughout downtown. In the shadow of Golden 1, an authentic Southern inspired BBQ joint, “Sauced” was eagerly welcomed. Soon to come, are eateries such as “Pressed Juicery”, “Echo & Rig”, and “Burger Lounge.” All of them are key players in the city’s revitalization efforts for the area next to the arena.

Another modern urban renaissance, complementing Golden 1 and the Downtown Commons, is the Residences at the Sawyer situated within the city’s new epicenter. 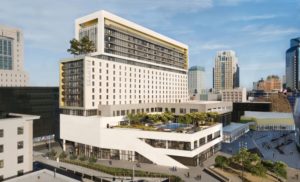 Consisting of 45 contemporary residences offering amenity-rich, full-service living within steps of the city’s flourishing features. This is only one of many residential projects on the rise in the region. 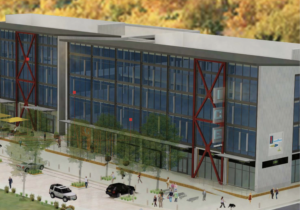 The Ice Blocks “experience” integrates all the cultural and aesthetic strengths that make midtown and R Street desirable.

The property is located on R Street: Sacramento’s new urban development corridor. Tenants located at the property will have an amazing selection of Sacramento’s best dining and drinking to choose from. Essentially, the Ice Blocks act as a blank canvas for Sacramento’s livelihood, ready to be restored and reinvigorated.

The Ice Blocks embraces Sacramento’s past while celebrating its future. The name “Ice Blocks” comes from an old ice factory that was located where the new development now sits. The former Crystal Ice manufacturing plant encompassed over 110,000 square feet of property awaiting rebirth.

The rising and transformational city is home to many start-ups and fruitful companies. A number of which, chose the region over others due to Sacramento’s advantages. Affordability, available talent, and a creative economy, grasp attention of many, especially Sheri Atwood, founder and CEO of SupportPay. Most business owners instinctively think about Silicon Valley.  But behind that globally-famous moniker, many startups find it hard to outshine the concentrated competition, which stunting their growth. 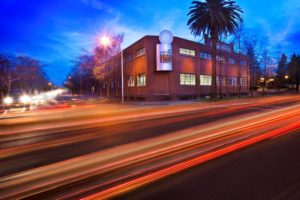 An increasing number of relocators and start-ups are now anchoring themselves in the region. Office space became an increasing demand. A building that was built as a fruit and vegetable cannery was rehabilitated into office use in the 1980’s. From an old vegetable plant to a tech center, Fulcrum Property obtained The Cannery in 2006.

Our board member, Mark Friedman, President and founder of Fulcrum, aims to deliver architecturally unique projects that influence the way people work, play, and live. The team recreated The Cannery’s identity while honoring its historic character. Today, the infrastructure is home to 12 companies. Offering innovative spaces to make work an enjoyable environment. 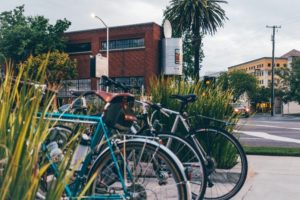 Our client, Sheri Atwood of SupportPay moved into The Cannery after relocating from Silicon Valley.

Another up and coming corridor is Oak Park. The Triangle District has been making strides in developing hip retail, restaurants and housing options all bringing an economic boost to the area.

Many say it is just the beginning. From breweries to coffee shops, and plant nurseries to juice bars, there is a little something for everyone. On the second Thursday of each month, from May to October, Unseen Heroes produces a night of community and culinary delight.

A chance for the city to come together and celebrate the redeveloped corridor. Oak park was not always this way, it was once a ghostly town with a hesitant reputation. Although, over the past few years and growth of unique retailers, businesses and events, the neighborhood took a turn for the better. 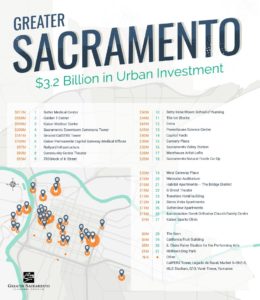 The investment into downtown is certainly paying off. Sacramento’s population is growing at a rapid rate of 25.5% and is currently the fastest growing city among the ten largest California cities, according to the Department of Finance. The region’s population growth has outpaced both the state of California and the nation as a whole.

The transformation of the urban core has also attracted youth and millennials. This may surprise many of you, but the Greater Sacramento region is younger than the regions of Seattle, Portland, San Jose, and San Francisco.

UC Davis ranks 10th among public universities nationwide and is a top 25 research university.  The institution is ranked #1 in the world for Veterinary Medicine and #1 in the nation for Agriculture. It is a destination for high quality education and experience. UC Davis made huge advancements in diversity for Fall 2017 admissions.

This year, California residents account for 18,480, or 59.7 percent, of admitted freshmen, of those, 30.6 percent are from historically underrepresented groups. Aside from its academic accomplishments, the university is a huge contributor to the region by supporting 65,000 jobs in the Davis-Sacramento Region and generating $6.8 billion of economic output.

The second largest university in the region is California State University, Sacramento. Located in the capital city which fosters hands-on opportunities with the nation’s most influential public and private institutions. The university has an annual economic impact on the region of nearly $816 million and 9,000 jobs.

Sacramento State has influenced the revitalization of the city in more ways than one. Most California State campus’ have tightened their admissions criteria to reduce the number of students. Sacramento State, on the other hand, is increasing enrollment for at least the next 5 years. With the goal to make the campus more of a community, new $55 million dorms are scheduled to open this Fall.

The university also recently announced its beginning stages of building a $91 million state-of-the-art science complex. Positioning Sacramento State as a regional resource for science and technology, promoting peer-to-peer interaction, teaching labs, and a community observatory and planetarium. The region is ecstatic to watch our institutions evolve and prosper in the community to graduate highly educated and experienced young professionals into the world. 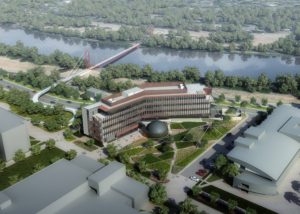 Sacramento is growing, economically and socially, while providing a prosperous environment for people to come and succeed. It is a time and place for innovation, and new beginnings. Companies and startups are choosing our region for an environment to grow and prosper in. Our culture, diversity, and pool of opportunity are all becoming more attractive.  Bringing small technology companies into the region is essential: entrepreneurship fuels the innovations that shape our future.

Aside from opportunity, the cost of living in the Bay Area is flooding people out, and into Sacramento. Sacramento remains relatively affordable. The median price a square foot of a Sacramento-area home is $228, compared with $531 in the Bay Area.

As people continue to be priced out of the Bay Area, it leaves Sacramento as the only “California Option” for people looking to buy a home in a larger urban city. The US Census Bureau says, nearly 20,000 people each year relocate from the Bay Area to the Greater Sacramento Region.

Not only are home buyers at an advantage, but for a business the Greater Sacramento Region is a more affordable option than markets such as Seattle, Denver, Austin, and Portland. The Sacramento Region ranks 8th among the largest 50 Metro Areas in the US in terms of the percentage of those with a Bachelor degree or higher with a degree in a STEM field (US Census Bureau American Community Survey, 2014-2015 1-year estimate).

The revitalization efforts of the Sacramento region have been astounding to watch. We have seen the community come together in ways never before. We are enthusiastic to be here today, as the capital city continues to unravel and thrive among the state of California. 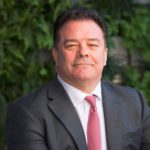 Barry Broome serves as the first President and CEO of the Greater Sacramento Economic Council. The organization is the catalyst for innovative growth strategies in the Capital Region of California. Barry is responsible for leading community-driven efforts to retain, attract, grow, and scale new businesses; develop advanced industries; and guide new job-creation strategies throughout a six-county region. In his role, he has established the first-ever public/private partnership economic development organization led by CEOs in the State of California; the organization comprises 37 CEO’s and 19 communities in the Greater Sacramento region.

Previously, Barry was the President and CEO of the Greater Phoenix Economic Council (GPEC) where he delivered more than 50,000 jobs and 250 company locates into the Phoenix Region. Under his leadership, for six out of the ten years, GPEC was named one of the top economic organizations in North America by Site Selection Magazine. In 2013 he was also named Arizona Economic Developer of the Year, Arizona Real Estate Executive of the Year, and received the Phoenix Black Chamber of Commerce award.

Prior to Arizona, Barry was the CEO of Southwest Michigan First (SMF), where he built an organization from scratch that was later listed in the Top 20 companies in North America by Site Selection Magazine. In 2006, SMF was named one of the fast 50 companies in Inc. Magazine, the first nonprofit to have that honor. Barry built and co-developed venture funds, angel networks, and 31 new ventures – primarily in the life science space in the Kalamazoo region. Barry was named Michigan Economic Developer of the Year in 2001.

Preceding Michigan, Barry led the economic development in Toledo, Ohio, where he completed the largest industrial deal in the history of the United States called Project Jeep; which was built on 450 acres of brownfields in the North Central Toledo area. Barry was also the keynote speaker at Arizona State University’s 2009 graduation and has been a guest lecturer at the University of Chicago, Notre Dame, Arizona State University, University of Arizona, Kalamazoo College, and Western Michigan University.