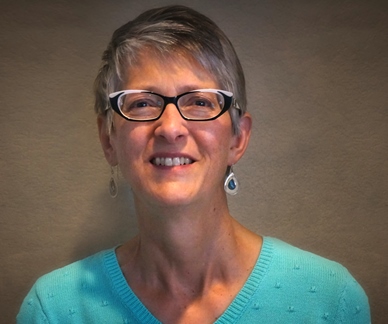 A Guest Article for REVITALIZATION by Judith Broeker.

Armenia is one of the world’s oldest civilizations, and according to some calculations, is where Noah’s ark landed after the flood.

Throughout its approximately 3000 year history, Armenia has been invaded by many groups seeking to control this geographic crossroads: Romans, Persians, Mongols, Arabs, Ottoman Turks and Russians have all controlled the area at some point. Consequently, Armenians have continually striven to retain their own culture, including their architectural heritage. 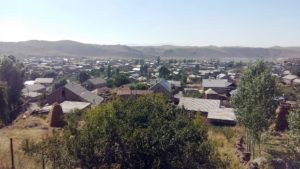 In the late 1800s, Gyumri was a prosperous community called Alexandropol. During this period many beautifully detailed houses were constructed of local stone and decorated by regional artisans. Alexandropol’s city center is the current day Kumayri historic district.

In 1918, Alexandrapol took on the extreme challenge of assisting waves of Armenian refugees fleeing Turkish troops. Led by Near East Relief, three deserted army bases were converted into housing for orphans. 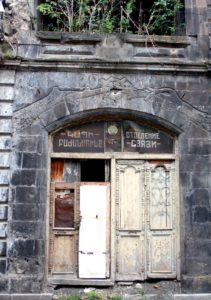 The complex contained 170 buildings and became know as the “Orphan City,” ultimately harboring 22,000 orphans at its peak. This is key to understanding Gyumri’s residents and the impact they had on Armenians now scattered around the world.

Turkish troops invaded Alexandropol in November 1919, cutting supply lines that provided food and fuel. Orphan City and the town of Alexandropol survived by going on half-rations. Armenia ultimately accepted Soviet rule in late 1920 in exchange for protection against Turkey.

Gyumri regained its prosperity under Soviet rule, and the Kumayri-Gyumri-Alexandrapol historic center was established as a museum-preserve in 1980.

The registry included 1,200 historically significant structures, from housing to educational and industrial facilities to public buildings. 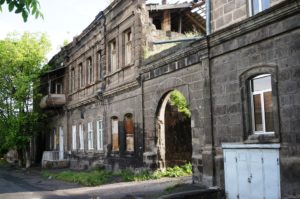 Disaster struck in 1988 when Gyumri was devastated by the Spitak earthquake. More than half the city was destroyed, 25,000 people died, 140,000 were injured and 16,000 were rescued from the rubble

In the immediate aftermath of the quake, the Soviet Union promised to rapidly rebuild Gyumri. But times had changed and the Soviet Union was in decline, dissolving in December 1991. Supply lines between the republics collapsed and there was rapid decline of the city’s economy.

One of the most devastating economic losses involved Gyumri’s textile factory, which had been the second largest in the Soviet Union. The factory employed 10,000 workers, mainly women. With the end of the Soviet Union the supply of cotton from Uzbekistan stopped and the factory closed. 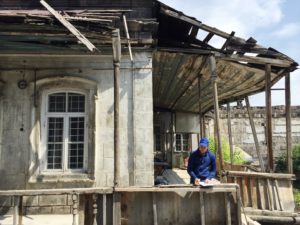 Just days after the earthquake, thousands of railroad containers were brought to Gyumri to house the population. Containers were un-insulated, without water or heat, and thousands died during the harsh winter of 1988.

Until 1994, reconstruction of the city center was largely unable to proceed because containers housing 10,000 families occupied the area’s avenues, parks & plazas. By 2004, 6,500 of these families had found permanent housing and most remaining container homes were moved to neighborhoods on the edge of town. 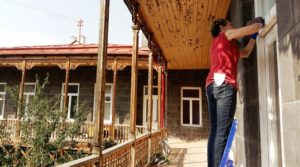 In 2015, journalist Stephen Powell talked with the mayor of Gyumri, who said that 2,500 families still lived in the domiks (metal container homes) designed to last a maximum of four years.

Adventures in Preservation’s onsite partner, Armen Hovsepyan, has a remarkable story of his own that illustrates life for many today.

At the time of the earthquake Armen was four months old, living with his mother in a third floor apartment. His apartment building collapsed, and it took seven hours for rescuers to dig him from the rubble in below freezing temperatures. 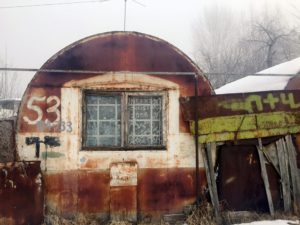 He and his mother were given a container for housing, and now at the age of 30, he has had no other home. In an interview with Stephen Powell, Armen explained: “When it rains outside, it rains inside,” he said. “It is crazy cold in the winter.”

Powell went with Armen to his home and describes the situation. “Technically, it is two metal containers placed side by side. There is a sitting out area by the front door, a living room, one bedroom and the kitchen. In the ceiling above the kitchen table a tear is clearly visible in the fabric. Armen shares this home with his mother and an elderly female friend of the family.

All around their house, the urban landscape is an endless succession of metal containers still housing people,” he wrote in “Quake-hit city in Armenia tugs at the heart“, posted on November 27, 2015 in the South Caucasus Notebook. 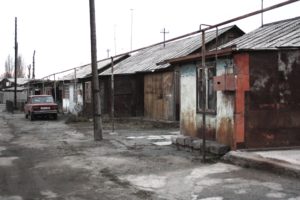 Street of domiks.Photo by Armen Hovsepyan.

Gyumri is currently being downgraded from city to community, with accompanying loss of status and funding.

Armen has a university degree from the US, is fluent in English and Russian, and holds a responsible job in city’s Department of Foreign Affairs and Tourism…with a monthly salary of $104 (US). Even without a sufficient income to move out of the domik and into an apartment, Armen loves his hometown and his country, and works tirelessly to develop solutions for the many problems.

AN EFFORT TO REVITALIZE GYUMRI 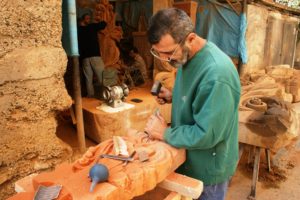 Gyumri’s struggle is now measured in decades and diversion of vital funds by corrupt officials has led to a drastic reduction in assistance from outside Armenia. With a new prime minister recently elected as the result of massive peaceful marches throughout Armenia, citizens are motivated to join forces and move the country forward.

AiP will continue efforts begun in 2011 to work with local residents and involve them in revitalization efforts that can then be supported by AiP volunteers and others. 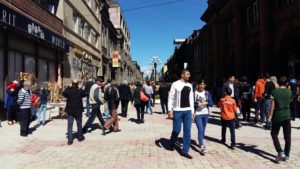 The project goals are to identify owners of damaged historic houses with an interest in repairing their home and preserving historic features. AiP assists with raising funds and brings volunteers to complete much of the conservation work.

Once completed, the owner can then continue to live in a portion of the home and provide apartments or small business space in other restored rooms. The goal is to ignite the entrepreneurial potential in Gyumri residents and create restorative development in an economy generated by heritage tourism. 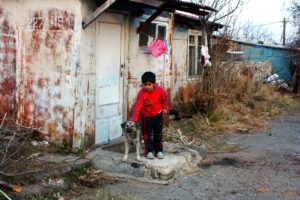 Armen states: “The situation in Gyumri is very urgent. Very soon the city can be turned into an abandoned monumental area. Every week from the central square, two travel buses leave the city with entire families. Building houses for residents and giving it to them won’t be a solution because people will sell it as soon as possible and leave the city. However, they will be happy to find some type of work and earn money.”

At this point, parts of Gyumri have been rebuilt, but houses in the Kumayri historic district range from collapsed to severely damaged to usable but not well maintained. Gyumri’s municipality recognizes the great importance of the historic district – that it is the key to developing the economy through tourism – and has initiated programs that coincide with AiP’s efforts: 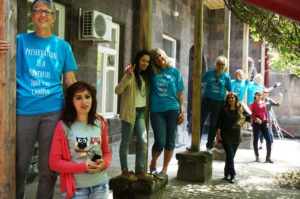 AiP is launching new efforts to foster small business development among community members. Our first priority is identifying homeowners within the historic district who are motivated to open a B&B in their home.

Equally important is AiP’s plan to establish a summer field school that provides training and hands-on experience for university students from a variety of disciplines, from engineering to architecture to business. These international students will be a steady source of support for local residents in both building conservation and small business training. 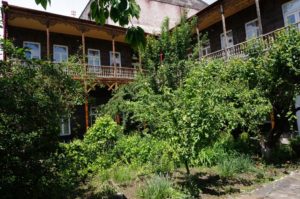 “Our museum staff served 10,180 visitors in 2017, including 4200 school children, who were able to come here to tour and learn. School programs are handled with no additional budget. My staff is starting to develop a new way of thinking about our damaged buildings, because of what they saw AiP volunteers completing. They see new possibilities,” says Vahagn Ghukasyan, Director of the Aslamazyan Gallery.

If funding becomes available, the city would like to move forward with a project to purchase the historic Yuzbashyan house and transform it into an artisans’ center with space for work and sales. Gyumri has long been known for its artisans, especially in ironwork, and they continue to excel at their craft.

It is important that we don’t leave the rural areas and small villages behind. A former restaurant has been selected in a village 7 km from Gyumri, which will become a small hotel with restaurant. 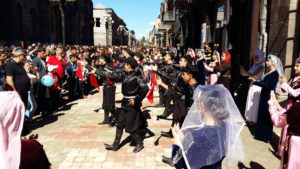 This site has beautiful views of Mount Aragats, an isolated four-peaked volcano, a draw for visiting tourists. Development of this site will play a strategic role in supporting a sustainable economy for the village, creating jobs and decreasing emigration.

Long-term goals include moving residents from inadequate domik housing into restored historic residences in the Kumayri historic district. There are a number of obstacles to work through – absentee ownership, introducing the concept of affordable housing, increasing the numbers of skilled conservators and construction workers – but after all that Gyumri has faced, these issues can be tackled as well.

Follow Gyumri’s progress and find ways you can help them revitalize. 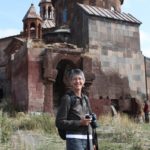 Judith Broeker is founder of Adventures in Preservation (AiP). The nonprofit was preceded by her own company, Preservation UnLtd., which ran pilot projects dealing with adobe and log conservation in Colorado and Wyoming, She is most interested in materials conservation with both research and hands-on experience gained at historic structures in the United States and abroad.

Ms. Broeker has a BA in Asian Studies and a Master’s degree in History with emphasis in historic preservation. Her experience ranges from work at Historic Boulder directed at saving the historic built environment, to research with the University of Colorado archive, to work with the US National Park Service on National Register and HABS/HAER documentation.

Judith received specialized training at historic sites such as the Native American Acoma Pueblo, the historic city of Kula, Turkey, and at a historic guest ranch in the Rocky Mountains as well as other locations. Combining travel with hands-on training in adobe conservation, lime plaster technology, and masonry and wood conservation was the source of her idea for AiP’s hands-on volunteer vacations. For her, nothing is better than exploring a historic site with camera in hand.