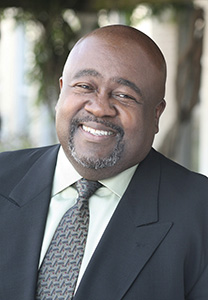 The Guest Article for REVITALIZATION was written by Elliott P. Laws.

It had never been tried before.

Environmental response trusts were nothing new. A company goes bankrupt and, if the assets were sufficient, a bankruptcy court allocates cleanup funding and appoints a trustee to administer the funding and oversee the work of remediation contractors. Disposition and redevelopment of the properties were a secondary concern, and often left to local communities without any support.

This time, the circumstances were different, more urgent. The bankruptcy of the former General Motors Corporation, the huge investment of federal dollars in GM both prior to the bankruptcy and at new GM’s emergence from Chapter 11, and concurrent loss of manufacturing jobs had certain devastating effects on the dozens of communities where plants were closed.

The stakeholders in the bankruptcy—the 14 states where these properties were located, as well as three federal agencies and the St. Regis Mohawk Tribe of Upstate New York—sought some mechanism by which to ensure that these properties were returned to productive use, and not left to decay as blighted economic deserts. 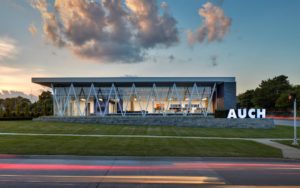 The mechanism they came up with is built into the founding documents of Revitalizing Auto Communities Environmental Response (RACER) Trust, a dual mission of both cleanup and redevelopment. Unlike the liquidation of assets in a conventional bankruptcy setting, RACER Trust must, at a minimum, consider a set of six criteria when evaluating potential property sales.

Among these: The potential for the new use to create jobs and restore tax base, and an assessment of the prospective buyer’s ability to execute the planned reuse, based on factors such as experience and access to capital.

RACER is diligent in applying these criteria, both because they are contained within the bankruptcy settlement documents that resulted in RACER’s creation and because experience has shown us that the best outcomes for communities are achieved when we select committed, capable, experienced, well-financed buyers.

It hasn’t been easy, especially in the early years of the Trust, when unemployment was high and communities across the nation were starving for new jobs and investment. We had many difficult conversations with mayors, economic development leaders and others who were frustrated when we wouldn’t sell a property for a purpose that, in our judgment, failed to maximize its potential economic benefits for the community. Dreamers and schemers were abundant, with many prospects clearly focused more on the scrap value of buildings than on creating new job opportunities for hurting communities.

All along, we have worked to build relationships in our host communities, whose views we solicited and valued as we positioned individual properties to the market. Later, as we attracted prospects and sold properties, we connected buyers with community leaders to negotiate mutually binding development agreements, another tool RACER used to reinforce the intended use of the buyer.

The results are impressive. In the seven years since the effective date of the Trust, we have closed more than 70 sales, resulting in more than $2.2 billion in planned private investment and pledges of more than 14,000 jobs.

Not every sale has borne fruit yet. This, too, has resulted in frustration for us and the affected communities and ongoing political and reputational challenges for RACER, particularly in Caddo Parish, Louisiana, and Ontario, Ohio, where buyers or major tenants pledged investment and jobs that haven’t materialized.

In Caddo Parish, an automotive startup that promised 1,500 jobs has struggled to raise capital, causing political figures who were initially supportive of the company at the outset to turn against both the company and RACER. The company is continuing its efforts to raise production funding.

And in Ontario, one of RACER’s earliest sales, the buyer agreed in writing to reuse most of the building and create a multi-tenant industrial park, with financial penalties levied by the local government for failure to create the promised number of jobs. Instead, after closing, the buyer convinced the community to agree to permit full demolition of the building.

The buyer then called out ongoing environmental remediation as the reason it had failed to attract tenants, overlooking the fact that redevelopment and environmental remediation were occurring simultaneously at several former RACER Trust properties. In April 2016, the Ohio EPA issued this buyer a covenant not to sue — an assurance that the cleanup was complete. Yet the property remains dormant.

The City of Ontario, understandably tired of waiting, moved to take action against the owner, which responded by relinquishing the property to the city at the end of November. RACER Trust is assisting the city in its efforts to find a new buyer. 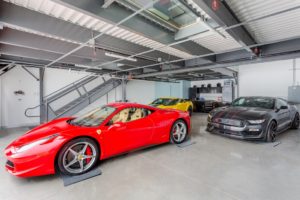 A long-vacant former GM property in Pontiac, MI., is now the home of M1 Concourse, a destination for car enthusiasts that has transformed the southern gateway to the city and attracted thousands of new visitors.

Some RACER properties do pose significant reuse challenges, particularly the industrial landfills in our portfolio, which typically have restrictions that prohibit standard commercial or industrial construction and use. We are steadfastly marketing the landfill properties to solar developers and other prospects who need land for low-impact use, such as for vehicle and equipment storage.

Another property, in Massena, New York, on the Canadian border, was an active Superfund site when RACER took ownership. Our environmental team has done a safe, efficient and effective job performing the sprawling, complex remediation of this property and preparing it for redevelopment. We expect to complete active remediation by the middle of 2019 at the latest, and will thereafter work closely with the U.S. EPA to have the property removed from the Superfund program.

But even with the property listed as a Superfund site, we have developed several leads and are encouraged by the prospect of potential sales that could result in new jobs, new tax base and other benefits for the community.

We didn’t wait for the Massena property’s Superfund delisting, or for the industrial real estate market to turn around. Our redevelopment team pursued leads and prospects, marketed our properties on multiple platforms and at national and international conferences and events, and stayed informed about the availability of state and local incentives.

As market conditions improved and demand increased, all of this groundwork helped RACER convert prospects into buyers who understood and accepted RACER’s mission, including property access after closing to conduct necessary environmental activities. 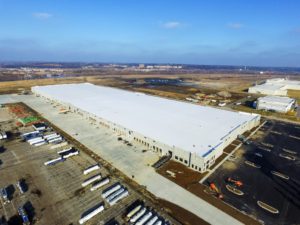 NorthPoint Development is building Central Industrial Park on a former GM property in Kansas City, KS, that had been vacant for 25 years. It was the firm’s first brownfield redevelopment project.

It is inspiring and rewarding to witness the redevelopment of RACER properties, especially having weathered the struggles that sometimes preceded the sales. As one example, a 74-acre property in Kansas City, Kansas, vacant for more than 25 years, was sold to a local development company that had never built on a brownfield but whose vision for redevelopment was supported by the city.

The sale closed before environmental work was completed, and we coordinated closely with the developer to complete aggressive remedial work while the site was developed and marketed.

Today, the remedial work is complete and the Central Industrial Park in the Fairfax Industrial district is on its way to fulfilling the buyer’s pledge of 2,000 jobs. The same buyer purchased our property in Lordstown, Ohio, and is under contract to buy a cluster of four properties in and around Lansing, Michigan.

We are watching properties and communities being transformed. In Flint, Michigan, manufacturing has returned to the vast Buick City property, with American Spiralweld Pipe operating on the north end of the property and Lear Corporation on the south end, resulting in hundreds of new jobs. 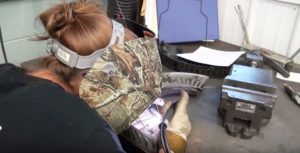 In Pontiac, Michigan, former RACER properties have been turned into a manufacturing center for light-weight automotive underbody assemblies and small jet engines, a center for classic and sports car enthusiasts, a headquarters for a venerable local construction management firm, a multi-tenant industrial park and an addition to a thriving youth sports complex.

In Indianapolis, Indiana and in Ewing Township, New Jersey, buyers have exciting, locally supported plans to build large-scale mixed-use projects that will dramatically change the look and feel of both properties and their relation to the larger community.

We are proud that our work is resulting in positive outcomes for our communities. But our full satisfaction will come only after each of the properties in the RACER Trust portfolio are producing the greatest possible degree of community benefits. That does not mean each property will be producing hundreds of jobs. 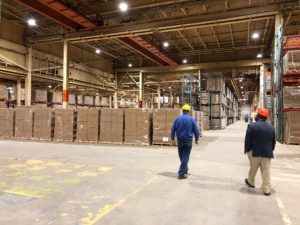 Challenges remain, but experience also has reinforced the value of persistence and follow-through. In Fredericksburg, Virginia, we were days away from seeking bids for demolition of the manufacturing building, which after RACER’s extensive marketing appeared to be seen by the market as obsolete and not suitable for other industrial uses.

Clearing buildings and marketing properties as vacant land for redevelopment was a successful tactic for our Willow Run property — now the American Center for Mobility, an international proving ground for automotive research and development — and our Indianapolis property, where the buyer has plans for a $500 million mixed-use project that will dramatically change how the city uses its riverfront, among other significant improvements.

RACER works very closely with the spectrum of community leaders to understand local and regional development priorities, and with regulatory agencies to implement cleanups that are safe, effective, efficient and supportive of development. In so doing, we are best able to position each property to capture new investment and jobs for our communities, with all parties clear about the available information, expectations and responsibilities throughout the negotiating and purchase process.

Our overarching goal is to help communities that were hurt by the GM bankruptcy. We are committed to carrying out our mission fully and faithfully.

RACER has one chance with each property to come up with the best outcome for disposition and reuse. We are determined to make the most of that chance.

All photos courtesy of RACER Trust. 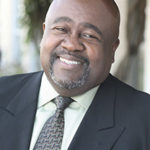 Elliott P. Laws was appointed by the U.S. Bankruptcy Court as Administrative Trustee of RACER Trust, which manages remediation and marketing of former General Motors properties at 89 locations in 14 states. Mr. Laws oversees all aspects of the Trust as Administrative Trustee, a duty he has fulfilled since RACER was formed in 2011. Under his leadership, RACER Trust has completed more than 70 property transactions, resulting in pledges of more than 14,000 new jobs and $2.2 billion in new private investment in RACER communities.

Mr. Laws is a former official of the U.S. Environmental Protection Agency, where he served as assistant administrator for Solid Waste and Emergency Response under President Clinton. In that role, he was responsible for regulatory and policy development and implementation for solid and hazardous waste management. This included the Superfund, RCRA, brownfields and underground storage tanks programs. Prior to his role at EPA, Mr. Laws was an attorney at the U.S. Justice Department; president of safety, health and environment for Texaco Inc.; and a Manhattan assistant district attorney.