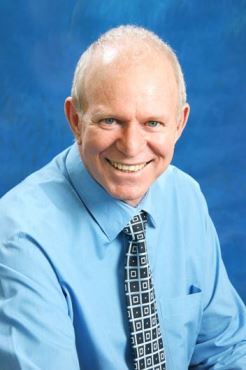 South Africa is a mature mining economy, once the largest producer of gold in the world (Hart, 2013). The majority of the gold-bearing ore body is found in a complex reef package that generally strikes to surface on an east-west plane. There are four hydrologically defined mining basins in the Witwatersrand Goldfields – Eastern, Central, Western and Far Western.

The only deep level mining still taking place is in the Far Western Basin. In all other basins the escalating cost of labour and energy has distressed the mining companies and dewatering has become prohibitive (Turton, 2015a). This has flooded the other three basins with decant to surface of highly acidic mine water, occurring in 2002 at 18 Winze Shaft on the Tweelopies Spruit, close to the continental watershed divide that separates the Limpopo and Orange River Basins.

The highly acidic decant has left a complex uranium plume (Coetzee et al., 2006), including the sediment of the Tweelopies Spruit, one of the many tributaries of the Limpopo River. A larger plume of uranium is found on the opposite side of the watershed divide, migrating down the Wonderfontein Spruit, a tributary of the Mooi that flows into the Vaal and ultimately the Orange River (Wade et al., 2002; Winde, 2010), posing a risk to the Zuurbekom karstic well-field that provides some of the water to the city of Johannesburg (Hartnady et al., 2012).

The gold mining industry is now deeply distressed, with disinvestment taking place as capital migrates out of the country. This has left behind large swathes of land that are mining-impacted but also unrehabilitated. The legacy of Apartheid is such that insufficient money was set aside to fund rehabilitation post-closure, so the country faces a stark reality as the natural dynamics of disinvestment drive marginal companies into insolvency. There are three main consequences of this (Turton, 2015b) if left unmanaged: 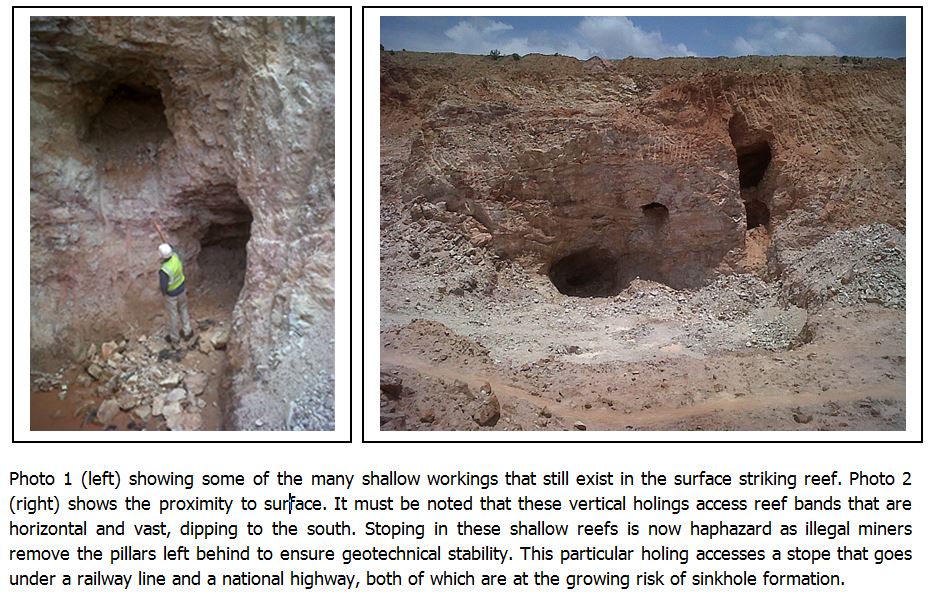 The fundamental problem is that the regulatory framework under Apartheid did not make adequate provision for post-closure rehabilitation. There is now insufficient resource left to retroactively fund rehabilitation. The pivotal question is thus how to attract capital back into Brownfield sites in such a way that rehabilitation can be funded in the absence of adequate financial resources that should have been set aside over more than a century of mining. The response to this is an experimental process known as Rehabilitation Mining, also referred to as Closure Mining.

The logic being that rehabilitation generates a quantifiable benefit accruing to society, so this can be brought onto balance sheet and used to offset century-old environmental liabilities that would render the company insolvent if not dealt with in this manner.

More importantly, if uranium can systematically be removed from source, then the cumulative benefit arising from the reduced movement of pollution plumes can also be calculated and used as a multiplier to make a viable investment case for Brownfield sites with massive environmental liabilities.  This is done by concurrently reprocessing surface tailings that contain both uranium and gold along with hard rock found in surface striking reef (see Figure 1). 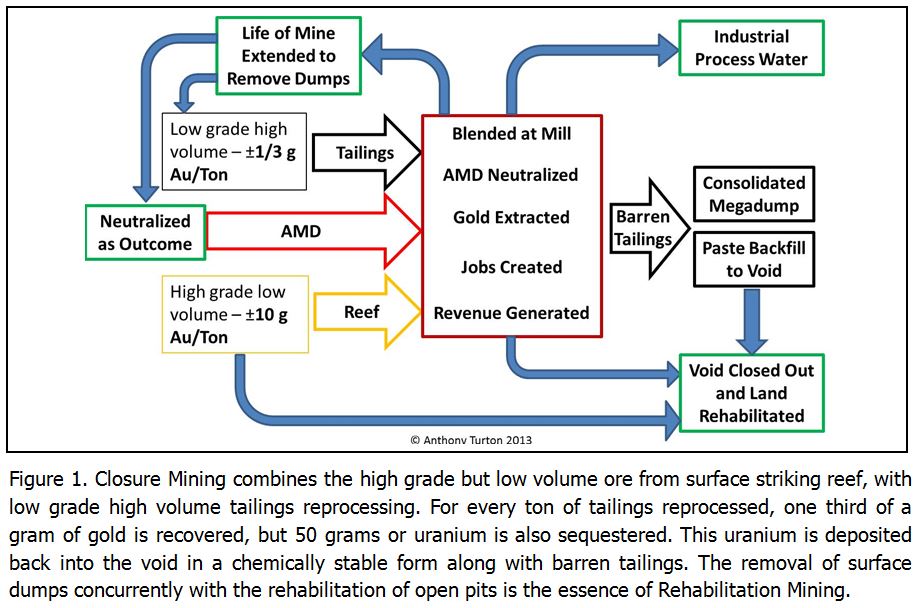 Closure Mining as a Regulatory Mechanism for Brownfield Site Rehabilitation

An example of this is found in the rehabilitation of a surface striking reef adjacent to 18 Winze Shaft (the only active AMD decant point). This was done by means of an open-cast operation known as PSG 4, which removed all surface striking reef to a depth of about 40 metres. The pit was backfilled with waste rock and covered with top soil as shown in the sequence of Google Earth images below.

There have been many lessons learned from this rehabilitation process. The most significant being that rehabilitation of mine impacted landscapes can be incentivised by offsetting the historic liability held on the books of the company against the value of the land being released for higher economic use post-closure. This is not yet recognized in the South African regulatory environment, but engagement between all stakeholders (including investors and regulators) is encouraging.

The PSG 4 case proves that if regulatory reform can accurately quantify the benefit of rehabilitation, and allow it to be offset against historic liabilities in an open and transparent way, then capital can be attracted back into the Brownfield mining sites of the Witwatersrand Goldfields. This has major implications for the rehabilitation of the uranium pollution (Coetzee, 1995) that will confront the city of Johannesburg if marginal mining companies become insolvent and the environmental liability is effectively nationalised (Turton, 2015b).

It also has significant implications for the stabilization of land, including highways, railway lines and buildings, under which shallow stoping by illegal miners is actively taking place in a haphazard manner. More importantly this has the potential to create jobs in a sector currently shedding jobs by the thousands as major mining companies divest their toxic assets, encumbered by a century of unfinanced environmental liability.

This is a work in progress, so the final outcome cannot be accurately predicted at the time of writing.

Turton, A.R. 2015(a). Untying the Gordian Knot: Unintended Consequences of Environmental and Water Policy for the Gold Mining Industry in South Africa. In Water International (Special issue on mining). 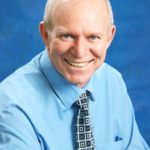