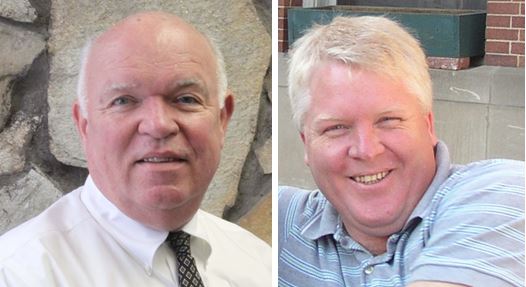 A Guest Article for REVITALIZATION by Milan Wall and Kurt Mantonya. 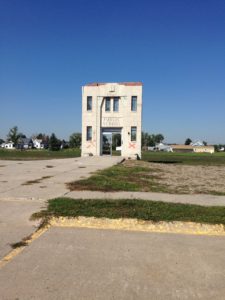 Entrance to the local school after the tornados.

One of the community’s two churches was destroyed, as was a middle school serving the combined Wisner-Pilger school district with the community of Wisner (pop. 1200), seven miles away. The unusual dual twisters made national news, and offers of emergency assistance began pouring in from around the country.

There was very little time to ponder the question, “Why did this happen to our community?” nor was there any “Woe is me” attitude. Instead, Pilger residents, along with their neighbors in Wisner and Stanton County, rolled up their sleeves and started the recovery and rebuilding process.

Once the severely damaged buildings and landscaping had been bulldozed and moved aside, the 200 or so residents who remained, along with those wanting to return, began wondering what their town could look like in the future. No one seriously considered the possibility of abandoning what was left of the community.

In late August of 2014, the Heartland Center for Leadership Development received a call for help from Pilger community leaders. The call came from the president of Midwest Bank, a family-owned chain of banks in eight Nebraska communities, ranging from tiny Pilger to the capital city of Lincoln (pop. 250,000). 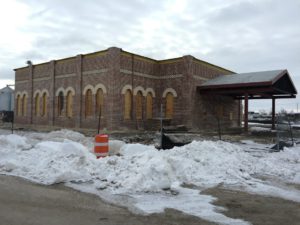 Midwest Bank rebuilt after being destroyed.

Now in its fourth generation of bank ownership, the Cooper family had retained the original bank in Pilger as the chain’s headquarters.

Soon after the massive devastation that leveled the main bank building, the owners announced that they intended to rebuild. The Co-Op followed suit, and the volunteer fire department said it would replace its building, which was also destroyed.

By early September, the city clerk and her husband had replaced their home with a brand new one, and other homeowners were looking into the options to replace or restore their residences.

The Midwest Bank president explained a critical question facing the community in this way: “If we are going to rebuild our bank in Pilger or a resident wants to rebuild their home, we need to know where the streets are going to be!” 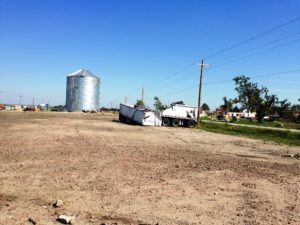 Only one grain elevator survived the devastation.

With the help of a longtime northeast Nebraska leader and recently retired director of economic development for Northeast Community College, the bank president reached out to the Heartland Center for Leadership Development. Heartland Center staff immediately contacted other resources such as the University of Nebraska Rural Futures Institute to rally partners for a community re-visioning process.

The Rural Futures Institute (RFI) is a University of Nebraska commitment to make the resources of the university’s five campuses available to help rural communities develop and implement the kinds of strategies that they themselves find useful to grow or maintain their communities and regions. RFI already is having an impact beyond Nebraska, with projects engaging colleges and universities in six states, impacting viability in 70 communities.

What the Heartland Center, RFI and additional partners comprising a Pilger “re-invention” team accomplished in two years is considerable: 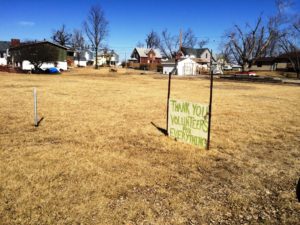 In total, 18,000 volunteers from every state in the union ended up helping the community through the first few days and on through the next several months. Famed 90’s Poison front man and TV personality Bret Michaels, who was on tour in the area, donated his time as well as his band to the recovery efforts.

The Heartland Center, in collaboration with those partners mentioned above, helped the citizens of Pilger come together to think about the future of their town. Dozens of area residents attended a series of community meetings.

A preliminary meeting of community leaders in early September 2014 brought together 70 people to begin a visioning and strategic planning process known as “Reinvent Pilger.” In late September, 150 people gathered at a Pilger community town hall meeting at the city auditorium in Wisner. They established eight task forces, comprising community residents, who developed strategic action plans to help reinvent their community. 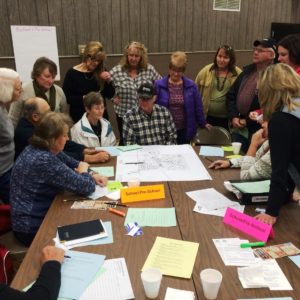 Those task forces were organized around these topics: Community Center, School/Pre-School, Sustainability/Trees, Bar/Restaurant/Coffee Shop, Recreation, Communications, Community Clean-Up, and People Attraction/Branding. Each task force identified an initial focus for its attention and named two co-chairs. The Heartland Center facilitated monthly check-in calls with the leadership team and other partners to include updates from the Village Clerk and the task forces, as well as agenda-setting for town hall meetings and other events.

Follow-up town hall meetings were held in 2015 and 2016, at which time the strategic plan was completed, as well as a parallel yet integrated land use planning process that the community undertook with the assistance of students and faculty from the University of Nebraska-Lincoln College of Architecture. The Heartland Center published a periodic electronic newsletter for everyone who attended one of the community meetings plus resource agency representatives or anyone else who asked to join the list. The Rural Futures Institute produced a short video documenting the process and outcomes of the town hall meeting in late September 2014, and that video received widespread distribution to regional media outlets.

LaRayne Topp, a local newspaper reporter and author who lives in the area, published “Eighty-One Seconds: The Attack and Aftermath as Tornadoes Hit Pilger, Stanton, Wakefield and Wisner, Nebraska,” in 2015. This oral history documents 200 first-hand interviews with residents as well as those who helped in rescue.

Prior to the tornadoes, Pilger, like many small towns, was already struggling financially. With a dwindling population and aged housing, tax revenue continued to decline. The community was laden with debt from USDA for infrastructure improvements such as a new sewer system. Street maintenance and a swimming pool bond as well as general operating expenditures further put a burden on Pilger’s coffers. But there was hope.

Midwest Bank was the first to say that they would re-build, but with the upcoming harvest, the Co-Op was the first to break ground and had bins available for storage by corn and soybean harvest by fall. They also completed their ancillary buildings such as fertilizer storage, multi-suite office space and repair shop. Midwest Bank completed its new construction in June of 2016. A convenience store known as Pilger Pride also opened its doors in June 2016. Although 70 houses were razed, many of these in dilapidated condition were replaced with 15 new houses, whose tax value exceeded that of the houses destroyed. 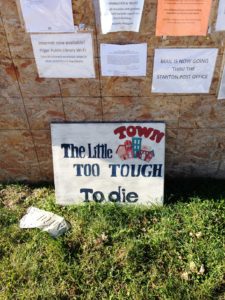 Pilger’s motto: The little town too tough to die.

The community center was completed after a capital campaign to raise $2.5 million for construction and an operating endowment. This 8,800 square foot facility serves as the community’s new focal point. In addition to conference facilities, a fitness center, commercial grade kitchen and senior center, this facility has the capability to provide education benefits to the Pilger community and the larger area with a variety of programming, such as preschool and early childhood classes, adult education opportunities, online programming and entrepreneurial activities.

As devastating as the twin tornadoes were to Pilger, the storm literally created a “clean slate” upon which to envision a new future with the infrastructure and amenities needed to draw new residents. Pilger’s location enjoys two specific advantages: First, its close proximity to three larger trade center communities and, second, a beautiful river and several lakes, providing a variety of recreational opportunities.

A third and closely tied advantage is Pilger’s reputation as a family-friendly and safe community for rearing children. These advantages coupled with the resiliency of the citizens of Pilger will ensure that Pilger will not only survive, but flourish for a long time to come. 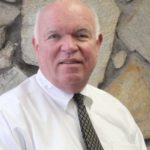 Milan Wall is co-director and founder of the Heartland Center for Leadership Development, is a management and communications expert with more than 40 years’ experience dealing with the critical issues facing American society and culture.

He has been a newspaper reporter and editorial columnist, a university lecturer and a speaker at regional and national conferences on such topics as educational leadership, economic development, and uses of technology in education. Before he helped found the Heartland Center, he was executive vice president of the University of Mid America, a multi state consortium that was recognized internationally for its imaginative approaches to adult education.

Milan is co author of a number of publications on leadership and community development, including The Entrepreneurial Community: A Strategic Leadership Approach to Community Survival, Clues to Rural Community Survival, and Eight Challenges Facing Community Leaders. Previously, he served as editor of the Nebraska School Leader, which won three national awards for excellence among state publications on education during his tenure. In 1993, Mr. Wall was honored with the Award of Excellence, the distinguished alumni recognition of the University of Nebraska Lincoln College of Education and Human Sciences. In 2014, he won the Community Development Achievement award from the Community Development Society. 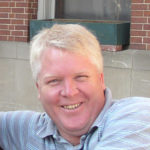 Kurt Mantonya is an applied anthropologist with over 20 years’ of experience in the Central Plains and Southwest working with Native American and Latino communities, project coordination, collaborative community based planning and evaluation of programs. As senior associate at the Heartland Center for Leadership Development, Kurt is responsible for helping design training curricula, facilitate workshops, conducting research projects and project monitoring. He’s been involved in numerous projects in rural America helping communities identify and prioritize betterment projects, economic development initiatives and expanding leadership capacity.

Kurt received a Masters Degree in Anthropology from the University of Nebraska-Lincoln in 2002 and a B.S. in Sociology from Kansas State University in 1994. Before joining the Heartland Center, he served as program director of the AmeriCorps and AmeriCorps*VISTA programs for the City of Lincoln, Nebraska, Parks and Recreation. He lives in Lincoln with his wife Becky and three children.