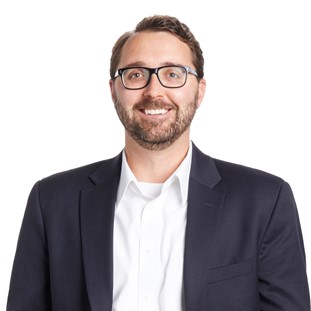 This Guest Article for REVITALIZATION was written by Aaron Domini.

About 30 miles east of Columbus, situated at the junction of the forks of the Licking River, sits Newark, Ohio, the county seat of Licking County. With an estimated population of nearly 50,000 people in the 2017 census, Newark is Ohio’s 16th largest city.

The area is also known for the still-evident extensive earthworks of the Native American Hopewell culture, of which the Hopewell Ceremonial Earthworks is slated for UNESCO World Heritage recognition in 2019.

The recent Newark Downtown Revitalization Project acted as the catalyst for the resurgence of what had become a faltering downtown. Since the project commenced in 2014, the city’s urban center has seen gains in population, jobs and economic-generating activities—and renewed expression of Newark’s unique identity and sense of community, and most importantly, pride and optimism for the future. 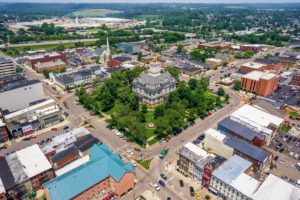 This could potentially affect the American vernacular centerpiece of this square: the exquisite Licking County Courthouse, built in 1878 and designed by architect Henry E. Myer of Cleveland in the Second Empire Style. The historic courthouse was also the focus of revitalization efforts, recently completing a $9.2 million Phase 1 restoration.

The city’s forward-thinking leadership recognized the opportunity to turn a traditional infrastructure project into a placemaking and economic development strategy. In 2013, architecture, engineering and planning firm OHM Advisors was asked to lead an extensive community planning initiative to examine how a traditional engineering project could evolve into a placemaking and community development strategy for the City.

Through a series of stakeholder and public meetings, a community vision emerged that called for a more pedestrian-friendly downtown, with a focus on streetscaping, wayfinding, and enhancing the existing transportation network.

The goal was to improve the image and brand of the Downtown, and in turn, the overall economic competitiveness of the area. The resulting solution included an improved transportation network and distinctive urban environment – featuring green infrastructure, an expanded public realm and streetscape allowing for outdoor dining and entertainment.

Integral to the comprehensive streetscape redesign that accompanied the water and sewer line replacements was the conversion of four one-way streets and the de-signalization of four intersections transitioned to four mini-urban roundabouts at the corners of the courthouse square.

This achieves a safer mix of pedestrian and vehicular traffic, and enhanced access and wayfinding to local businesses and attractions including the historic Midland Theater on the square.

In remedying what was once a major barrier to downtown growth and development, the enhanced transportation network gives downtown visitors newfound access—complete with wider sidewalks, crosswalk articulation, a distinct gateway and a comprehensive redesign of the streetscape. 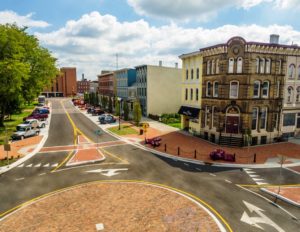 As part of the revitalization project, the new streetscape incorporates substantial green features, including 35,000 sq. ft. of low maintenance plantings, more than 130 shade-bearing trees, and 12,000 sq. ft. of bioswales—designed to manage a specified amount of runoff from large impervious areas, such as a parking lot or roadway.

In addition, the project creatively used the original 100 to 200 year-old brick pavers that were excavated during the project, recycling and repurposing them into the overall streetscape.

Moreover, the city was able to successfully apply for green infrastructure funds, part of the revitalization’s remarkable link between design and funding. 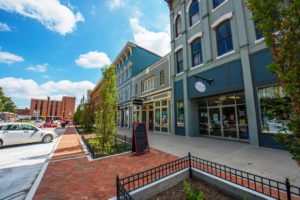 Green infrastructure elements of the project not only enhanced the urban downtown fabric, but provided the City access to sustainable design funding. Bioswales minimize stormwater runoff and capture 20% of stormwater, reducing river pollutants by 30% – improving infrastructure, water quality and quality of life downtown.

This project embodies public-private partnership success among the City of Newark, Newark Development Partners (Newark CIC) and the private development community. It commenced with the initial $30 million dollar public investment; an unprecedented amount for the city.

The tenacity did not go unnoticed on the part of private investors. The development community recognized the transformative potential of the Newark Downtown Revitalization Project to improve economic viability and redefine Newark as one of Central Ohio’s most dynamic, flourishing mid-sized communities.

It responded with a renewed interest and energy to reinvest and grow the local economy, with a strong focus on the renovation of many of the historic structures in and around the courthouse square.

This investment is estimated at $60 million in a variety of private and public/private projects including:

The revitalization efforts have been embraced by downtown property owners, who recently voted to approve a Special Improvement District that both maintains the downtown and promotes community events held downtown.

In less than five years, the $30 million in public sewer separation and related investment has provided the catalyst for more than $60 million in private development. The remarkable growth not only benefits Newark’s downtown core, but the entire city and broader metropolitan region. 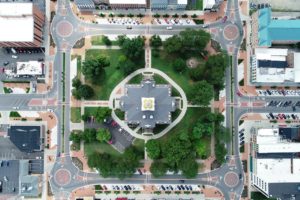 The Newark Downtown Revitalization Project is a public project with significant market impact. Foundational to this story is how the project encouraged and promoted new investment in an otherwise forgotten market. In some sense, the project in and of itself created a new market in a once bustling economic hub.

Like so many revitalization projects throughout smaller communities in Ohio and across the Midwest, the question is always how to reinvent an economy that was once based on the Main Street model of shops and businesses that serve the local economy. Through the evolution of cars, highways and big box stores, these once bustling small local economies have been severely disrupted, and, in many cases, cease to exist as population, jobs and commerce have been pushed to exurban areas.

The idea of the street as an important public space in the community was a keystone pillar of the downtown renovation project; historically the place where the community gathered, stories were told and business was conducted. 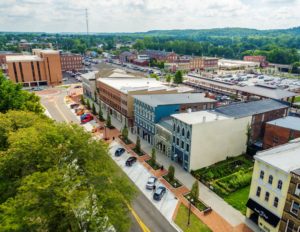 Thus, one of the keys to making small local economies like downtown Newark vibrant again, which really means increasing vehicular and pedestrian traffic that facilitates an energetic, walkable community, is in creating a distinct sense of place that is safe, inviting and useful in the broadest sense of the word.

The goal is to effectively combine residence, recreation, commerce and civic affairs in ways that enhance the quality of life, respecting traditions while introducing modern efficiencies as appropriate. This is not an exercise in nostalgia, but renewal and community advancement.

The big question for so many communities is how to fund the revitalization. This project serves as a model for how to use necessary public improvements to critical infrastructure as a “tool” to drive creative placemaking strategies.

Newark’s approach was to start by building a foundation, fixing the elements that were once critical to the economic success of the area. This investment in the under- and above-ground infrastructure (sewer, water, street, public space, public art, etc.), laid the framework by which to build confidence in the market and attract new investment in the community. As bears repeating, the original $30 million dollars of public investment has resulted in more than $60 million in new private investment.

A few facts and statistics:

The community has also discovered that success is contagious. Newark has already planned a Second Phase of its Downtown Revitalization Project, scheduled to begin in 2020.

As Newark Mayor Jeff Hall says, “Newark’s downtown revitalization has been nothing short of a community movement. The process of thinking holistically about our infrastructure, downtown framework, and identity, has driven tremendous economic success. It has taken a team of forward thinking planners and engineers, and city and community leadership to rethink our downtown, and return it to a thriving community and regional destination.”

The Downtown Revitalization Project serves as a lesson in best practices for transforming a traditional infrastructure project into a unique placemaking and economic development strategy, spurring private development to accomplish even more. It realizes a community’s vision to not only restore 20th century glory, but to soar into the 21st century. 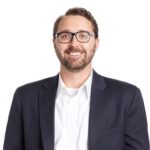 Aaron Domini is Principal and Senior Planner at OHM Advisors. Aaron’s vision is integral to the firm’s planning projects across both urban and suburban communities. He has led comprehensive and strategic plans, vision plans, corridor and transportation projects, and streetscape designs with a keen focus on building deeper community ties and promoting new economic and private investment opportunities for the firm’s clients. He excels at including citizens at the heart of the planning process in every project—leading and facilitating public participation to build stewardship, consensus, and support, and to yield plans rooted in a healthy balance of market realities with community values and aspirations.

A planner with over 15 years of experience, Aaron serves as an Adjunct Professor at The Ohio State University Knowlton School of Architecture. He has presented widely at conferences on creating important public-private development partnerships, developing unique community engagement practices that reach community members in their own spaces, and on historic and urban revitalization with a focus on placemaking.