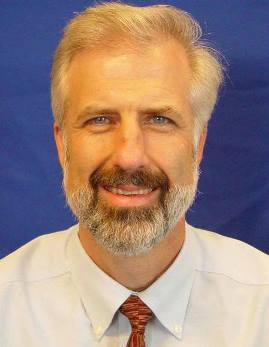 “Lavender Lake” is the derisive name given by local residents to the infamous Gowanus Canal, one of the most heavily polluted waterways in the United States. 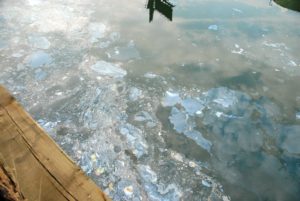 Less than two miles long, the canal was once one of the busiest waterways in New York City’s harbor. Carved out of a Brooklyn salt marsh in the mid-1800s, industry soon sprang up along the newly-built canal, including three manufactured gas plants. These plants turned coal into gas for lighting homes and streets in the decades before electricity became dominant. 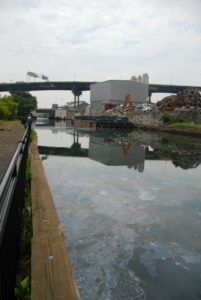 They left behind a hideous residue called coal tar. A gooey substance that never really hardens, coal tar sinks into the ground where it is dumped. When it reaches an obstruction like bedrock or clay, it oozes horizontally, often into the adjacent waterways by which the coal reached the plant.

Coal tar is infused with a witches’ brew of toxins, dominated by a class of chemicals known as polycyclic aromatic hydrocarbons. PAHs make up nearly 5% of the mud in some parts of the canal.

The mud also contains a potpourri of pollutants from other industries, including polychlorinated biphenyls (PCBs), pesticides, chromium, copper and other heavy metals.

The canal has also long served as the sewer that drains the surrounding residential communities of Park Slope, Carroll Gardens and Cobble Hill. Like most older cities, New York employed the concept of a “combined” sewer system. 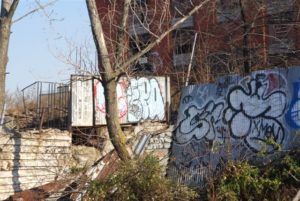 Neighborhood decline around the canal.

This means that sanitary waste from toilets, bathtubs, sinks, etc., flows in the same pipes that carry storm water when it rains. The pipes, and the treatment plants to which they lead, were designed to accommodate only dry weather flows.

During wet weather, a nasty mixture of raw sewage and rain water is intentionally discharged into nearby waterways through “combined sewer overflows” (CSOs).

The Gowanus Canal receives nearly 400 million gallons of CSO discharges annually. During heavy rainstorms a wave of brown glop washes down the canal (a phenomenon known locally as a “poo-nami.”) 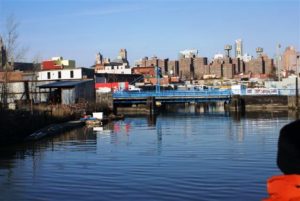 CSO discharges carry huge amounts of solids (sewage plus street runoff carrying trash and pollutants). The narrow waterway is poorly flushed by the tides, so the sewage settles out to become putrid, gelatinous mud more than ten feet thick. Because of the decline of water-borne commerce, the canal hasn’t been dredged since 1955. At low tide, mounds of sewage near the CSO outfalls are exposed, creating an intolerable stench.

Not only does the sewage smell, but it carries plenty of bacteria and viruses. The decomposing sewage also robs the water of oxygen, making it unsuitable for most marine life. And the fine particles act like toxin magnets, attracting the PAHs, PCBs and other chemicals welling up from beneath. PAHs also continue to enter the Canal via the CSO discharges themselves. 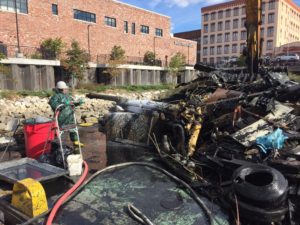 Already by the late 1800s local residents were clamoring for a canal cleanup. In 1911 the city opened the Flushing Tunnel, an underground conduit through which cleaner water from the open harbor is pumped to the head of the canal, thus creating a steadier downstream flow. But it was never enough to render the waterway tolerable for the long-suffering neighbors.

In 2009 the U.S. Environmental Protection Agency (EPA) proposed to add the Gowanus Canal to its “Superfund” list of the most heavily contaminated sites in the nation. Being home to a Superfund site is a distinction many communities wish to avoid. But the residents near the canal were virtually unanimous and very passionate in supporting Superfund designation. They hoped that engagement by the federal government might help achieve the results for which they had long been asking. 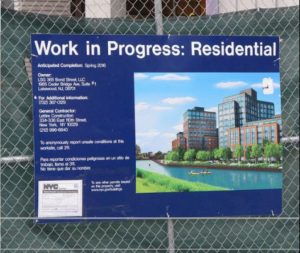 New York City’s municipal government opposed Superfund listing. The city worried that Superfund designation would create a “stigma” that would deter the hoped-for redevelopment of the area. Events proved this concern to be unwarranted.

In fact, the Gowanus area experienced a 52% increase in land prices between 2008 and 2012, the period when the U.S. housing market bubble burst, land values elsewhere plummeted, and the global financial crisis reached its height. As if to underscore the point, in December, 2013 a new Whole Foods supermarket opened on the banks of the canal.

And this trend is continuing. In the past few years Gowanus has seen further increases in rental rates and property values. New York City is actively considering plans for rezoning the old industrial areas adjacent to the Canal to allow more residential development. According to a Wall Street Journal report, speculative real estate investment in the area rose by nearly 50% from 2014 to 2015. 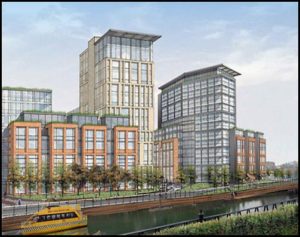 A study by GFI Realty Services credited the EPA-directed cleanup with contributing to this growth. In September, 2013 EPA selected a cleanup plan for the Gowanus Canal. The plan requires the removal of some 600,000 cubic yards of contaminated mud, followed by capping of dredged areas. The plan also requires significant CSO reductions. The overall cost of the Canal cleanup plan, including the CSO reductions, was estimated at $506 million.

The cleanup work will be performed and paid for by the “potentially responsible parties” or PRPs. These include National Grid, the corporate successor to the gas plants that generated the coal tar; a score of companies that carry the legal liability for other factories that closed decades ago; several agencies of the federal government; and New York City. 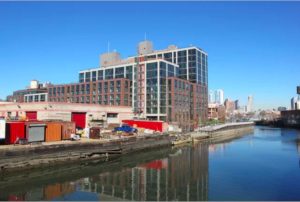 Residents are seeing the first new canal buildings in a long, long time.

EPA has piloted two major demonstration projects in the past two years. One was to demonstrate the “in situ stabilization” of the mud that is a necessary part of the selected cleanup option.

Gowanus area residents can finally look forward to the time when the name “Lavender Lake” will be an obscure anachronism.

All photos provided by author. 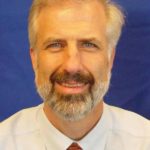 Walter Mugdan is Director of the Emergency & Remedial Response Division in the Region 2 office of the U.S. Environmental Protection Agency, located in New York City.

At this writing he is on a temporary assignment serving as Acting Regional Administrator for Region 2.