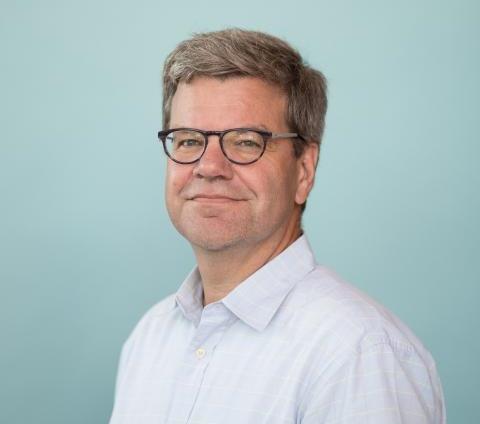 This Guest Article for REVITALIZATION originally appeared in the Bay Journal (reprinted by permission), and is written by Dave Secor.

In 1993, I began working at the Chesapeake Biological Laboratory, eager to make my mark. The attention-getting, prehistoric-looking Atlantic sturgeon looked like low-hanging fruit. They are living fossils from the time of dinosaurs, a grab bag of evolutionary pieces and parts: a vacuum cleaner mouth, a fused head shield, electric sensors, barbels, sharklike sand-paper skin and lobed tail, plus conspicuous boney plates of armor.

Also, they are giants: Atlantic sturgeon have been known to reach 12 feet and 500 pounds. They were prominent in the records of colonial Jamestown and in the late 1800s supported a lucrative caviar fishery. Yet by 1993, they were a distant memory in the Bay.

A charismatic fish, a mysterious disappearance, a stressed estuary: The science and PR prospects looked good! So, as chronicled by Karl Blankenship in the Bay Journal, I embarked on a 25-year record of media statements — and sometimes misstatements. 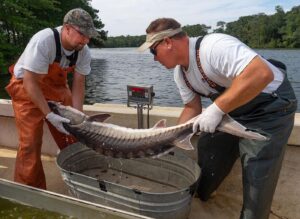 Maryland Department of Natural Resources biologists Mike Porta, left, and Matt Baldwin weigh a sturgeon they caught with a gill net in Marshyhope Creek in 2014. After the weigh-in, they collected a DNA sample and implanted a tracking device in the fish to allow them to monitor its seasonal travels. (Work performed under NMFS Permit 20314) . Photo is by Dave Harp.

I assembled a workshop of seasoned Chesapeake Bay scientists and most of us agreed that sturgeon were gone from the Bay. We had striped bass in mind — sturgeon are also fish of oceans and big rivers, returning to spawn in spring. Yet in decades of surveys and catches for striped bass, never a bycatch of spawning sturgeon.

In the 1990s, when confronted with the pound-net capture of a single large Atlantic sturgeon, I dismissed it. My quote in the November 1997 Bay Journal: “What it represents, if it is a Chesapeake Bay fish, is kind of a ghost. It’s a representative of something that once was — and probably no longer is — here.”

I scienced the heck out of their disappearance from the Bay. We filled the CBL’s three stories of seawater labs with young Atlantic sturgeon from elsewhere, enrolling them in Chesapeake water quality boot camp. The young fish fared poorly when exposed to low oxygen, and I helped to establish Chesapeake Bay Program water quality standards protective of sturgeon.

Still, I was pessimistic: “Sturgeon may be a symbol of what we’ve lost in the Chesapeake Bay. If we could bring back sturgeon, it would signify a huge change in the Chesapeake,” I told Karl for a Bay Journal article in March 2003.

That day came sooner than I could have imagined. Juvenile sturgeon started appearing in surveys, large dead sturgeon washed up, and finally directed studies discovered spawning sturgeon in the James River, then in the Pamunkey River (a York River tributary), and then in the Marshyhope Creek (off the Nanticoke River).

Now I really changed my tune: “I’m kind of optimistic,” I said in a November 2010 Bay Journal article. “I’m just pleased that we have sturgeon to talk about in the Chesapeake.”

Although a bit embarrassed by being wrong, I am also delighted. Duped by sturgeon, I became their student rather than their authority. I often reflect on how fortunate I am to be a part of this digital age, a truly unprecedented period of discovery about the hidden lives of fishes.

Throughout much of the Chesapeake Bay, hundreds of hydrophones are deployed at intervals spanning miles to tens of miles, awaiting signals from transmitters that have been implanted in sturgeon — the work of scientists up and down the Atlantic Coast.

These “dial-up” signals track sturgeon migrations and have transformed our understanding of the fish. Historically known to be springtime big-river spawners, fall spawning now seems to be the dominant behavior. Further, large adults are pushing all the way up to head of tide. Imagine, a hulking 7-foot, 200 pounder pushing through a wading-depth channel that’s narrow enough to skip a rock bank to bank.

Now I spend my days doing something I would not have considered remotely possible just 15 years ago: I am researching America’s smallest free-flowing sturgeon river, the Marshyhope Creek on Maryland’s Eastern Shore. Those familiar with Marshyhope Creek, mostly paddlers and anglers, know that the water is quite shallow in this scenic creek. Still, our team of scientists has discovered that sturgeon use all of the creek, as well as wandering downstream into the upper Nanticoke River.

We’ve discovered a persistence of clean scoured riverbed cobble (the necessary spawning substrate for these fish), and we are seeing small juveniles through sonar surveys and direct observation.

Oh, yes, I forgot, direct observation. Sturgeon jump. And not just a little. They fling themselves entirely out of the water. Knowledgeable shoreline residents set out beach chairs to watch the evening show. Indeed, on a single outing recently, I saw four large sturgeon launch themselves out of the water — so energetically that for a moment I could see their entire impressive profile, snout to tail.

Let me leave you with this gift: Enjoy sturgeon. They are a present to ourselves as citizens of the Chesapeake Bay region. Without the Clean Water Act, without Bay Program water quality standards, and without Maryland’s Chesapeake Bay Critical Area Act, it is very likely that sturgeon would no longer be with us.

Certainly, threats remain. In Marshyhope Creek, these include a critically small number of spawners, invasive blue catfish, and a proposed salmon factory (Aquacon) — a behemoth of a plant, six times the size of a Walmart — that could detrimentally alter riverbed and water conditions in the skinny waters where sturgeon spawn.

But please — enjoy. Visit the Marshyhope, particularly during September when sturgeon spawn. Take a paddle, wet a line, or stroll Federalsburg’s peaceful River Walk. If you miss them jumping — well, apologies, but I promise you they are lurking somewhere below the surface. Not a ghost, but a living breathing dinosaur-fish in our own backyard. 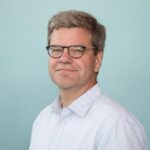 Dave Secor is a professor at the University of Maryland Center for Environmental Science, Chesapeake Biological Laboratory.

He is the author of Migration Ecology of Marine Fishes (JHU Press).