In Hamilton, New Zealand, their “urban island” known as ​Waiwhakareke Natural Heritage Park (WHNP) opened to the public on November 16, 2019 after completion of a long-term ecological restoration project.

WHNP is the flagship project for biodiversity in Hamilton. This science-based, community-led project, represents a vision of bringing back Hamilton’s native ﬂora and fauna.​ Located on the outskirts of Hamilton, WHNP is an award-winning, inter-generational ecological restoration project. 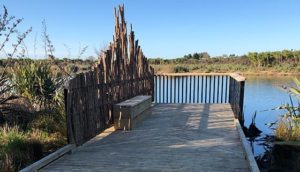 Established in 2004, the long-term aim of Waiwhakareke is to reconstruct the natural forest, wetland and lake ecosystems present in pre-European times. Intensive predator control will allow vulnerable species to flourish in an urban environment and spill over to other parts of the city.

Waiwhakareke is owned and managed by the Hamilton City Council, and its transformation is the result of more than a decade of planting and ecological restoration work by volunteers and key stakeholder organisations including University of Waikato, Wintec, Tui 2000, Waiwhakareke Advisory Group, Friends of Waiwhakareke and Waikato Regional Council.

In recent months, the Council completed the 10-Year Plan project of basic development at Waiwhakareke, including the development of a loop track, viewing platforms, and a public toilet. Interpretive information panels have also been added to the park’s barn, and they outline the history of the site and the flora and fauna species found there.

Waiwhakareke has a rich history. In pre-European times the land was a popular transport corridor for Maaori seeking stone or taking their goods to trade across the Tasman Sea. Ngati Koura, Ngati Ruru and Ngati Ngamurikaitaua all have links to the area, some dating back more than 800 years.

The name Waiwhakareke translates as (wai) water (whakareke) to plunge a pole. The forests and wetland at Waiwhakareke provided a place for food and resource gathering for Maaori. Totara, matai, kauri, flax and raupo were collected for use as building materials, textiles and rope, while plants such as hinau, kahikatea, miro and raupo were collected for food (berries and pollen). Birds which fed on the trees were also snared and trapped by Maori, while fish, eel and duck were caught from the lake.

From the 1820s European settlers began arriving in the area paving the way for the land clearances of the 1860s. Maaori activity continued in the area, particularly gum digging and the removal of Kauri from the swamps for use as waka (canoes). Over the next 40-50 years—-particularly following European confiscation of Maaori land after the Land Wars of the 1860s—drainage of the peat wetland increased. The draining of the wetlands allowed pastoral farming to establish on the land and it continues today. 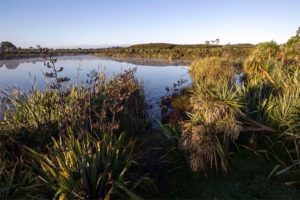 Up until the Council purchased the area in 1975, the lake was not fenced off and was used for swimming by children and also as a shortcut through the area via canoe. Mushroom collecting from the surrounding paddocks was common in autumn.

​The area containing Waiwhakareke formally came into the city in November 1989, and the boundaries of the city’s urban areas have expanded toward WHNP in recent years​.​​

Maria Barrie, Hamilton City Council’s Parks and Recreation Manager, said “We’ve be fortunate to have some incredible support on this project. Our stakeholders and volunteers have been huge contributors to the planting and developments at Waiwhakareke, and it’s great to be able to celebrate this milestone with them, and the wider community.”

The 65.5 hectare park will serve as a focus for Hamilton’s wider biodiversity restoration, including lakes and lakeshores, the Waikato River, its banks and unique gullies, and other parks with current or potential natural values (estimated to be 750 hectares).

It will bring our natural and cultural heritage to within easy reach of New Zealand’s largest inland city, and reconnect current and future generations with their environment through enhanced education, outreach and engagement opportunities.