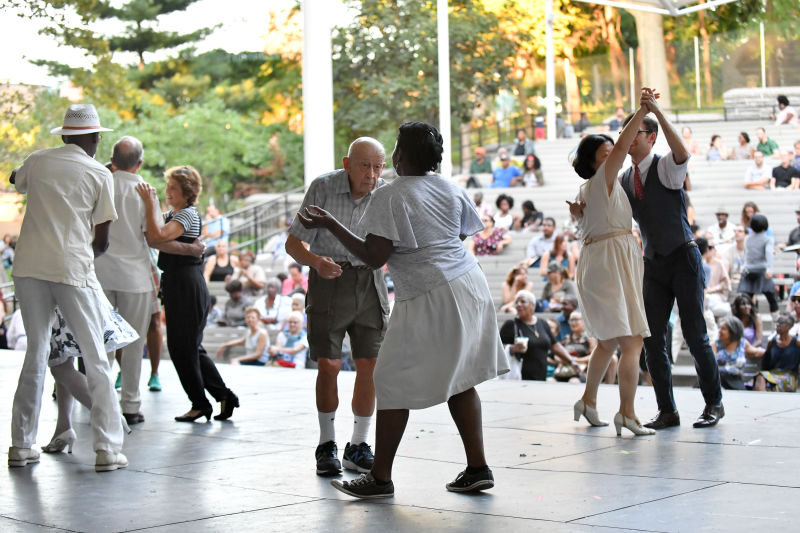 The Mount Morris Fire Watchtower was erected in New York City in 1856 after Harlem residents petitioned for its construction. It was the third of 11 fire towers erected in Manhattan. 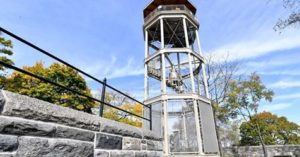 The fire watchtowers were discontinued after 1878, but the bell in the Mount Morris tower rang for years afterward. The watchtower was designated a New York City landmark in 1967 and was listed on the National Register of Historic Places in 1976.

The Fire Watchtower project is one of 648 capital projects completed since Commissioner Silver joined the agency in 2014: the administration has taken on more projects and has completed them faster—nearly 90% completed on budget and 85% on time. 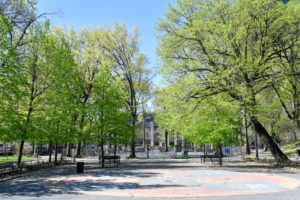 “The Mount Morris Fire Watchtower stands at the pinnacle of Harlem’s rich culture and serves as a monument to the neighborhood’s storied history. It gives me great pleasure to unveil the renovated tower and surrounding plaza, which serves as an important resource for the community,” said Silver. “By restoring the cast iron structure and adjoining landscape, we have ensured the continued survival of this significant landmark and gathering space for years to come.”

The project restored the historic cast iron structure and the surrounding landscape, ensuring the continued survival of a significant landmark for the Harlem community in a much improved setting. Many of the original components were retained, while the watchtower was brought up to current engineering standards.

“The Mount Morris Fire Watchtower is the only one that remains in New York City, and is a much beloved landmark,” said Brewer. “I am so thrilled to see it stand tall and watch over our City again, and I congratulate the Parks Department for this beautifully done restoration.”

The structure was reinforced with internal cross bracing and new stainless steel components, and the roof was restored to its original configuration based on archival photographs. The watchtower and surrounding area now also feature code-compliant guardrails, reconstructed stairs on the southwest end of the site, a reconstructed retaining wall on the northwest side and restored bluestone pavement on the upper level of the Acropolis, the plaza on top of the hill in the middle of the park where the Fire Watchtower stands.

“I am very happy to see this project which my office and a number of community partners began almost 20 years ago finally come to fruition,” said Perkins.

“It was my great honor to attend the ribbon cutting for the restored fire tower,” said Orama. “It is a testament to the work of various stakeholders that the last remaining fire tower located at Marcus Garvey Park will continue to be a historical community treasure.” 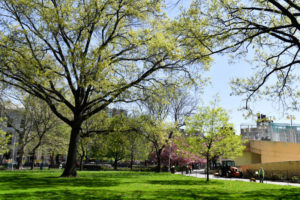 The Fire Watchtower’s reconstruction was completed in two phases. The $2.6 million dismantling project, completed in 2015, was funded by a $1.6 million allocation from former Council Member and current Assembly Member Inez Dickens; $1 million from former Borough President and current Comptroller Scott Stringer, and $75,000 from the Harlem Community Development Corporation.

“Neighbors and park users often share their memories with me, of first kisses or stories of their grandparents courting up on the Acropolis. Others recall playing there on their way home from school. I hear in their voices the importance of this unique place,” said Lee. “The return of the Fire Watchtower also returns the Acropolis to the community. I look forward to helping the community to reclaim this space. The possibilities are endless!”

“The return of Harlem’s Mount Morris Fire Watchtower in Marcus Garvey Park is the culmination of a sustained community effort to restore a historic landmark that once saved lives and will now be enjoyed for generations to come,” said Asberry-Chresfield. “This is a gathering place for the future and a reminder of how a united community can create change.”

All photos courtesy of NYC Parks.