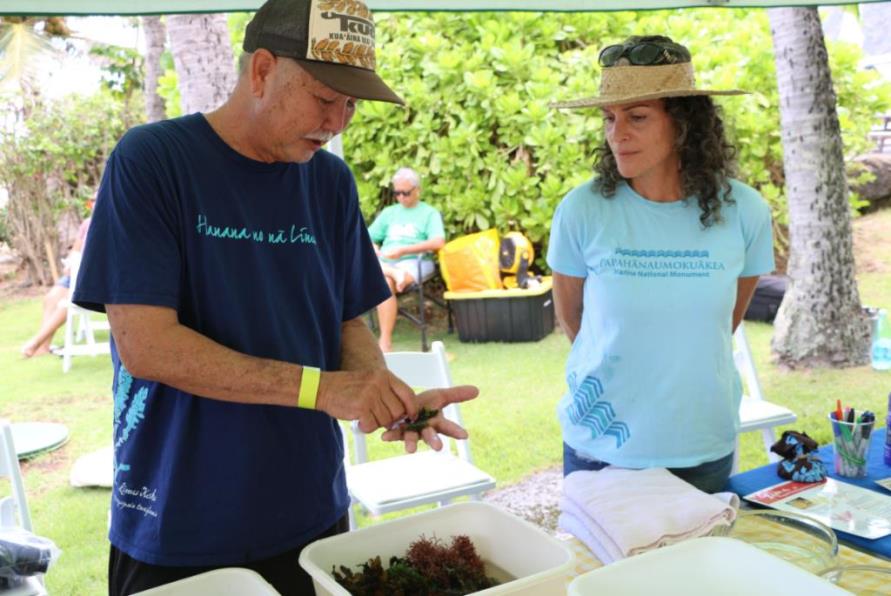 Limu, otherwise known as rimu or ʻimu, is a general Polynesian term for edible plants living underwater, such as seaweed, or plants living near water, like algae.

In Hawaiʻi, there are approximately one hundred names for the various kinds of limu, sixty of which can be matched with scientific names. 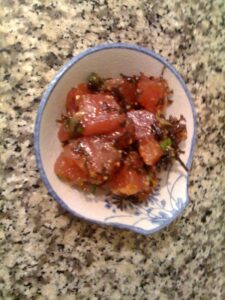 Photo of Ahi limu poke (raw fish with limu) is by Bert Kimura via Wikipedia.

Hundreds of species or marine algae were once found in Hawaiʻi. Many limu are edible, and used in the cuisine throughout most of Polynesia.

On September 24, 2022, limu practitioners, advocates, and supporters gathered for the Year of the Limu Celebration community event at Sea Life Park in Waimanalo, Oʻahu.

“The most important aspect of these projects, even more than the limu itself, is the people,” says Ito.

“Getting the kids out of the house. Involving the kupuna. Some groups make dyes from the limu and even integrate hula into their efforts. It’s a community restoration, a Hawaiian cultural restoration,” he continued.

Limu has many uses, including in food, medicine, traditional practices, and ceremonies.

It serves as the base of the food chain in coastal ecosystems, providing fish, turtles and urchins with food, and small invertebrates with protection. One limu variety, crustose coralline algae, contains calcium carbonate and is vital to coral reef structural integrity, growth, and resilience.

Over 20 species of seaweed were on display, and visitors got the opportunity to see up-close, touch, and even sample some of the varieties.

This was just one of several events held throughout this “Year of the Limu” as designated by Governor Ige for 2022.

The park provided a perfect setting as host for the event, allowing families to learn more about limu and different projects and partnership efforts taking place on Oʻahu and statewide.

“Our ancestors relied on it as an important, main component in their diet,” said Aunty Pam Fuji’i, KUA board member.

“Traditionally, there were certain foods that were kapu to women and even across classes. Limu kala was able to be shared by everyone,” she concluded.

A resolution has been introduced by Limu Hui members to the legislature to designate limu kala as the official state limu for Hawaiʻi.