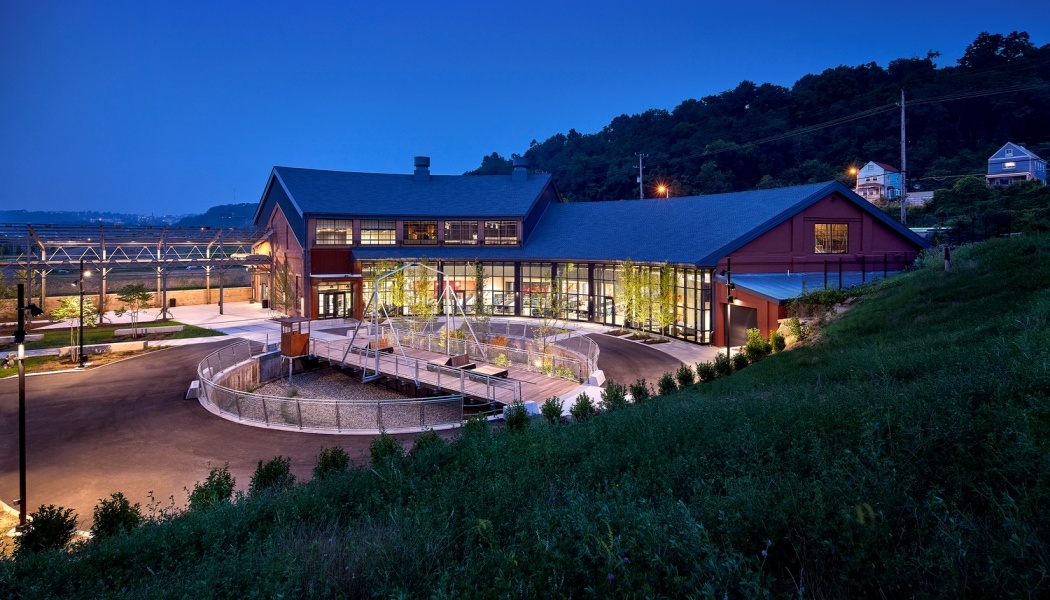 Long-time REVITALIZATION readers are well-familiar with the Hazelwood Green project in Pittsburgh, Pennsylvania. We’ve reported on the progress of this massive, ambitious revitalization on a riverfront brownfield many times over the years.

Hazelwood Green is a total of 178 acres. With 165 of those acres, the Almono Limited Partnership (Almono LP) is the primary land owner. 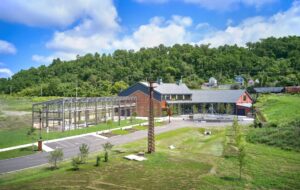 The site’s redevelopment is designed to catalyze investment in the underserved neighborhood of Hazelwood, while drawing from the deep history and culture that remains intact through the people and the physical fabric of the neighborhood.

Among the project’s boasts is the largest rooftop solar array of its kind in the country.

But, of all the buildings that have been brought back to life, the most iconic is probably the Roundhouse at Hazelwood Green, so here’s an update on its progress.

Once a home for machines, the 19th Century roundhouse at Hazelwood Green welcomes 21st Century researchers and entrepreneurs. 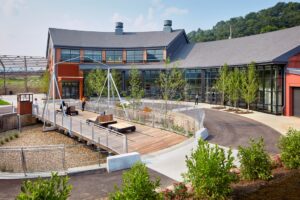 Part of the shuttered, 178-acre J & L Steel Mill, the 10-bay roundhouse originally serviced and turned train engines, redirecting the materials they carried to different stops in the production process.

Now, as a technology accelerator and co-working space for OneValley, the roundhouse will not only speed the delivery of groundbreaking innovations, it will be the first project tracked against Pittsburgh’s new resiliency standards.

Preserving this important piece of Pittsburgh’s past, the design uses a light touch to celebrate the existing structure while adapting it to a human scale.

Partially built into a hillside, the roundhouse was a cavernous two-story space, darkened by decades of industrial use and abandonment, but the removal of a century of soot from the brick walls and underside of the pine roof deck warms the interior. 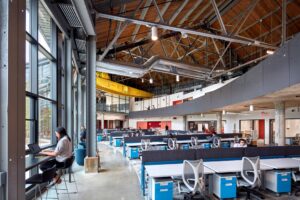 The addition of a partial second floor provides more office space (and a featured, glass-walled conference room) while also scaling the space down for its human inhabitants.

At the same time, the removal of unnecessary walls and the replacement of its giant garage doors with windows enables occupants to appreciate the volume of this light-filled space.

The giant windows where the garage doors once were also open views to outside, where a new public space uses native plants to integrate the site’s industrial remains—its turntable, the steel frame of an old shed—into the landscape of the Monongahela River.

There is no site of this scale and potential that is more uniquely situated within the urban context of the Pittsburgh region. 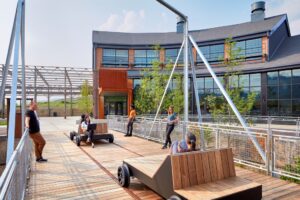 It’s where research and talent is being grown and fostered within premier universities, where local neighborhoods remain unique and affordable, and where the real estate market demands creative financial solutions.

Almono LP says that the multi-dimensional opportunities presented by this site and its neighborhood require a thoughtful and collaborative approach to redevelopment that respects the past and reflects its present-day culture, while also creating new and lasting models for urban place-making.

They add that they are working to create a future for this site that provides economic opportunities for all and serves as a regenerative steward of its unique natural assets.

All photographs are by Ed Massery.