Once a Houston, Texas destination for shopping, movies and visits with Santa, the site of Northwest Mall is poised for revival as a bullet train terminal.

On February 5, 2018, Texas Central Partners and Houston-area elected officials announced that the company, which is seeking federal approval for a 240-mile high-speed train line, has chosen the dead mall’s 45-acre property as its preferred site for the southern terminal. 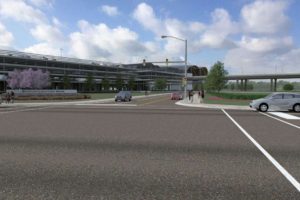 Houston Mayor Sylvester Turner said the announcement was evidence of a dramatic change in how and where people will travel in the region. “We are moving to a new phase in this city,” Turner said.

Turner said the train will better connect Houstonians to northern Texas, boost redevelopment north of Uptown and revive a mall that, “has pretty much been kind of … dormant for a long time.” Only a tiny percentage of mall stores remain open, and those are just the ones with exterior access.

Redeveloping the site into a major rail hub attracting some 18,000 travelers daily will likely spawn new restaurants, shops and hotels in the area. Trains will leave every half hour, arriving in Dallas about 90 minutes later.

The city also hopes to create a light rail connection between the high-speed train terminal and downtown Houston. 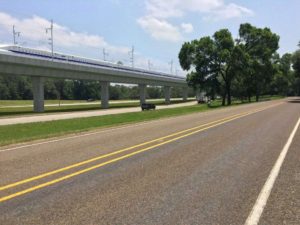 In a city whose official seal boasts a train as a symbol of progress, Mayor Turner and the Texas Central railroad company reached agreement back in August of 2017 to work together on an economically revitalizing, jobs-creating plan for a bullet train that will revolutionize travel in the state.

Turner and Texas Central, developers of the high-speed train between Houston and North Texas, unveiled the joint agreement in support of the project, including proposed traveler-friendly connections between the new train station and the greater Houston region.

Texas Central will consult with the city on finalizing Houston’s passenger station site – in the general area south of U.S. 290, west of Loop 610 and north of Interstate 10 – near major employment centers including the Galleria, Medical Center, Energy Corridor and Downtown.

The action marks the most significant embrace yet between Houston and Texas Central as it moves forward on the innovative passenger line connecting the state’s biggest metro areas in 90 minutes, with a midway stop in the Brazos Valley.

It comes just days after Texas Central announced that Irving-based Fluor Enterprises and The Lane Construction Corporation will handle pre-construction planning, scheduling, cost estimating, design and engineering services, and will be the preferred design build group after the financial close.

Tim Keith, president of Texas Central, praised the city, noting that “over the project’s entire history – from conception to development, and now into the construction phase – Texas Central has had a strong partnership with the city of Houston.”

Turner said Texas Central’s unique investor-led model, combined with the immense scale of the more than $10 billion project, creates a real opportunity for Houston – which so dominated Texas rails that it once was known as the place “where 17 railroads meet the sea.”

“As I shared in my State of Mobility address, Houston needs a paradigm shift – a comprehensive approach to mobility that includes all forms of transportation,” Turner said. “Certainly, a high-speed train to Dallas is a glowing idea among the options, especially when state transportation officials project traffic congestion on Interstate 45 between Houston and Dallas will double by 2035, increasing travel time from about 4 hours to more than 6.5 hours. Simply building more highways is not the answer.”

Turner said the city will work with TCR to make sure there is a wide choice of transportation options into the Houston area from the Houston train station. “We also look forward to the project’s creation of job opportunities and economic development. Another huge win for taxpayers is that the Texas Bullet Train is a private venture that receives no public funds,” Turner said.

Keith said the company is looking forward to moving ahead with the city on a project that will help the local economy and provide other job opportunities.

“We are thrilled to partner with the mayor and the city for our shared vision for what this project can be for the Houston region. We are grateful the mayor has endorsed a major milestone in the plan to bring a state-of-the-art Bullet Train system to our great state,” Keith said. “We’re ready to go.”

Houston businessman Drayton McLane Jr., a member of the Texas Central board of directors and former owner of the Houston Astros, said the project is a game-changer – a new transportation choice that’s fast, safe, reliable and productive. “The bullet train is the next great deal for Texas. This demonstrates how the free market can play an integral part in addressing America’s enormous infrastructure opportunities. The agreement continues the project’s momentum and shows the nation — and the rest of the world — how Texas does big things the right way for the public good,” McLane said. 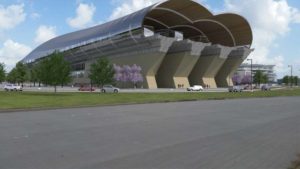 The project is expected to generate $36 billion in direct economic activity over the next 25 years, create more than 10,000 direct jobs per year during construction and up to 1,000 jobs permanently when operational. The agreement says many of these jobs will involve construction within the city, including building the rail line and the Houston passenger station.

Local companies will benefit from construction work, such as building the system and maintenance facilities, supplying materials and providing long-term support for our state’s newest industry.

The agreement says Texas Central is committed to recruiting construction contractors, subcontractors and employees from the Houston-area job market for the construction of the project and its maintenance and operation. At least a third of the permanent jobs after construction will be created within the city, according to the agreement.

Texas Central expects to pay more than $2.5 billion in taxes over the next 25 years, going to counties, cities, schools and other taxing entities along the route.

The agreement says the project will have a “substantial and long-lasting positive impact on the city’s economy, serve as a catalyst for future growth, create jobs and infuse tax revenue into the state and the local communities.”

The agreement says the city and Texas Central will be collaborating in several areas, including:

Texas Central said it hopes to have federal clearance for the line by the end of the year. If approved, construction could start in 2019. The environmental review estimated construction would take about five years.

See article in the Houston Chronicle by Dug Begley.