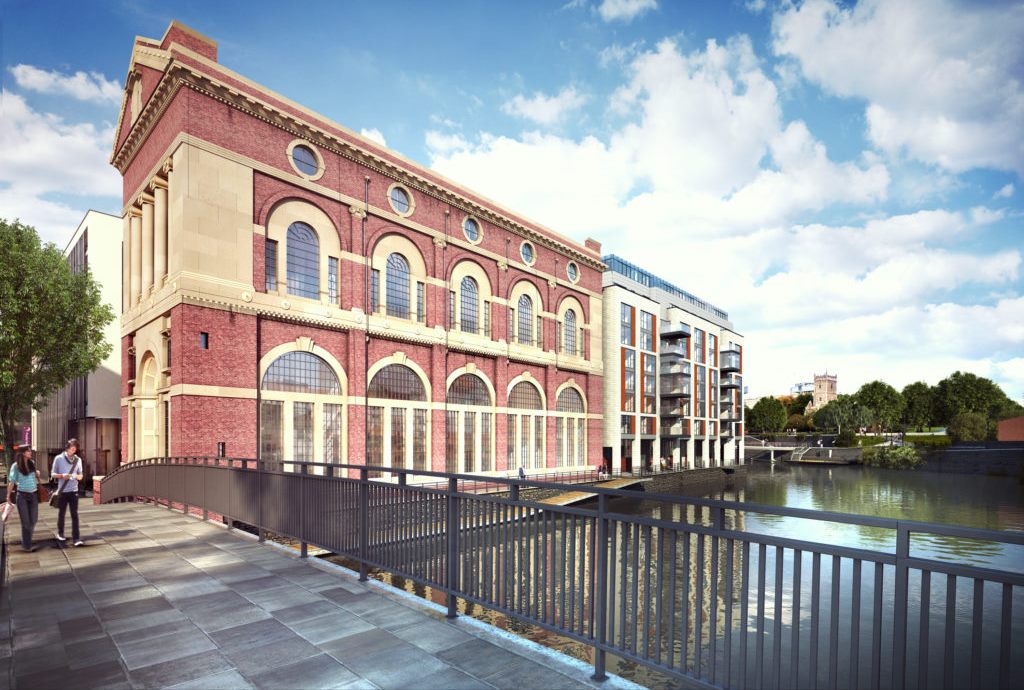 The striking red brick and stone Generator Building—which originally housed the generator for Bristol, England’s tram system—is ready to get a new lease of life as offices for tech, creative or media businesses.

The instantly-recognizable building on Finzels Reach by Bristol’s floating harbor will be extensively renovated, with repairs to the limestone ashlar stonework and dramatic windows, to bring the exterior back to its former glory.

The original 1890s arched front entrance on Counterslip with its grand Venetian window is currently sealed off and will be re-instated with new glass doors at street level. These will open into a double-height foyer space beyond, allowing people to enjoy the original scale of the internal spaces for the first time in 30 years.

The interior of the building will contain five storeys of high quality, Grade A office space, designed to make the most of the views across the harbour as well as meeting current British Council of Offices standards. Interior finishes, including exposed services, will complement the fabric of the building and appeal to businesses in the burgeoning tech, creative and media sectors.

The driving force behind Finzels Reach is local developer Cubex, together with its funding partner Palmer Capital. The £12 million renovation and repurposing of the Generator Building will create 28,300 sq ft of work space, for up to 300 people.

Bristol was the first city in Britain to build an electric tram service and the Generator Building was opened in 1899 to supply power to the massively expanding tramways network. The architect William Curtis Green later became better known for designing buildings such as Scotland Yard and the Dorchester Hotel in Park Lane. The Bristol power station contained four steam engines coupled to four generators and supplied power to the tramway system until 1941, when a bomb hit St Philips Bridge and cut the power cables.

Gavin Bridge, director of developers Cubex says: “We think this striking building is likely to attract companies from the creative, media or tech sectors who are looking for an inspirational environment in the heart of the city. This building has a fascinating history as the place that powered 20th century transport innovation, and it’s good to think it could become home to some of the companies at the forefront of today’s technology revolution.”

The Bristol Civic Society has reviewed the current proposals and strongly supports the development, saying it will “make a major regeneration contribution” to the city.

Local architects, the Bush Consultancy, designed the new office conversion of the Generator Building and have also been responsible for the new design of the apartments in Cask Store, Georges Wharf and Hawkins Lane as well as Castle Bridge at Finzels Reach.

Following a positive planning pre-application, the public consultation was the final step before submitting a full planning application to Bristol City Council in early December. Work could start on the building in summer 2018.