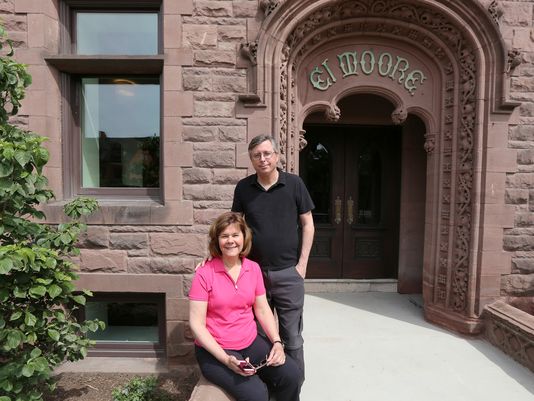 Since its construction in 1898, the El Moore apartments in Detroit’s Midtown district has played many roles: a Gilded Age home for the well-to-do, a Depression-era boarding house, and, lately, a vacant eyesore.

Now it’s been remade in yet another – and perhaps its most hopeful – guise: Detroit’s most environmentally sustainable experiment in urban living.

The El Moore is a sister project to the nearby Green Garage, a showcase for sustainable design that opened in 2011 by founders Tom and Peggy Brennan. The Green Garage began life as a Model T service center but was remade by the Brennans as a showcase for reclaimed wood, energy efficiency, and other environmentally friendly materials and systems.

The Brennans wanted their next project at the El Moore to use no more than 20% of the normal energy of a similar apartment building.

But the Brennans also wanted to develop a community of like-minded residents at the El Moore, people who appreciate both the green features of their home and the opportunity to build a community.

“We believe in a connectedness to the Earth, in some sort of environmental responsibility, but we were also trying to develop that community aspect,” Peggy Brennan says.

The El Moore represents a $3.9-million investment. The Brennans largely financed it privately, but they worked with the Detroit Economic Growth Corporation and the Michigan Economic Development Corporation to use a brownfield tax credit.