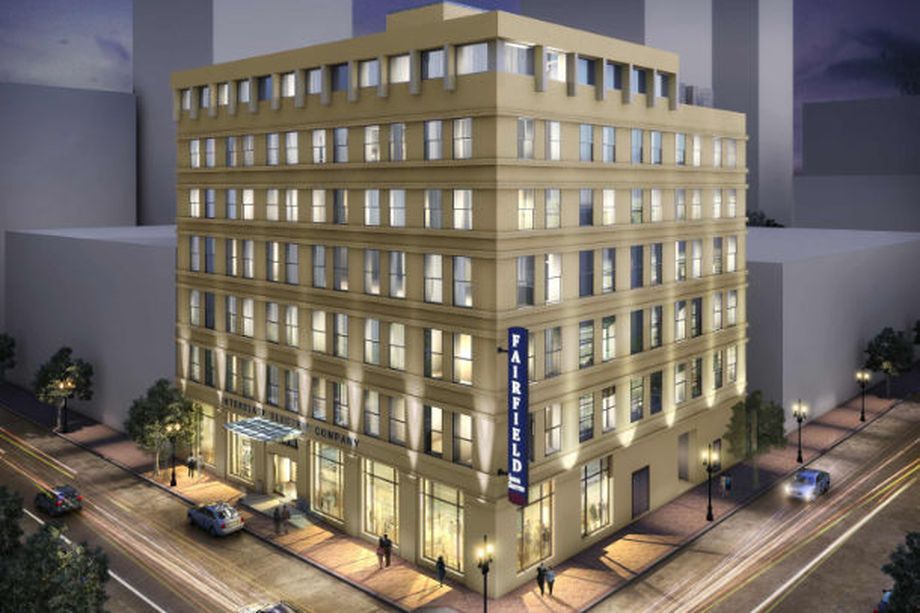 The historic hotel, built in 1910 as the Interstate Electric Company, was acquired by New Castle in April of 2015 and under the direction of New Orleans architect John T. Campo Associates, underwent a $10 million transformation utilizing historic tax credits for the preservation of the building’s façade and interior structures.

“New Castle has a long history of rescuing high-potential historic buildings and transforming them into top-performing, modern hotels that reflect their original character,” said Gerry Chase, president and COO of New Castle Hotels & Resorts. “This Fairfield Inn & Suites, in the center of New Orleans Central Business District, threads the needle of evolving guest expectations by combining the best attributes of this popular Marriott brand, and the destination-specific details and influences that speak to contemporary travelers.”

“New Orleans is a city whose present and future success is founded on a rich and distinguished history, including our musical, architectural, and the less-appreciated industrial heritage,” said Kurt Weigle president and CEO of the New Orleans Downtown Development District. “Congratulations to New Castle Hotels & Resorts for recognizing the important role the Interstate Electric Company building played in advancing all three elements of our history and for the beautiful job they did highlighting them. This new Fairfield Inn & Suites will contribute nicely to writing the next chapter of the New Orleans story.”

Chase cited the 13-foot ceilings in the guest rooms, exposed original brick interior walls and support beams, and the building’s façade as noteworthy examples of the hotel’s historic character. Jazz-themed lobby decor and a full-service bar, 346Blu, pay homage to the city’s vibrant music scene and elevate the hotel beyond the traditional Fairfield prototype.

“Guests will find that the Fairfield Inn & Suites New Orleans Downtown is in a class by itself when compared to most select service hotels,” noted General Manager Patricia Coulter. “Top-of-the-line finishes, guest suites with two king beds, and full-service hotel amenities such as 346Blu will provide an upscale experience for an exceptional price.”

“New Orleans is on a 10-year run of record-breaking tourism growth, with nearly 10 million visitors spending more than $7 billion in 2015,” said Chase. “This city has a tremendous marketing engine and a world-class infrastructure capable of hosting major events like Mardi Gras and the NBA All-Star game simultaneously next year. They also have a need for new, top quality accommodations to host those guests. We look forward to playing a small role in this city’s tremendous economic trajectory.”