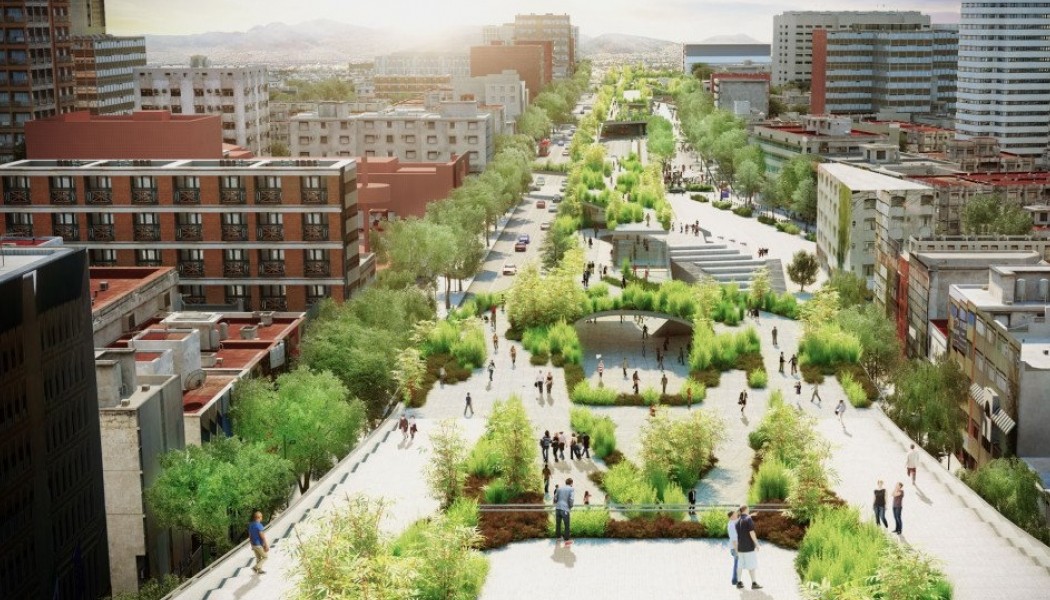 Note from Storm: I’ve spent a lot of time in Mexico City over the past quarter-century, and love it dearly. I’m very familiar with the avenue described in the article below, and am overjoyed to see this project happening.

Mexico City is rapidly emerging as a global leader in green redevelopment and green buildings (as described in this article from the U.S. Green Building Council).

From the article: Mexico City-based firms FR-EE, Frente Arquitectura, and RVDG Arquitectura + Urbanism will redesign a 0.8 mile-long stretch of Avenida Chapultepec, one of the city’s most historic corridors, into a multi-modal public space and park.

Extending the roadway as a part of Chapultepec Park, their proposal for “Cultural Corridor Chapultepec” includes a broadening of the street’s center for pedestrians and recreating, and increased lane spaces for bikes and buses, with a narrowing for cars. There will also be an upper retail level built into the Avenida.

The corridor has played a strong historical role in the city, serving as the thruway that divided the cities of San Juan and San Pablo in the 16th century, and connected the city of Calzada San Juan to the resting place of the Aztec emperors.

While some will say Mexico City is creating a variation on the High Line, the elevated railway park in Manhattan, Fernando Romero–the lead designer with FR-EE–thinks a closer analogue is Seoul’s work to transform its buried ChonGae Canal, once a busy transportation channel, into a linear public park. Seoul, another mega-city, has created vibrant public spaces with multiple levels along its revitalized waterway.

A prime example is Mikyoung Kim’s ChonGae Canal Point Source Park, which leads visitors down to the canal’s edge. Romero says: “Seoul has undertaken many projects with the idea of creating public space, while respecting the existing, often-difficult-to-manipulate infrastructure.” ^^^^^^^^^^^^^^^^UPDATE^^^^^^^^^^^^^^^^^^^^^ But at the end of 2015, two-thirds of those who voted in a local referendum gave the Chapultepec Cultural Corridor a thumbs-down.

It didn’t have to do with the plans themselves, but about the lack of transparency and public participation behind them.

See additional article on this project.