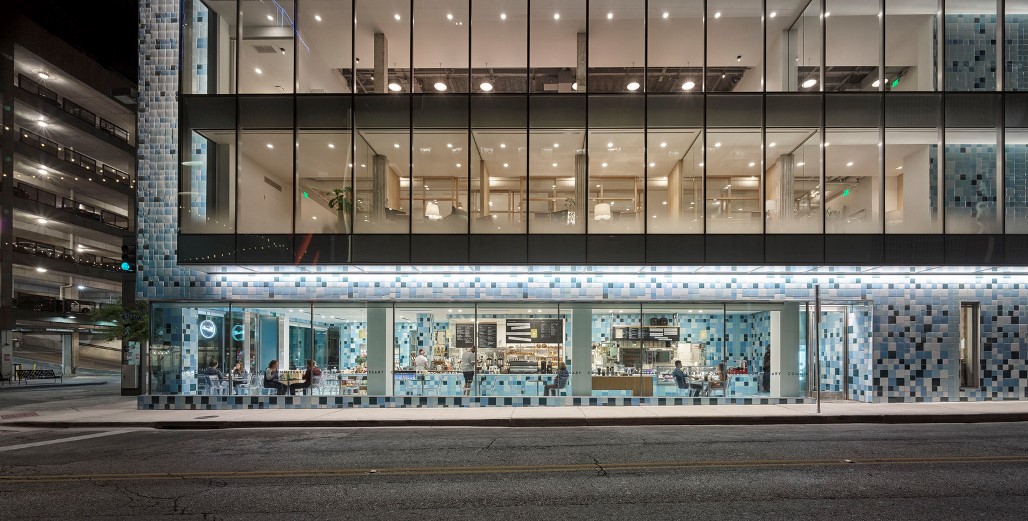 In downtown Dallas, Texas, a substantially-modified 1217 Main Street building reopened, with the most striking change to the 1950s-era bank building being the exterior. 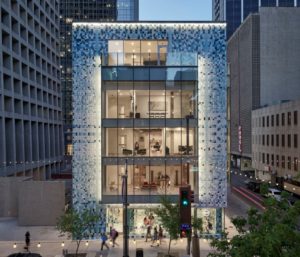 Cuban-born artist Jorge Pardo, a Macarthur Foundation Fellow whose body of work explores the intersection of contemporary painting, design, sculpture, and architecture, was commissioned to design a mosaic façade handmade from 36,215 glazed ceramic tiles. Jorge Pardo is known for blurring the lines between art and architecture.

The building was originally built in 1958 as the Guardian Savings Bank. Having gone through two fires over the last 20 years, among other misfortunes, 1217 Main has become a true revival story, transforming from a liability into an urban asset for both the city and neighborhood.

The renovated building has been cited as one of ten best structures in Dallas within the last decade by Mark Lamster, the acclaimed architectural critic for The Dallas Morning News.

Here’s what the architects at 5G Studio Collaborative say about their project: 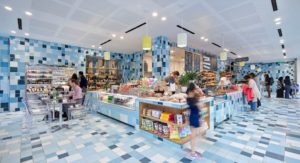 The client and Jorge Pardo challenged the team to design, engineer, and construct a ceramic tile facade with no visible control or expansion joints, panel or module seams.

The artistic intent required the building to read as a single mass of tile by applying the handmade ceramic in a rigorous pattern on interior and exterior planes.

Known for his seductive use of color, Pardo conceived of a tile facade that derived its inspiration from the subtle variation of the Texas blue sky, conceptually bringing a piece of the sky down onto the urban landscape that’s dominated by grays and beige. 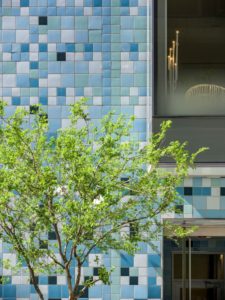 The gradient facades were composed of 6 colors, and every tile on the building was placed to coordinate with architectural features. Over 11 months, the installers individually set the 36,215 tiles.

The tile façade is a custom rainscreen system that is a gridwork of vertical and horizontal T-shaped aluminum extrusions onto which the tiles are individually set with structural silicone. There are no control joint or expansion joints on the façade. The expansion and contraction are handled within the ¼” silicone tile joint.

Jorge Pardo typically works with ceramic tile suitable for the arid climate of Mexico, but in Dallas, Texas there are freeze/thaw cycles which may cause spalling of the tile. The initial ceramic tile was tested and had a 9% absorption rate. 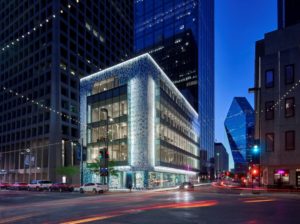 After these findings, the design team specified a custom tile to be fabricated with attributes similar to a porcelain tile. This custom tile that is used on the building has a 0.2% absorption rate.

The ground floor of the building is occupied by a bakery/café/butcher shop/commissary operation with 4 levels of creative office floors above. The roof of the previously 4-story building was also converted into an occupiable office floor with exterior balconies affording the outdoor enjoyment of the Dallas downtown scene.

The successful merging of the urban art and architecture transfigured a downtown building that had been a liability for over 20 years into a new downtown anchor that is now full of life day and night, commanding an influence that extends multiple urban blocks beyond its location on Main Street Dallas.

All photos courtesy of Adam Mørk.