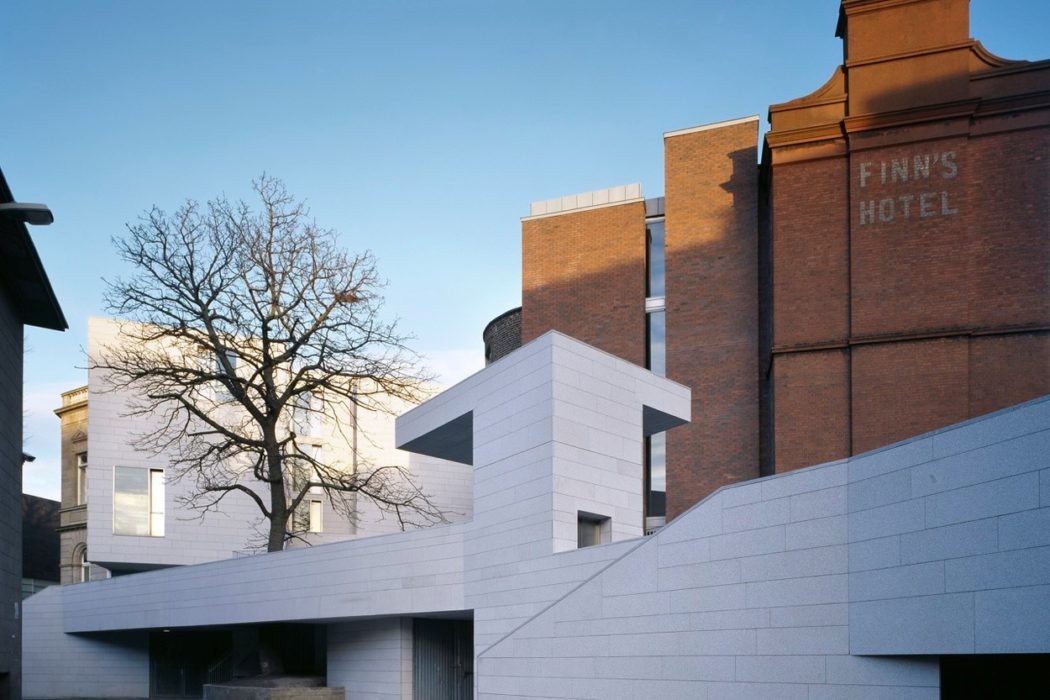 Trinity College is the sole constituent college of the University of Dublin, a research university in Ireland. The college was founded in 1592 as the “mother” of a new university, modeled after the collegiate universities of Oxford and of Cambridge.

Unlike those, only one college was ever established, so the designations “Trinity College” and “University of Dublin” are usually synonymous for practical purposes. It is one of the seven ancient universities of Britain and Ireland, as well as Ireland’s oldest university. 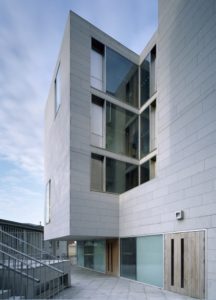 Now the 19th-century Parsons Building houses the Department of Mechanical & Manufacturing Engineering of Trinity College has experienced another stage in its long process of growth, adaptation, and renewal. Readers of Stewart Brand‘s classic “How Buildings Learn” will appreciate this story.

The building has just been expanded for the second time, the first being in 1996, by the same local design firm: Grafton Architects. which addresses the campus and is attached to the existing Parsons building which houses the Department of Mechanical & Manufacturing Engineering.

The site for this extension was wedged between an urban block and the Parsons Building. It is also the primary route for services to make their way from the city to the campus – gas, electricity, IT, water etc. An existing electricity substation and transformer pits located on this site had to be maintained and so we were tip toeing around to find a place for the additional accommodation required.

The site is at the junction of the brick urban block with the stone university buildings, both in terms of geometry and language. The brick gable of the Lincoln Place buildings, with the painted sign of Finns Hotel could not be interfered with because this sign signifies the hotel where, as every Dubliner knows, Nora Barnacle worked when she met James Joyce on Nassau Street. Also there was one important tree to be preserved.

The brief was to make sense of this confluence of disparate geometries and buildings and, in the process, to find a way of providing additional research and teaching spaces. There was also the requirement thatthe building had to be designed in such a way that it could be phased as funding became available. 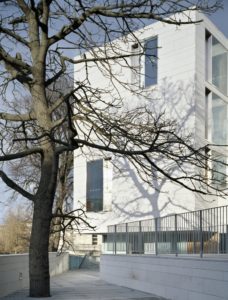 The building extends the existing Department, forms a space between this Department and the rear of the repaired urban block and upgrades the existing pedestrian gateway to Nassau St. An external lift is housed in a new ‘gatehouse’ element. This provides disabled access from the raised level of Nassau Street to the campus below. A podium houses extended basement levels used for research laboratories. This podium forms ‘forecourt’ and ‘courtyard’ type spaces forward of and between buildings.

The preserved tree is anchored in this podium space and engenders a sense of communal life.

The upper level accommodation consists of smaller teaching spaces. A gap of 600mm is left between old and new. New is kept separate from old, but connected with half levels, quarter levels, multiple lift stops, multiple stair landings, allowing easy movement between new and old spaces.

The podium level stretches, bends and folds to deal with the complex conditions of the site. It connects street with campus, forms new entrances and exits from existing departments, and forms a sunny communal space under the canopy of the preserved tree.

The small teaching block to the west cantilevers over the podium to form a new entrance to the Department. The granite wall is punctured by timber windows clad externally in stainless steel, finished flush with the granite. The granite cladding coursing is matched with the existing stone coursing of Parsons building and the stone is interlocked at the corners revealing a cladding condition as opposed to a solid form of construction. Two ‘mute’ brick elements, like chimneys, are attached to the Lincoln Place gable housings a new lift and toilets.

The exterior, in its form and language, is thus designed to connect and integrate city and campus.

All photos by Ros Kavanagh via Grafton Architects