The tower at Pigeon Point Light Station State Historic Park in Pescadero, California, has been closed to the public for almost 20 years.

Standing tall since 1872, the 115-foot Pigeon Point Lighthouse is tied for the tallest lighthouse tower on the west coast. 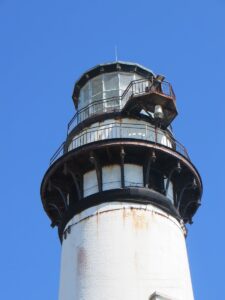 In late 2001, several large pieces of the upper iron belt course broke away.

Additional rust damage to the ironwork has occurred over the intervening years.

Moisture intrusion has compromised a significant portion of the interior masonry.

On July 16, 2021, the California Department of Parks and Recreation announced that the State Parks System had identified over $18 million for the complete restoration of Pigeon Point’s tower.

These funds are a portion of the $185 million for deferred maintenance throughout the State Parks System included in the Governor’s 2021 budget for California.

The entire project is expected to go out for bids this fall with construction anticipated to begin in early 2022.

Over time, the upper one-third of the tower has suffered the majority of the damage.

This will be the most complex to restore, including the lantern room and roof, the outer two galleries, and interior masonry. 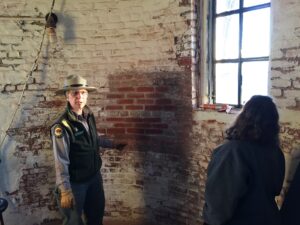 The first-order Fresnel was removed for safety in 2011 and is on display in the fog signal building. The remaining lantern mechanism will be removed from the tower for refurbishment.

Restoration will include the body of the tower and the wrought-iron staircase that leads to the top.

The lower iron belt courses will be refurbished or replaced.

For public safety, the lighthouse at Pigeon Point Light Station State Historic Park will continue to remain closed until the structure can be restored, but it may still be viewed from the grounds daily.