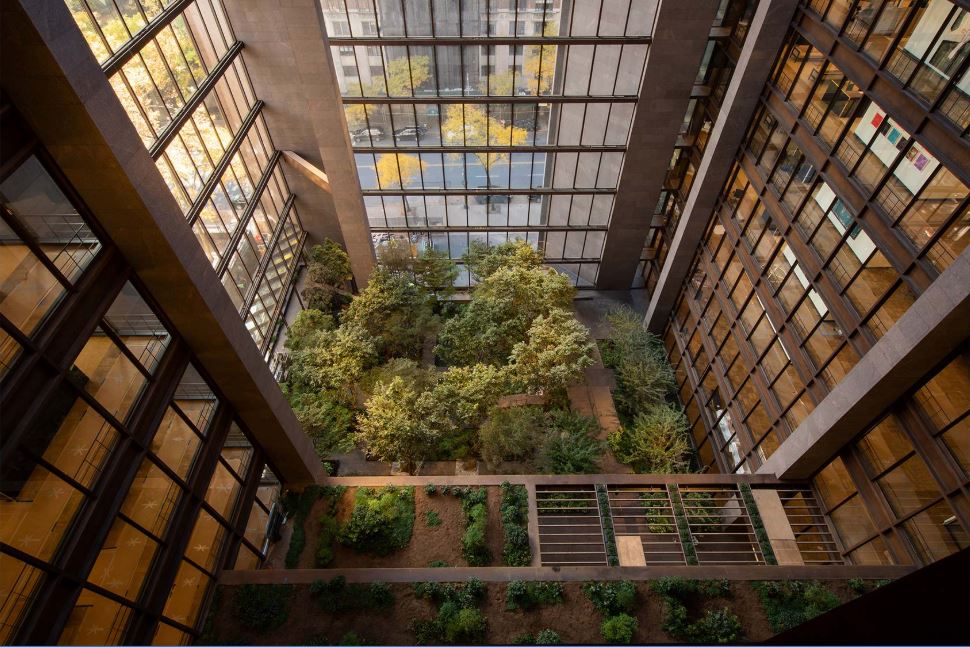 On December 4, 2018 in New York City, the giant design-build firm, Gensler—in partnership with the Ford Foundation—announce the reopening of the foundation’s landmark headquarters, and its transformation into the Ford Foundation Center for Social Justice.

This major restoration and renewal maintains and enhances the building’s original character while also significantly introducing an increase in transparency and accessibility throughout the space. 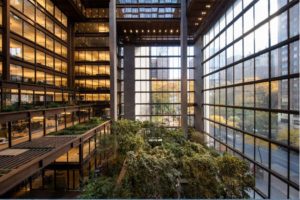 Gensler undertook this redesign with an emphasis on architectural stewardship and an eye to the foundation’s mission for the 21st century — to promote the inherent dignity of all people. For the renewal the design team sought to make meaningful program changes while maintaining both the design intent as well as the patina of the original project architecture.

“Over the past four years, we’ve worked closely with Ford Foundation’s team to completely rethink approaching a renovation project on this scale,” said Robin Klehr Avia, Gensler Project Principal. “We knew that any changes we made to the building would need to both support and enhance the foundation’s values. The project leverages Gensler’s technical expertise in sustainable architecture for collaborative workplace interiors, as well as branding and graphic design, to express the Ford Foundation’s story — past, present, and future.” 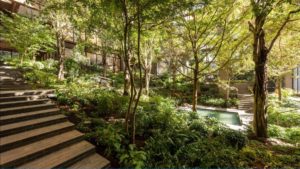 Completed in 1968 by Kevin Roche John Dinkeloo and Associates, the foundation’s global headquarters—at 51, one of New York City’s youngest architectural landmarks—was a deliberate and nuanced response to the organization’s founding mission: to support education and charitable purposes for the advancement of human welfare.

Highlights of the redesign include:

Conveying the Voice of the Foundation:

Gensler has implemented a full signage program, directory, and wayfinding strategy to reflect the building’s clean architecture and welcome a diverse new community to the building. The brand design highlights the foundation’s program, which includes an extensive art collection; ensures that the mission of the foundation is fully communicated; and that new levels of inclusivity, diversity, and stewardship are integrated throughout the space.

Key elements of the brand design include:

The Ford Foundation’s Mission is on Display in a New Art Gallery and Program:

The Ford Foundation’s world-class art collection and commitment to contemporary art was also a central focus of Gensler’s renovation. By removing a portion of the building’s second floor concrete slab, Gensler created a new double-height art gallery that will host an exhibition program grounded in the foundation’s mission. Featuring 20-foot ceilings and state-of-the art lighting, the gallery will be capable of museum-quality presentations led by an in-house curator.

The brand program will also incorporate site-specific installations and murals that will be visible to the community through the atrium and common areas.

The Ford Foundation is an independent, nonprofit grant-making organization. For more than 80 years it has worked with courageous people on the frontlines of social change worldwide, guided by its mission to strengthen democratic values, reduce poverty and injustice, promote international cooperation, and advance human achievement. With headquarters in New York, the foundation has offices in Latin America, Africa, the Middle East, and Asia.

There will, of course, be those who wonder if the money spent on this renovation and art show might not have achieved more social justice if spent in other ways. But this is New York City, so it’s possible that the Ford Foundation was going for a more ironic, aristocratic approach. If so, well done!

All images courtesy of Gensler.