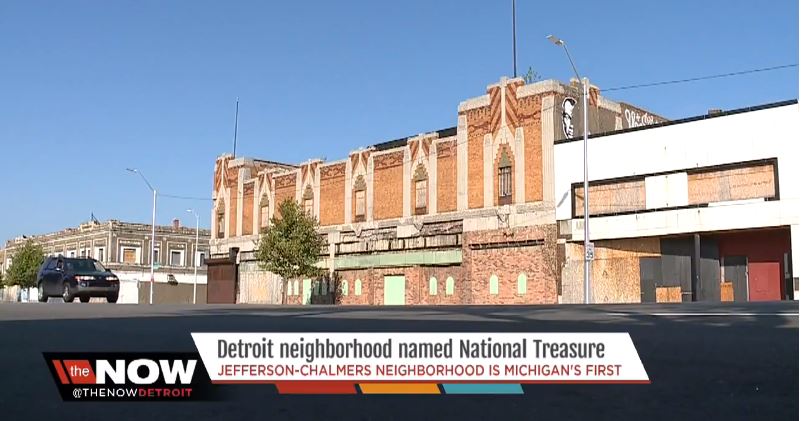 We all know Detroit is rich in history. Now, a national organization is giving recognition to one of the city’s neighborhoods.

The Jefferson-Chalmers district is now considered a National Treasure.

But, many of the buildings and homes are vacant and in need of revitalization. That’s where the National Trust for Historic Preservation comes in.

The organization named the district a National Treasure, which is a first for Michigan.

Now, with the new designation by the National Trust, both businesses and residents will benefit.

“This is important,” said Josh Elling of Jefferson East Inc.. “Historic designation will bring more attention to the neighborhood as well as resources from the national trust to help both residents and building owners on Jefferson to revitalize our historic structures.”

Jefferson East, Inc. is a partnership organization and collaborative catalyst for economic development among the five districts that comprise the east Jefferson corridor: Lafayette Park, Rivertown, the Villages, the Marina District, and Historic Jefferson-Chalmers.

Formed in 2013 by the affiliation of the East Jefferson Corridor Collaborative and the Jefferson East Business Association, JEI exists to increase the viability of business districts and density of residential neighborhoods while creating an inviting sense of place.

They do this through innovative programming and community events, and by creating and maintaining a clean, safe and green environment along East Jefferson Avenue in true collaboration with partner organizations, and through the collective voice of the constituent districts.