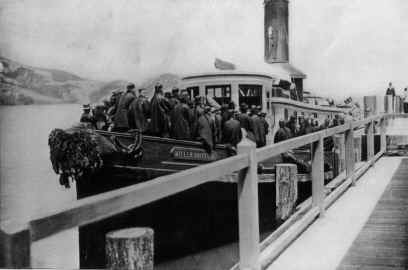 It will be transformed into the Pacific Coast Immigration Center, with interpretive exhibits to tell the stories of the immigrants detained on the island.

More than 1 million immigrants from China, Japan, South Korea, Russia, Mexico, the Philippines and other countries passed through Angel Island between 1910 and 1940.

Angel Island State Park, the largest natural island in the San Francisco Bay, offers some of the best views of the surrounding Bay Area. With great hiking trails and many other recreational opportunities readily available, Angel Island is truly a hidden gem in the midst of the urban Bay Area.

Angel Island is truly a walk through time. Beginning with the earliest inhabitants, the Coast Miwok, Angel Island was a seasonal hunting and gathering location for the local native tribes, a safe refuge and supply stop for Spanish explorers like Juan Manuel de Ayala, one of the first to map the San Francisco Bay.

From 1910 to 1940, the U.S. Immigration Station processed hundreds of thousands of immigrants, the majority from China. During World War II, Japanese, and German POWs were detained at the Station before being sent to facilities farther inland.

The Island has been a cattle ranch and beginning with the Civil War at Camp Reynolds, the Island has over 100 years of military history. With the outbreaks of WWI and WWII thousands of troops both returning and embarking for conflicts around the world were processed through Angel Island. In the ’50s and ’60s, the Island saw its last military service as a home to a Nike missile base.

In 1954 the transition of Angel Island as a California State Park began. Starting with Ayala Cove on the western side of the Island, park visitors had the first opportunities to enjoy the beauty of this amazing Island. In the early 60’s the final departure of the military allowed the rest of Angel Island to become park lands and the rest is history.