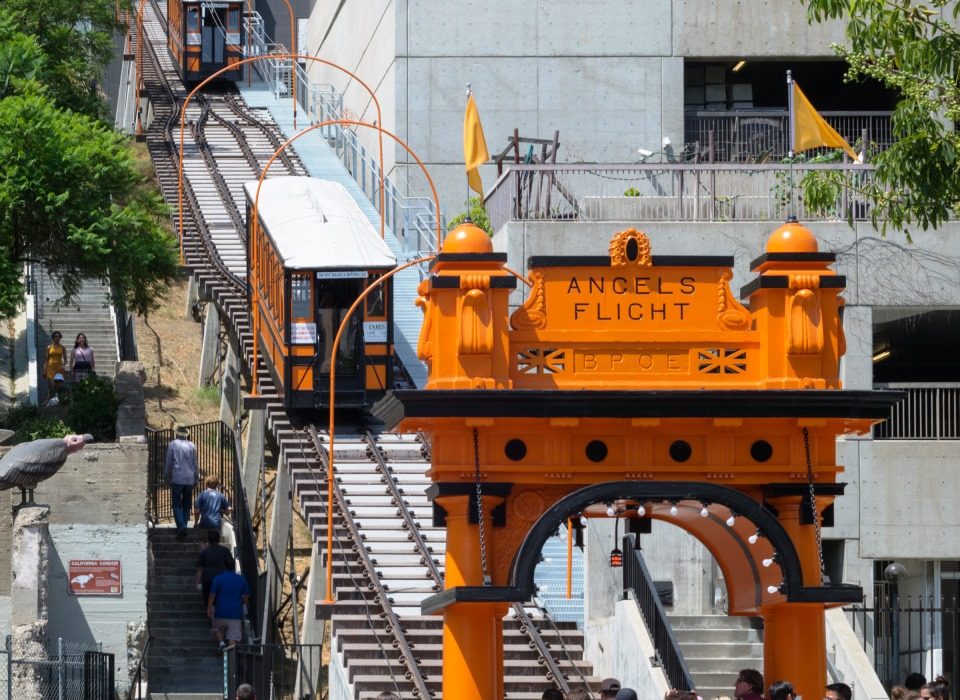 Angel’s Flight is a landmark 30-inch (762 mm) narrow gauge funicular railway in the Bunker Hill district of downtown Los Angeles, California. For a railway with no stations between the beginning and the end, it sure has had a lot of stops and starts.

The funicular has operated on two different sites, using the same cars and station elements. The original Angels Flight location, with tracks connecting Hill Street and Olive Street, operated from 1901 until it was closed in 1969, when its site was cleared for redevelopment. 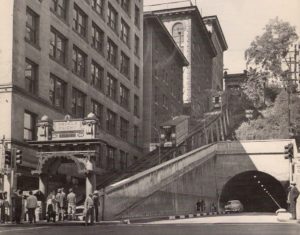 The second Angels Flight location opened one half block south of the original location in 1996, with tracks connecting Hill Street and California Plaza. It was shut down in 2001, following a fatal accident, and took nine years to commence operations again. The railroad restarted operations on March 15, 2010. It was closed again from June 10, 2011, to July 5, 2011, and then again after a minor derailment incident on September 5, 2013.

The investigation of this 2013 incident led to the discovery of potentially serious safety problems in both the design and the operation of the funicular. Before the 2013 service suspension, the cost of a one-way ride was 50 cents (25 cents for Metro pass holders). Angels Flight service has been suspended since that time.

In March 2017 an announcement was made that the line would be reopened later in the year after safety enhancements are completed; Angel’s Flight reopened for public service on August 31, 2017. It has two funicular cars, named Sinai and Olivet, running in opposite directions on a shared cable on the 298-foot (91m) inclined railway.

Although it was marketed primarily as a tourist novelty, it was frequently used by local workers to travel between the Downtown Historic Core and Bunker Hill. In 2015, the executive director of the nearby REDCAT arts centre described the railroad as an important “economic link”, and there was pressure for the city to fund and re-open the railroad.

To quell any worries this time around, the railway boasts $5 million of new safety features including repairs to the tracks, cars and motors and the installation of an emergency stairway. (That didn’t stop it from being shut down briefly for repairs shortly after reopening.)