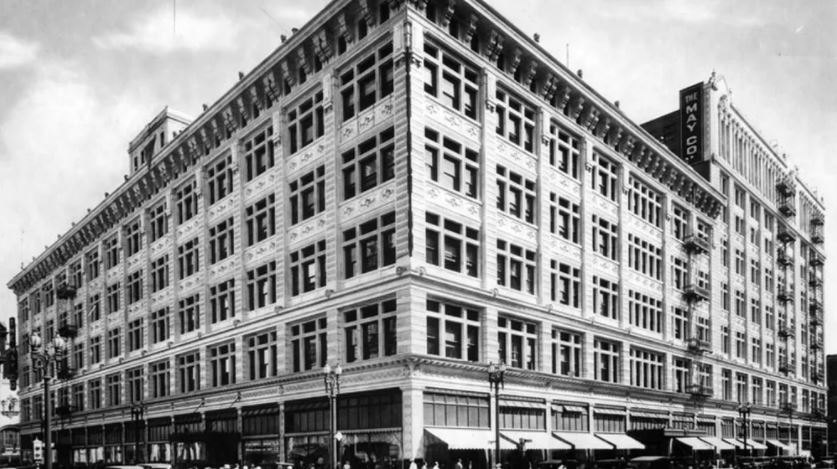 Downtown Los Angeles, California architecture and interior design firm Omgivning is working on some of the most high-profile adaptive reuse projects in the neighborhood right now. 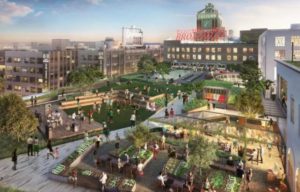 Their projects include the revamp of the Broadway Trade Center (pictured above) into a food hall/private/club/hotel/rooftop park, and the conversion of the 1926 Case Hotel building into a posh boutique Proper hotel.

When it opened in 1908, the huge Hamburger & Sons department store made Downtown Los Angeles’s South Broadway into a destination.

Thanks to the area’s rapid redevelopment, the building–indeed, the entire block–is making a dramatic comeback.

Just over a century ago, Hulett C. Merritt built an imposing white edifice on Broadway in downtown Los Angeles meant to reflect his stature as one of California’s richest, most successful businessmen.

It was a nine-story office tower designed to evoke the ancient Roman temple of Minerva, clad in exquisite white marble from the same Colorado quarry that supplied stone for the Lincoln Memorial being erected at the time in Washington.

Today, the long-vacant Merritt Building is covered in dark soot and graffiti, a lingering eyesore in a neighborhood on the mend. Its new owners, however, have begun a full-scale makeover to restore it to life as an upscale office building — an unusual but increasingly common decision among landlords in downtown’s Historic Core.

In a trend that would have been unimaginable only a few years ago, historic office buildings are now being returned to the office market instead of converted to apartments, condominiums or hotels, which has been common for the last decade and a half.

The pattern reflects tenants’ changing tastes in office space and the comeback of downtown. It also reveals a silver lining to what has been widely regarded as one of the worst planning decisions in the city’s history — the wholesale removal of the aging Bunker Hill residential neighborhood in the 1950s and 1960s to make way for what was then called “urban renewal.”

Victorian homes that had once been among the city’s finest addresses were wiped away. By the 1980s and ’90s, gleaming office skyscrapers including the 73-story U.S. Bank Tower populated Bunker Hill and white-collar businesses’ abandonment of L.A.’s original downtown on Spring Street, Main Street and Broadway was complete.

Now many business owners and their employees find old buildings (those few that survived the wrecking ball of misguided urban planners) charming and better reflections of their company identities than the more impersonal mirrored-glass high-rises built to impress the elites of 20th century corporate America.

The larger trend towards repurposing old buildings in Los Angeles can be traced back to 1999, when the Adaptive Reuse Ordinance was passed. It became one of the most significant incentives related to historic preservation in Los Angeles, facilitating the conversion of dozens of historic and under-utilized structures into new housing units.

The Ordinance was originally approved in 1999 for downtown Los Angeles and was extended into other neighborhoods of the city in 2003. It provides for an expedited approval process and ensures that older and historic buildings are not subjected to the same zoning and code requirements that apply to new construction.

The result has been the creation of several thousand new housing units, with thousands more in the development pipeline, demonstrating that historic preservation can serve as a powerful engine for economic revitalization and the creation of new housing supply.

See article by Roger Vincent in the LA Times.