Here in Arlington, Virginia, where REVITALIZATION is based, the dramatic redevelopment of a dying, historic downtown mall (Ballston Common Mall) is just about to celebrate its completion.

It’s called Ballston Quarter, and it’s being created by Forest City, the Cleveland-based REIT that specializes in large-scale urban redevelopment. 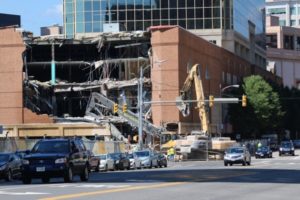 Demolition of an exterior portion of Ballston Common Mall in August of 2016.Photo courtesy of Arlington Now.

For those of you not familiar with Arlington, I should point out that it actually has many “downtowns.” That’s because it’s a county, not a city, and has many centers of activity resembling downtowns: Rosslyn, Crystal City, Pentagon City (yes, folks: the Pentagon is in Arlington, not Washington, DC), Shirlington, Clarendon, Courthouse, and Ballston.

All of them except Shirlington are connected by the Metro systems, and many pretty much owe their existence to a metro stop. Decades ago, Arlington made the wise decision to concentrate new residential and commercial development around metro stations.

That enabled the county to grow economically without destroying its many charming old neighborhoods. This was, in fact, the birthplace of the transit-oriented development ((TOD) trend in the U.S. 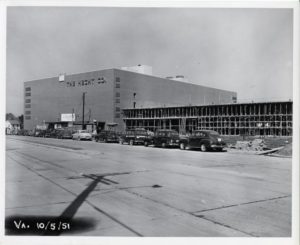 While it may be hard today to imagine old Ballston Common Mall at the intersection of Arlington’s Glebe Road and Wilson Blvd. as an exciting and advanced piece of architectural planning, it truly was at its opening in 1951. It wasn’t Ballston Common Mall  at that point: just an innovative shopping center, wittily called Parkington (due to its integrated parking garage).

That’s why I called it “historic” in the first paragraph: not a word normally associated with shopping malls. It was later redeveloped and reopened as Balston Common Mall in 1987.

This sort of retail design was an absolute novelty, and an early hallmark of both the post-War evolution of the American suburb, as well as the DC area’s growing population.

Though taken for granted now (or looked upon as passé), centralized indoor shopping was still in its trial phase in the early 1950s. 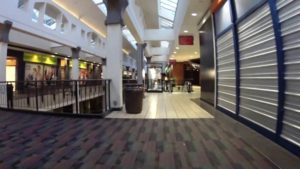 In recent years, Ballston Common Mall has been a sad, mostly-abandoned place.

When Forest City and Arlington County completed agreement to transform Ballston Common Mall, Forest City Washington President Deborah Ratner Salzberg said “We’re pleased to take this important step forward with the County as we renew and transform Ballston Quarter into a vibrant and vital new asset for the community. Forest City has a long history of successful public-private partnerships, and this project is a great example of our long-term investment in communities. Ballston Common Mall was the first project I worked on at the company, and now Ballston Quarter will be the newest example of our urban, mixed-use place-making strategy.”

Located four miles from downtown Washington, D.C., the Ballston Quarter project will open up the existing enclosed mall, creating a more dynamic setting for new retail, dining and entertainment options while creating a seamless transition from interior to exterior spaces.

“As anyone who has driven by Ballston Mall recently can see, its transformation into Ballston Quarter —an exciting regional shopping, dining and entertainment center in the heart of Ballston — is already underway,” said Arlington County Board Chair Libby Garvey.

Back in November of 2015, the County Board unanimously approved plans to redevelop the Ballston Mall into Ballston Quarter and approved a Letter of Intent with Forest City to fund up to $55.5 million in public infrastructure costs related to the project. In July 2016, the Board established the Community Development Authority that allows for the issuance of revenue bonds related to the Ballston Quarter public-private partnership.

Ballston Common Mall opened in 1987 and underwent an expansion in 1999. Ballston Quarter is scheduled to open in Fall of 2018 along with the new pedestrian bridge. The residential building is scheduled to begin preleasing in late 2018.