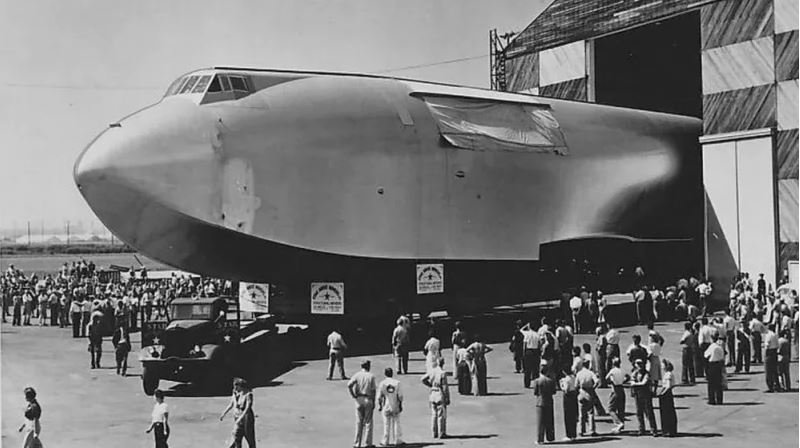 In 1943, Howard Hughes built a huge hangar to house the construction of his Hercules IV (aka the “Spruce Goose”: what was then the world’s largest airplane.

The Spruce Goose was a flying boat, designed to carry some 750 troops, or two M4 Sherman tanks. The war ended before it could be put into service, but Hughes’ near-manic persistence completed the project. T

his resulted in its one-and-only flight, which was primarily to prove to naysayers that the gargantuan construction could actually fly. Due to wartime restrictions on aluminum usage, the plane was built with wood; thus its nickname (which Hughes despised.) 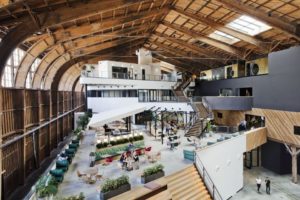 Designed as a building-within-a-building, the project was built inside the seven-story, 750-foot-long historic wooden structure. The 450,000 SF, four-level design is sited between two existing Google properties, and the project aimed to unify the Playa Vista campus while bringing a new perspective to workplace through adaptive reuse. 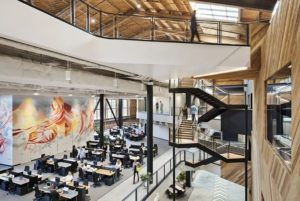 The project included extensive restoration of the original wood frame, and the new architecture is set within the vast, open volumes of the hangar on either side of its fully restored central spine. this central axis divides the building length-ways and originally housed aviation engineers’ offices.

Open floor plates are pulled away from both the interior envelope and the central spine. The varied shaping of each floor allows daylight to penetrate every level and maintains clear sight lines spanning the full length of the building, putting the magnitude and workmanship of the historic structure on display.

The new floor plates hold workspaces and engage strategically with the central spine, which houses collaboration and café spaces. 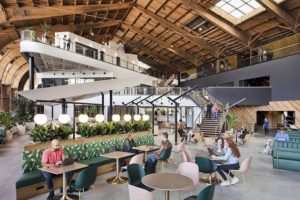 Circulation routes are intended to increase interaction, with a boardwalk that wraps the perimeter of each floor plate and ramps upwards from the ground floor, while bridges pass through the central spine and weave the length of each level.

The materials used in the new interior architecture are subdued. Color and texture are introduced via the hand-selected—and often custom-made—furnishings, complimenting the vibrant and diverse art installations.

In tribute to the hangar’s storied aviation history, the phone, meeting, and conference rooms have airborne-inspired names and aesthetic themes, from Kite to Zephyr. Hospitality spaces are each designed with a contemporary twist on the iconic style of a bygone era.