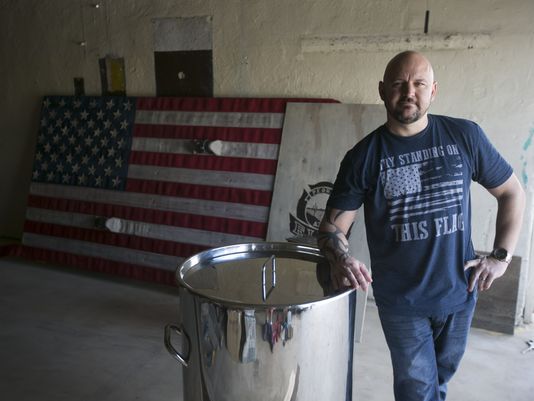 The craft beer boom is well known, but another alcohol industry is gaining momentum.

From watermelon moonshine to artisan whiskey, craft distilleries are a growing trend across the country. In 2005, there were 50 distilleries in operation in the U.S. Today there are more than 500, with thousands more applying for a license, according to the trade group American Craft Spirits Association.

The phenomenon is just beginning to take off in Arizona, where there are seven distilleries.

The eighth will be located in historic downtown Peoria, and city officials see it as an opportunity to transform the area into an entertainment destination.

Lucidi Distilling Company is housed in the former Fire Station No. 1.

Surrounded by vacant lots and abandoned buildings, the distillery is intended to be the first major development in the city’s Old Town revitalization plan.

“You need to have a reason for people to travel to Old Town,” said Chris Jacques, Peoria planning director. “There are people out there that drive to look for microbreweries or distilleries where they have a tasting room. It starts to add that component of vitality to the Old Town area.”

From the Lucidi website: Lucidi Distilling Company is located in the Old Town Peoria Entertainment District and is housed at the Historic Fire Station No. 1. Originally constructed in 1920 as Peoria’s first movie theater, the building later became our first fire station in 1954. Operating as a fire station until 2006, this historic building has housed many of our city’s vital first responders over the years. That character and attitude is still found within the original brick and concrete walls. In an effort to show our appreciation, and more importantly to honor our past, the name on the building remains: “FIRE STATION NO. 1”.

Lucidi Distilling Co. makes daily mash runs using state of the art equipment, along with its hybrid pot still. At 330 gallons capacity, running one shift per day, we can easily make up to 120,000 bottles of spirits per year. We are crafting (and in some cases importing) 22 batch flavors of vodka and moonshine, along with gins, whiskeys, bourbons, agave spirits, rums, bitters, and other miscellaneous specialty spirits.

Note from Storm: Thanks to Peoria, Arizona Mayor Cathy Carlat for submitting this story to REVITALIZATION.