On August 6, 2018, it was announced that work is beginning on a $10.7 million project to transform Route 787 in historic Cohoes, New York.

The badly-planned road has long been dangerous and divisive; both fragmenting and devitalizing the town. Now, it will be redesigned and greened into a revitalizing boulevard that forms a welcoming, pedestrian-friendly gateway to the “Spindle City.”

The project will restore the connection between the east and west sides of Cohoes with a roadway that features better-designed crosswalks and a landscaped median. Construction is scheduled to be completed by the end of next year.

Albany County Executive Daniel P. McCoy said, “The traffic-calming measures that will begin this month, from enhanced crosswalks to tree-lined medians, are critical to ensuring pedestrian, cyclist and driver safety in our community and I thank the Governor for making it a priority. This investment in our infrastructure that better connects our municipalities is also key to economic development and will pay dividends down the road.”

“This transformative project on Cohoes Boulevard combines smart urban planning with significant safety enhancements that will make Cohoes better for residents and visitors,” New York Governor Andrew Cuomo said. “Making it easier to cross between the east and wide sides will open up new business opportunities and reconnect neighborhoods, spurring regional growth and economic development for years to come.” 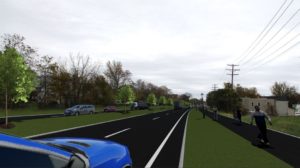 Last year, Governor Cuomo announced the conversion project, which will address Route 787 through the city limits, from just south of Dyke Avenue to just south of the approach to the Cohoes Waterford Bridge. This area of Route 787 is known locally as Cohoes Boulevard.

Senator Neil D. Breslin said, “I am pleased to have supported this project and excited that construction is beginning. This will make the roadway safer for pedestrians, cyclists, and motorists alike and will be an exquisite entrance into the historical (sic) City of Cohoes.”

The redesign of Route 787 adds raised pavement to its three intersections in the city; at Dyke Avenue, Bridge Avenue and Ontario Street. A first for the Capital Region, the “terraced” intersections will increase visibility for pedestrians and motorists, and will slow motor vehicle speeds with a gentle-but-noticeable, four-inch rise and descent on the road surface. Both the approaches to the intersections and the crosswalks will be brick red. The color contrast and raised elevations will help alert drivers to pedestrians. Narrower shoulders, new curbs, “your speed” radar signs, and a slight horizontal shift for traffic heading northbound toward Dyke Avenue also will encourage motorists to drive more slowly.

Once the traffic-calming project is completed, the speed limit is expected to be reduced from the current 40 miles per hour. The project will also include two pull-off areas in each direction for police vehicles to park for traffic safety enforcement.

The project will also add a tree-lined grassy median and a multi-use path, contributing to the gateway feel. The 10-foot wide multi-use path along the east side of the road will connect with new, dedicated bicycle lanes on Dyke Avenue as part of the Empire State Trail and its connection to the Mohawk-Hudson Bikeway.

Furthermore, the pedestrian enhancements at the road’s three intersections will help bolster the connection for all those who cross the boulevard for work, school, shopping and more between Cohoes’ Van Schaick Island and Simmons Island neighborhoods on the east and the downtown, Cohoes Hill and the Harmony Mills neighborhoods on the west.

For pedestrians, six-foot wide refuge islands at the median with pedestrian signals and push-buttons will be added at each of the three intersections and the distance across each intersection will be reduced.

New lighting will also be added to the Dyke Avenue intersection; lighting already exists at the other two intersections. The project will also add a new sidewalk connection to the Waterside Senior Apartments on Dyke Avenue. 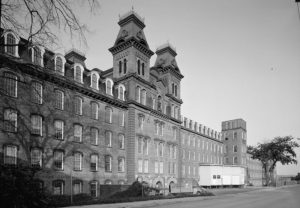 Cohoes is called the “Spindle City” due to the textile manufacturing that drove its growth in the 19th century.

The city’s factories processed cotton from the Deep South, produced on plantations in the slave states. As of the 2010 census, the city population was 16,168.

The name Cohoes is believed derived from a Mohawk term, Ga-ha-oose, referring to the Cohoes Falls and meaning “Place of the Falling Canoe.” Other historians posit that it derives from the Algonquian Cohos, a place name based on a word meaning “pine tree.”

Assemblymember John T. McDonald III said, “The anticipated completion of the Cohoes Boulevard project is exciting news for the Cohoes community. Having served as the former Mayor of Cohoes to my current position as the Assemblymember for the city, I have seen this process from start to finish and truly appreciate the partnership between state and local officials that has led to the completion of this important safety measure. The new Cohoes Boulevard will be a thoroughfare that takes into account all road users and is a complement to the growth that Cohoes has experienced and the development that will continue.”

Featured photo of Downtown Cohoes by Daniel Case via Wikipedia.