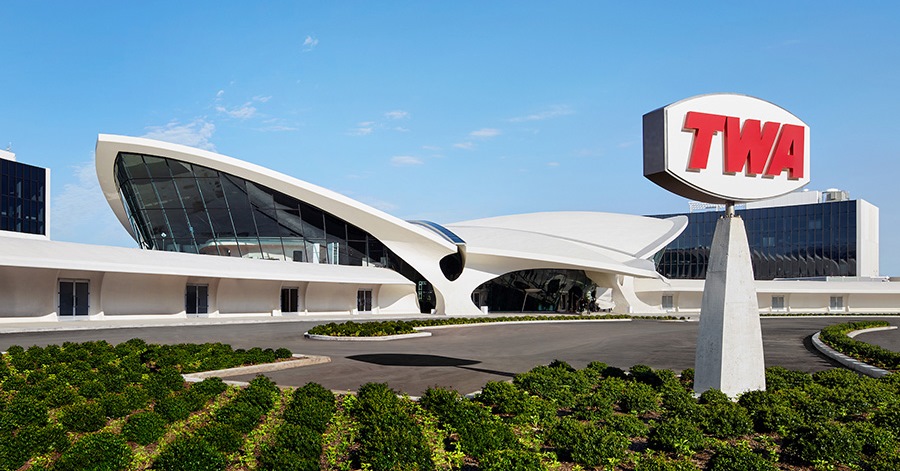 “We need those to pay for this,” says redeveloper Tyler Morse, standing in the middle of Eero Saarinen’s iconic TWA Flight Center at John F. Kennedy Airport in the Queens borough of New York City.

“This” is the Flight Center, which Morse has spent about $65 million restoring to its former glory, and which now serves as a spectacular lobby for his TWA Hotel.

As Council Member I. Daneek Miller explained, “The opening of the world-class TWA Flight Center hotel heralds Southeast Queens’ newly attained status as the gateway to New York City’s booming tourism industry, and will provide tangible gains to our local economy. The fact this occasion comes on the heels of the JFK Redevelopment Community Information Center’s recent launch is especially significant, as our workforce should be well positioned to take advantage of the many hospitality, retail, and service industry jobs the Flight Center will generate. I commend Governor Cuomo for his leadership in championing this project as well as his continued commitment to promoting local hiring in Southeast Queens throughout the revitalization of JFK Airport.” 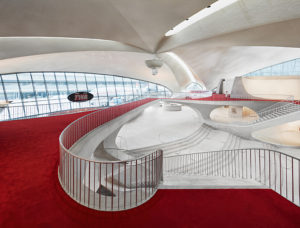 The new hotel, which was announced by New York Governor Andrew M. Cuomo in 2016, builds on the historic $13 billion vision plan to transform JFK airport into a 21st century facility that will continue to serve as the nation’s premier international gateway.

“The TWA building was ahead of its time, and it represented New York’s vision and creativity and boldness and outside-the-box thinking. New York has always been the state that led the nation in firsts, in reforms, in turnarounds and in troubled times. When the nation needed to find a direction forward, you could always look at New York and New York pointed the way forward,” Governor Cuomo said. “This rebirth of the TWA Hotel says we haven’t lost our imagination, our boldness, our creativity, our daring – and we are still one step ahead of everyone else. If you want to know where the future’s going to lead, look to the State of New York. The best is yet to be, and the TWA Hotel is a beautiful example.”

The TWA Hotel project was achieved through an ambitious public-private partnership on a 6-acre site in the center of JFK Airport, which serves approximately 63 million passengers a year and 1,300 flights daily.

The project has restored the terminal’s most iconic spaces, which will now include dining options such as Paris Café by Jean-Georges and the Ambassador’s Club.

Rick Cotton, Executive Director of the Port Authority of New York and New Jersey said, “The opening of the TWA Hotel at JFK creates an architectural gem as well as a symbolic step forward in Governor Cuomo’s vision to transform JFK into a world-class, 21st century gateway. The preservation and conversion of this world-renowned landmark offers a one-of-a-kind destination for international visitors and New Yorkers alike. As we celebrate this milestone, we look forward to many more, as this is just the beginning of JFK’s transformation into an entire airport that’s as welcoming, impressive and iconic as this beautiful new hotel.”

The facility, which is currently the only on-site, AirTrain-accessible hotel at JFK, will connect to Terminal 5 via Saarinen’s “Catch Me if You Can” flight tubes. It employs energy-efficient design, with LEED certification, and will be powered through an off-grid power plant that is located on the roof of the north hotel wing. The project was union built, with 3,700 construction jobs created, and will be union operated, with 795 total employees estimated throughout the entire facility.

Assembly Member Stacey Pheffer-Amato said, “The opening of the TWA Hotel is a huge step in the JFK redevelopment project. I applaud Governor Cuomo for making this a reality. The opening of this hotel is just one step of many within the redevelopment where residents, businesses and communities are able to benefit.” 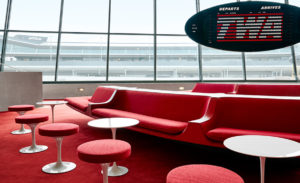 MCR Development invested $265 million to construct the hotel. Prior to the hotel development, in order to attract interest from the private sector, the Port Authority oversaw a $20 million modernization of the building consistent with its historical landmark designation. The Port Authority is also investing $8 million to connect the hotel to the Terminal 5 Parking Garage. Additionally, MWBEs were awarded more than $50 million in contracts for the construction of this project.

The TWA project was assisted by more than $36 million in federal rehabilitation credits and $5 million in state historic tax credits. The federal and state rehabilitation tax credit programs offer tax incentives to rehabilitate vacant and underutilized historic buildings. Administered by the New York State Office of Parks, Recreation and Historic Preservation, the state credit was introduced in 2006 and subsequently overhauled and reauthorized by Governor Cuomo to extend and enhance the program’s use.

Senator Leroy Comrie said, “The opening of the TWA Hotel is an exciting step toward our goal of revamping JFK Airport and meeting the expectations of the millions of travelers from around the globe who pass through it every year. I am pleased that $50 million in contracts related to this project were awarded to local MWBEs, and I look forward to continuing to work with my colleagues in the state and throughout the community to invest in the people and small businesses of Southeast Queens through the redevelopment of JFK Airport.”

The opening of the TWA Hotel ushers in a new era at JFK, and builds on Governor Cuomo’s JFK Vision Plan, announced in 2017. The $13 billion plan, including $12 billion in private funding, calls for an overhaul of the airport’s hodgepodge of eight disparate terminal sites into one unified JFK Airport by demolishing old terminals, utilizing vacant space and modernizing on-airport infrastructure, while incorporating the latest in passenger amenities and technological innovations. The first new gates are scheduled to go live in 2023 with the project anticipated to be completed in 2025.

Senator Joseph P. Addabbo, Jr. said, “As a life-long resident living within a mile from JFK, I am extremely excited for the opening of the brand-new TWA Hotel at the airport because it signifies to the rest of the world what we already know, that Queens is the place to be and represents a first-class welcome to all. This luxurious hotel will serve millions of visitors who fly into Queens and provide the credible jobs so crucially needed in the economy. I want to thank Governor Cuomo and everyone who was involved in bringing this ambitious project to fruition.”

The new passenger facilities will feature significantly larger waiting areas with high ceilings, natural light and modern architecture coupled with interior green space, exhibits and art featuring iconic New York landmarks and local artists. World-class retail, restaurants and bars will include locally-based restaurateurs, craft beverage options and Taste NY stores. Free, high-speed Wi-Fi and an abundance of charging stations throughout the terminals will enable passengers to stay connected at each step of their journey. State-of-the-art technological improvements will also be part of the terminal upgrades, with security enhancements – such as radiation detection and next-generation identification of unattended packages.

Congressman Gregory W. Meeks said, “The TWA Hotel exemplifies the overall mission behind JFK’s redevelopment, remodeling its history to reinvent JFK into the future. This public-private partnership strengthens both our tourism industry and local business community, including the MWBE’s contracted for the hotel’s completion. With the project’s focus on local and diverse hiring, and its available convening space, the TWA Hotel won’t just be part of the airport but part of the community. I look forward to my continued work with Governor Cuomo to transform JFK into the transit hub we can be even more proud of.”

The Vision Plan also calls for increasing the number and size of gates, improving parking availability, an array of airside taxiway improvements to allow for bigger planes and reduced gate congestion, upgrading the AirTrain JFK system to handle increased passenger capacity, and enhanced roadways on and off the airport. This includes better access to JFK from regional roadways, particularly the Van Wyck Expressway and the Grand Central Parkway, including the Kew Gardens Interchange.

Council Member Donovan Richards said, “The opening of the TWA Hotel is the first big step in the direction of a newly-transformed JFK Airport. This project delivered on thousands of new jobs for New Yorkers and highlights the historic architecture of the old TWA terminal. The new facility will also offer new dining options and much-needed event space in the Southeast Queens community. I’d like to thank Governor Cuomo for his commitment to revitalizing JFK Airport and delivering on this first project quickly and efficiently.” 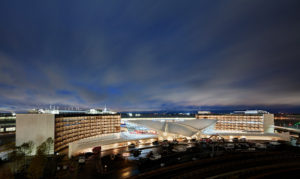 In October 2018 Governor Cuomo announced the formation of the JFK Redevelopment Community Advisory Council, composed of elected officials, community boards, non-profit organizations, civic organizations and clergy. The council is tasked with working with the Port Authority to expand community outreach efforts that are already underway, ensuring that the project solicits feedback from local stakeholders, MWBE businesses and job seekers. The TWA Hotel has worked with the council over the last few months on a local hiring effort for this project.

Tyler Morse, CEO of MCR and MORSE Development concluded, “Since announcing that we would reopen the TWA Flight Center as a hotel, we have received thousands of letters, emails and calls from people around the world expressing their love for Saarinen’s beloved cathedral of aviation. We feel the same. It has been an honor to restore one of the most iconic buildings in America. We are proud to play a part in Governor Cuomo’s plan to revitalize our region’s airports.”

This impressive reuse project has transformed the former Trans World Airlines terminal—which was designed by world-renowned architect Eero Saarinen in 1962 and closed to the public in 2001—into the centerpiece of a modern hotel that will preserve its mid-century design and offer lodging and best-in-class services to millions of travelers each year.

See related article by Fred A. Bernstein in Architectural Record.