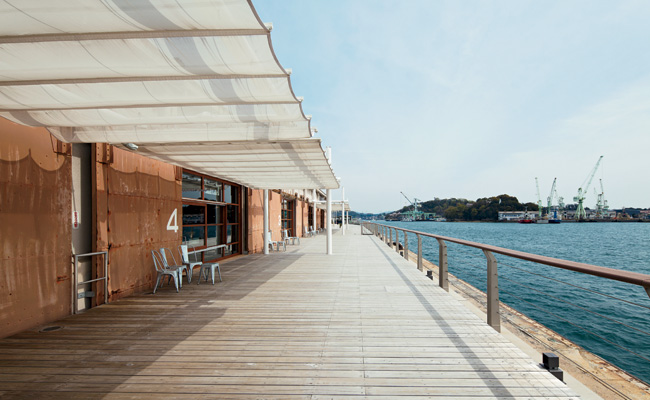 With a name that sounds like a rock band and a program inspired by the current biking boom, Onomichi U2 is an uber-cool hotel where cyclists can stay with their wheels.

A repurposed warehouse erected in 1943 in a town 45 miles from the city of Hiroshima, Japan, the building includes 28 bike-friendly guest rooms plus assorted shops and eateries.

The project is the product of Suppose Architects, the Hiroshima firm headed by Makoto Tanijiri. An avid cyclist himself, Tanijiri scored the commission after winning a competition hosted by Hiroshima Prefecture. What the client had was an old building and an objective of luring visitors to Onomichi, a town of 145,200 on the Inland Sea.

What the architect offered was a clever solution that combines history with the here and now.

While Tanijiri designed Onomichi U2 for bikers, the original 25,000-square-foot structure was built for trucks carrying cargo to ships going out to sea. Despite its industrial origins, the warehouse did not meet the current earthquake code and required supplemental below-grade beams. So Tanijiri inserted a new lightweight-steel frame to support his architecture, essentially creating a building within a building. “We treated the inside like an outside site,” explains the designer.

Intended as both a tourist draw and a town amenity, the project, whose name derives from the warehouse’s original designation, Uwaya Storage #2, sits on the waterfront. It is just a short distance from Onomichi’s train station, a frequent launch point for bike enthusiasts heading to the nearby Shimanami Kaido, a 45-mile-long cycling course spanning eight small islands.

Facing the station, the main entrance is at one end of the 304-foot-long structure. It leads into a cavernous 21-foot-high lobby and a cycle shop off to one side. Straight ahead are an open-kitchen restaurant, a bakery, shops, and a café where bikers wheel up to order lattes from a takeout counter outside.