In 2016, the city of Hoboken, New Jersey acquired 6 acres in Northwest Hoboken to transform a former industrial site into the city’s largest public park. Originally marshland, this area of Hoboken was infilled and the site was occupied by a chemical plant from 1922 until 2004. 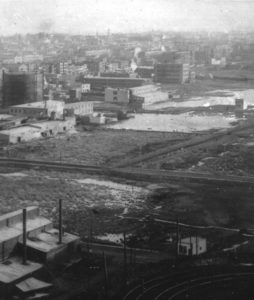 Following Hurricane Sandy in 2011, the City’s 2014 Green Infrastructure Strategic Plan and 2015 Re.Invest Feasibility Study identified the site’s potential as a green infrastructure and flood management park, as part of the US Department of Housing and Urban Development‘s (HUD) Rebuild by Design competition (RBD) competition, which was launched in 2013.

The site was purchased by the City in December of 2016 from BASF, a German company that has contaminated hundreds of properties in some 80 nations.

Prior to site acquisition, BASF completed site-wide soil remediation and capped the entire lot with 6-inches of asphalt. The former BASF property was remediated to levels that safely allow for many activities, including public access and use for passive and active recreation. 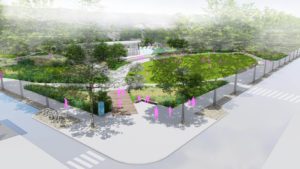 At five acres, the park will become New Jersey’s largest park dedicated to boosting resilience, and will be Hoboken’s largest park. The Northwest Resiliency Park will balance nature, culture, and sports, plus above and below ground infrastructure to withhold up to two million gallons of rainwater during storms.

“Hoboken’s Northwest Resiliency Park will become a national model for parks across the country, as it combines critical open space needs along with major infrastructure to reduce flooding,” said Mayor Bhalla. 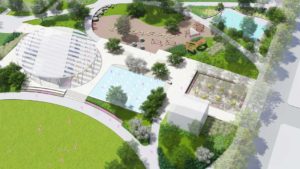 “When constructed, the park will provide both active uses for residents of all ages, as well as passive space for relaxation and enjoyment, reflecting the needs of our community. I thank the many partners at all levels of government who have made this milestone possible, and look forward to celebrating with residents when construction is complete!” he added.

“The Northwest Resiliency Park is an enormous achievement that will improve the quality of life for Hoboken residents by adding much needed park space, while also providing a critical contribution to Hoboken’s Rebuild By Design strategy to protect our City from flooding,” said former Mayor Zimmer. “Thank you to everyone in my Administration who worked so hard with me to make this possible, and thank you to Mayor Bhalla and his administration for moving this critical project toward the finish line.”

As New Jersey’s largest resiliency park, and one of the only resiliency parks in the United States, the Northwest Resiliency Park will include above ground green infrastructure such as lowland gardens and trees to absorb and manage up to 1 million gallons of water during rain events. Additionally, a large tank and filtration system will be built underground to store an additional 1 million gallons of rainwater. Rainwater will be released back into the system after storms, reducing flooding and combined sewer overflows to the Hudson River. 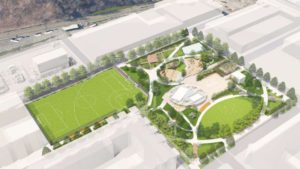 The Northwest Resiliency Park will have active park amenities, including playground equipment for children of all ages, a multi-purpose athletic field, basketball court, ice-skating rink, fountain, play valley and fitness loop. Passive park amenities will include a large lawn, park pavilion, lowland gardens, and seating areas. The design of the park was produced through a robust public process that involved input from community members through meetings, surveys, and listening sessions.

The park was acquired and will be built with low interest loans from the New Jersey Infrastructure Bank, with principal forgiveness because of the park’s green infrastructure features. The buildout of the park received funding from the Hudson County Open Space Trust Fund and is expected to receive additional grant funding.

“We are proud to contribute a half of million dollars to this transformative project which will not only greatly increase green space and recreation opportunities for Hoboken’s residents, but it will also address major storm water management issues in the area,” said Hudson County Executive Tom DeGise.

“For the last two decades, Hudson County has supported our municipalities with our Open Space Trust and other dollars to grow and improve our open space which not only improves our quality of life but increases property values in every community,” he concluded.

Construction for the park is anticipated to last up to three years.

Unless otherwise credited, all images are courtesy of City of Hoboken.