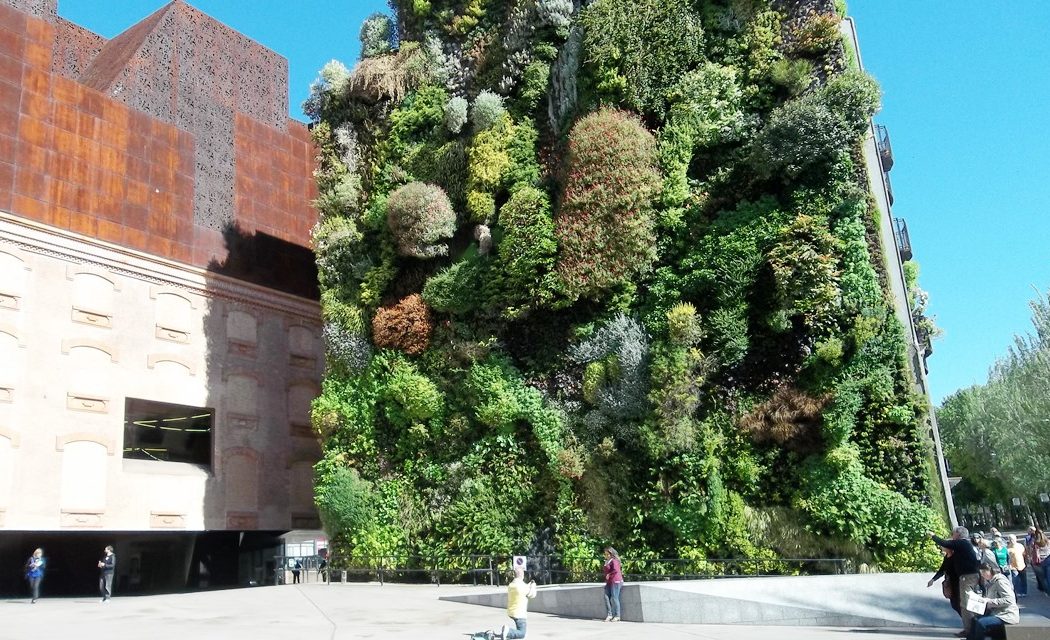 Green walls—like the one pictured above—are part of Madrid, Spain‘s new strategy to fight climate change. While most folks immediately think of coastal cities when they contemplate the risks of climate change, Madrid is far from the ocean.

Its problem is the urban heat island effect, caused by too few trees and too much automobile-oriented infrastructure (paved streets, parking lets, etc.) As the global climate warms, the heat island effect is exacerbated.

The Spanish capital is one of the hottest, driest cities in Europe — on the front lines of this battle. It’s just emerging from a punishing recession and doesn’t have a lot of money. 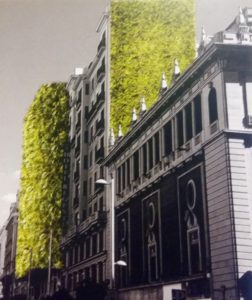 So the city has come up with a simple, low-tech solution: plants. Lots of them. Madrid aims to cover as much of its surface as possible with greenery — roof gardens, walls and empty lots.

“You can see it changing — in summer, it’s an incredible panel of colors,” says Isabel Fuentes, director of Madrid’s CaixaForum. “It helps to avoid noise, and it also helps to fight contamination because 460 [square] meters of plants give a considerable amount of oxygen to the air.”

The vertical garden also insulates a south-facing wall from heat in summer and cold in winter. And it helps to lower Madrid’s overall temperature, by boosting green space.

Scientists recognize the importance of greenery in combating climate change, and Madrid is not alone in enlisting in the fight. 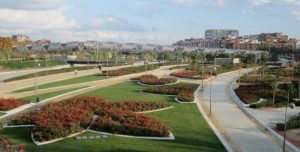 But it’s not just about greenery: previous planning mistakes are being remedied to correct the overly car-oriented nature of the city. For instance, Madrid buried a major urban highway in 2003 — routing it through an underground tunnel and then planting trees above. The area has since become one of the city’s most popular parks, call Madrid Río.

Madrid Rio is a huge recreational and cultural area both for its landmarks and leisure facilities and the culture it houses, and for being a reference point from which to contemplate and come into contact with monumental Madrid. 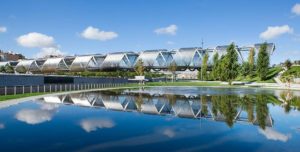 From the playful viewpoint of the new system on the bank of the Río Manzanares, it provides the perfect recipe for a good time with family.

Children enjoy the 17 play areas found along the Salón de Pinos, all with swings made from sustainable, natural materials such as wood and hemp rope, forming webs, hammocks, hanging bridges or climbing vines. Each zone has different characteristics according to age, so there are areas dedicated for younger and older children based on skill, balance and strength.

But it is also a place where adults can enjoy a great cultural offering. For all cultural activities (exhibitions, music festivals, theater, etc.) that are held in Matadero Madrid, you pass by new bridges and beautifully constructed bridges. 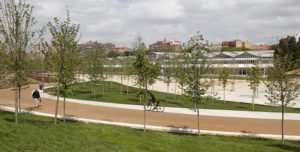 In Madrid Río there is also the Puente del Rey, where the Spanish football team celebrated its victory in the South Africa World Cup in 2010.

All told, Madrid can certainly be said to be leading the way in resilient redevelopment, putting most cities here in the U.S. to shame.