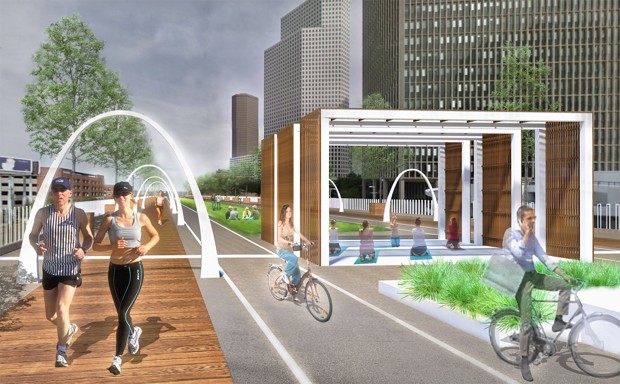 Note from Storm: As with many other major cities in the U.S. and around the world, Houston has been suffering the effects of a badly-planned urban highway for many decades. We’ve covered this Houston story in earlier issues of REVITALIZATION, as we have similar stories in Toronto, Seattle, Seoul and others. We’ll continue to do so until cities have rid themselves of these concrete testaments to the shocking ignorance of civil engineers and transportation planners as regards the vital importance of connectivity and pedestrians to healthy downtowns.

From the article: Like so many American cities in the 1960s, Houston built a raised interstate right through its core—a segment of Interstate 45 known as the Pierce Elevated. Despite objections that life around the Pierce Elevated would become “psychologically intolerable,” officials advanced the plans anyway. They even argued the area beneath the highway would be a pleasant place to, say, play basketball.

Shocker: no one played basketball under I-45. “I see that as a public relations attempt to say, ‘No, really, honestly, it’s not that bad!‘” says Kyle Shelton of the Kinder Institute for Urban Research at Rice University, who’s documented this particular era. Instead, like so many other urban freeways, the Pierce Elevated divided the city, mangled the street grid, and served as a barrier to local development.

But there’s hope yet for Houston. In conjunction with the Texas Department of Transportation, the city is advancing plans for what the Chronicle says “could be the largest freeway rebuilding project ever undertaken in the Houston area“—an effort that targets the Pierce Elevated for closure. So just as so many cities built urban interstates, Houston might join those finally removing them.