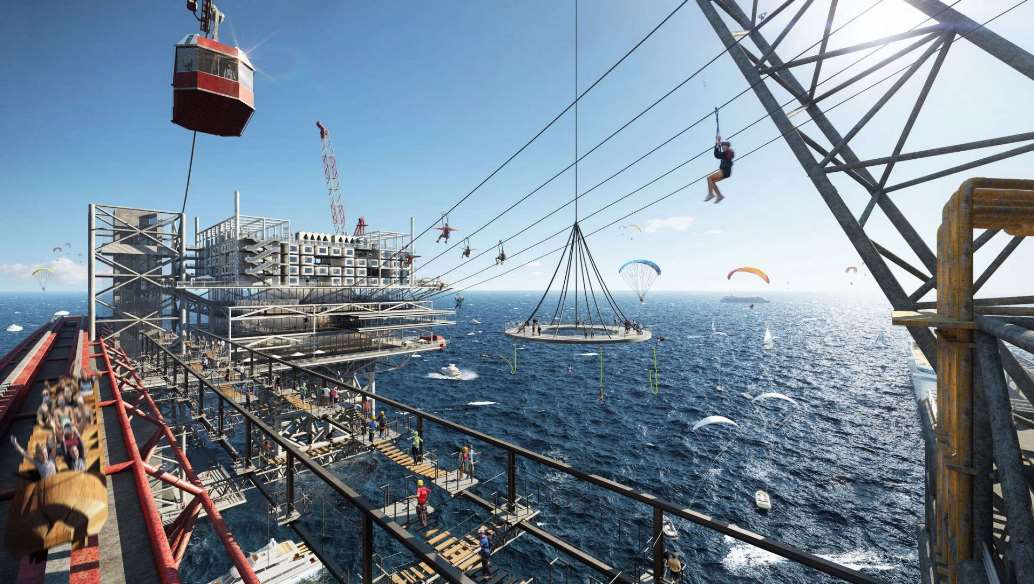 Maybe the only positive aspect of offshore oil drilling is that sea life quickly starts encrusting the underwater surface area of the rigs. Older platforms thus often end up supporting impressive ecosystems, sometimes in areas that would otherwise be marine deserts.

This doesn’t offset the vast harm done by the drilling—from both oil spills and climate change—but it is, nonetheless a positive aspect.

In a rare example of agreement between oil companies and environmentalists, keeping the rigs in place after the well is capped and the platform decommissioned is often recommended. Of course, the oil companies are just trying to save the expense of dismantling it: concern for biodiversity is just a smokescreen on their part.

But what if the platforms could be repurposed, becoming both economic assets and ecological assets?

The project is part of PIF’s strategy to diversify—and thus make more resilient—Saudi Arabia’s economy by expanding its international entertainment and tourism offerings.

Unfortunately, THE RIG is only “inspired” by offshore oil platforms, design-wise: the promoters were neither clever enough nor environmentally responsible enough to actually reuse existing rigs. (To be more charitable, maybe the original idea was to repurpose old rigs, but they couldn’t find any in a viable location for tourism, or couldn’t find a group of them that were close enough to each other to connect into one project. I’d like to think that was the case.)

THE RIG is thus reminiscent of those clueless real estate developers who use brand-new shipping containers in their “hip” urban projects, missing the whole environmental point of the container-based construction trend, which is to reuse old containers.

THE RIG’s promoters say that they seek environmental protection for the project area, “in line with global best practices and in support of Saudi Arabia’s efforts to preserve the environment“. These protections would apparently start after they have damaged the ecology by building THE RIG.

So, why are we covering THE RIG in REVITALIZATION? Because it could serve to inspire responsible developers elsewhere to repurpose the world’s thousands of abandoned (and soon to be abandoned) offshore oil platforms, and preserve the “biomes” they have accidentally created.

That being said, Saudi Arabia is certainly wise to (very belatedly) attempt to diversify their economic dependency on oil. PIF has established several major projects and companies in various regions within the country, including the Red Sea Development Company, Alsoudah Development Company and the Cruise Saudi Company.

What would probably be more appropriate than tourism, however, would be becoming a clean energy leader while building a restoration economy based on restoring their natural resources.