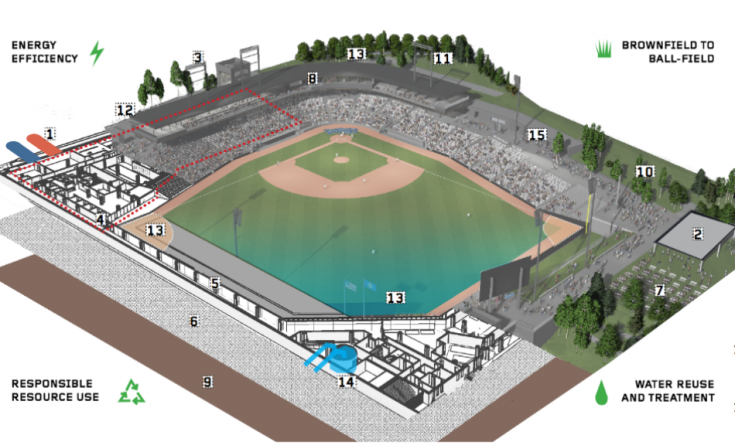 Several sports venues justifiably can lay claim to the coveted “Greenest Stadium In the U.S.” title.

Levi’s Stadium, the LEED Gold-certified home of the San Francisco 49ers that will host Super Bowl 50 in February (which I profiled here when it opened last summer), certainly merits support.

But a soon-to-open stadium across the Mississippi in St. Paul, despite its relatively modest minor league baseball pedigree, really may be in line to wrest the title away from its bigger brethren.

While green goliaths such as Levi’s Stadium and TCF Bank Stadium almost certainly will have a bigger environmental impact due to their sheer scale — bigger crowds, higher league profiles — perhaps CHS Field, the new, 7,000-seat home of independent minor league baseball club the St. Paul Saints, will win one for the little guys.

It sits on a transformed site that was once among the 10 most contaminated brownfield sites — land previously used for commercial or industrial purposes that has been contaminated with hazardous waste and/or pollution — in the Twin Cities.