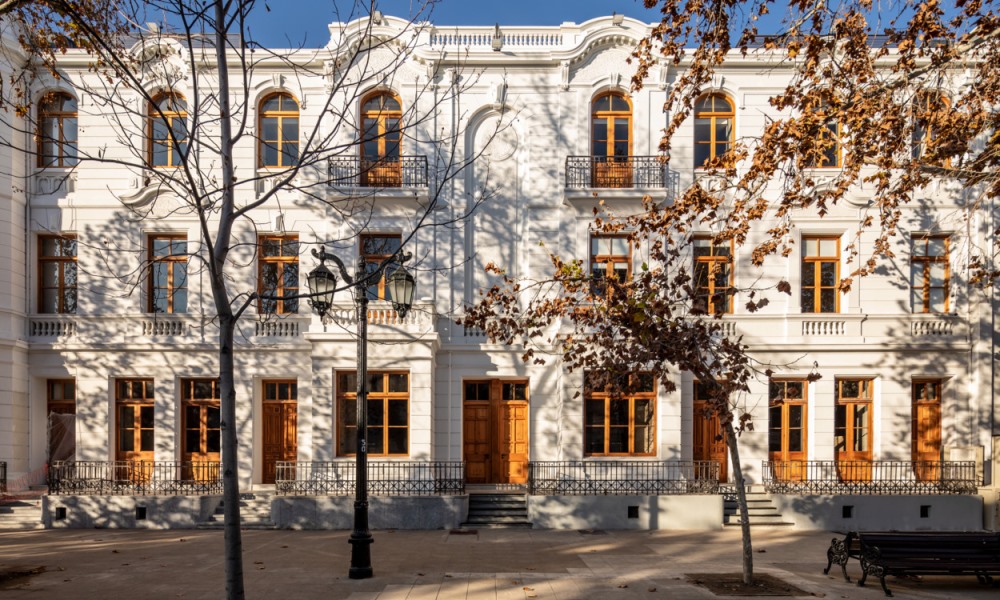 In the historic heart of Santiago, Chile, the architects at Martin Schmidt Radic Arquitectos Asociados (MSRAA) were given the challenge of restoring a much-loved heritage building that had been gutted by a devastating fire.

But they were also told that it needed to be revitalized…requiring that it be modernized to fulfil current economic needs.

Here’s how they did it, in the architects’ own (translated) words: 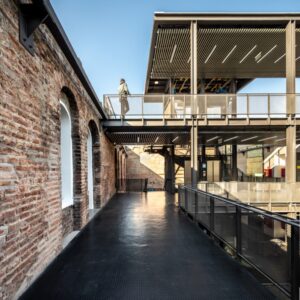 The heritage intervention proposal on this derelict property seeks to redirect its use with an orientation towards flexible workspaces to enhance and diversify the educational nature of the sector.

For this, it is necessary to reinforce and rebuild the original facades and construct a new building that reconstitutes the rhythm of use and activity that today has been interrupted by the programmatic void left by the fire leaving the scenographic facade.

To be known as a mixed space, both in its use and its materiality, which considers in its proposal the vestige of the destroyed house, where you can work, eat, walk, and take pleasure of, in the middle of the university neighborhood of Santiago. 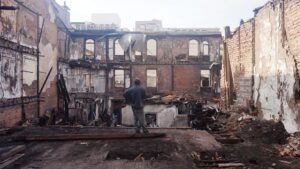 In 2016 a devastating fire left in ruins an old house of declared Historic Conservation located on the traditional Av. República in the historic center of Santiago. The original house, dating from the beginning of the last century, was conceived as an apartment building, with three floors and a rear garden.

Over the years, together with the neighborhood, it underwent different program changes from its original conception, ending up as an academic building and its garden was built with a poor quality building, which was also destroyed by the fire.

Only its front and rear facades and the perimeter dividing walls, all of simple masonry, three stories high, remained standing. The interior, originally constructed in wood, and the building that occupied the rear garden were lost, leaving these walls in an unstable situation. 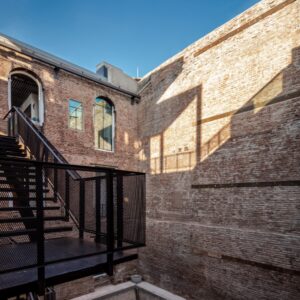 The main facade along with the adjoining corner house maintains the historical character that gives great value to the avenue. So, there is the utmost importance to preserve them, both for the Council of National Monuments and for the Directorate of Municipal Works.

The project is based on restoring not only the main facade of the building, as a condition of both entities, but also the three walls that contained the original project, two dividing walls, and the back wall that delimited the building with the lost garden.

The project’s intervention strategy aimed to preserve the existing walls respecting and maintaining the image of the pre-existing structure and the immediate surroundings. 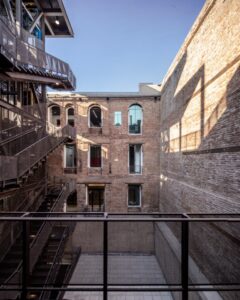 In turn, understanding the patrimonial nature of both the Historic Conservation Property as well as the sector, which is presented as a consolidated neighborhood.

For this, we proposed an interior structure that supports and uses the existing facades as its own, through a contemporary building of great spatiality, flexible, that allows as many uses as possible for the new building.

Under the condition of the regulatory plan, which requires the sector to leave 30% free of building per floor, it was decided to concentrate this required void on a single central courtyard that carries natural light and ventilation inside the building, also focusing the horizontal and vertical circulation of people, thus becoming the center or heart of the project. 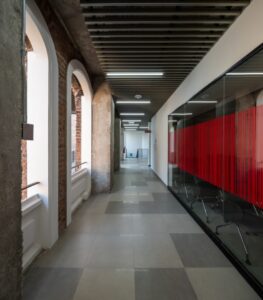 For this, a building with its facade facing Avenida República, which takes charge of the main facade, using natural light both from the street and through the new patio, and a second building built in the place of the old garden.

The latter, illuminated and ventilated through the proposed new patio, being supported by the rear facade of the original building, but in this case, that imposing facade of simple masonry left bare and exposed as the facade of the interior patio.

This, along with the dividing walls of the building also left bare, builds an atmosphere of contrast between the material quality of the brick, the metallic structure of the vertical and horizontal circulations, and the contemporary concrete. 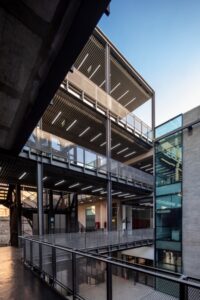 Complex logistical work was necessary in order to carry out the new project.

It began with the reinforcement of the existing facades with metal structures that would be dismantled as the definitive concrete took over the structuring of the existing masonry walls to be preserved.

As the new project sought to make the property more profitable, two floors were designed below the natural ground level.

With this in mind, the excavation had to take into account the support of the masonry walls and allow the new building to be executed safely.