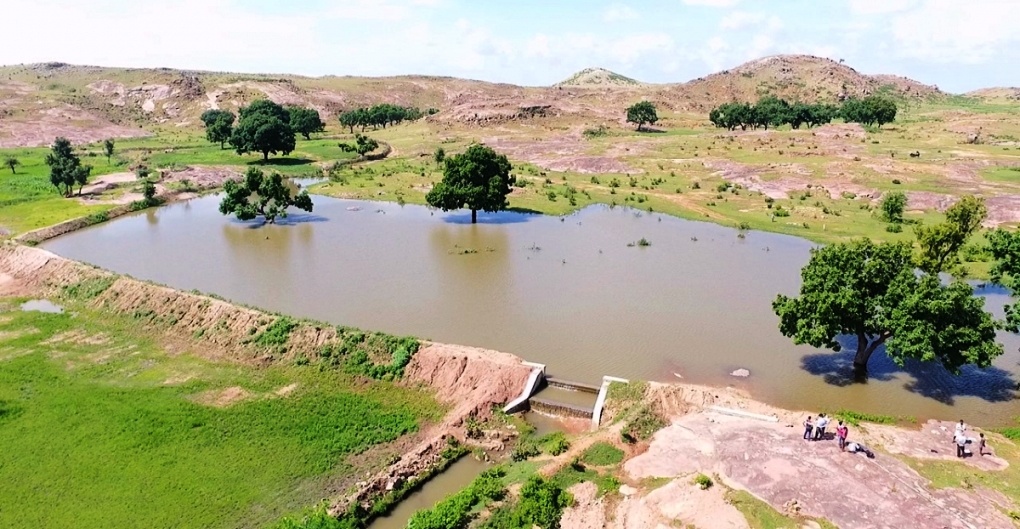 The world of water management is replete with stories about traditional systems that break down, such as the one reported in November from Karnataka, South India.

Age-old, decentralized approaches to managing water and watersheds do fall apart, leaving farmers high and dry. However, a remarkable study published in the Journal of Hydrology documents just how rapidly farmers can reap the benefits when an old system is restored and enhanced.

Researchers at the International Crops Research Institute for the Semi-Arid Tropics (ICRISAT) and their collaborators selected for a five-year study two degraded watersheds in the hilly, semi-arid region of Bundelkhand, which is divided between Madhya Pradesh and Uttar Pradesh in central India.

Farmers in the region – a third to half of whom subsist below the poverty line – live in villages that traditionally have an earthen rainwater harvesting tank called a haveli. These havelis act as reservoirs during the monsoon (June to September), and after draining they are used for crop cultivation during the post-monsoon (October to February). By facilitating groundwater recharge the system ensures water security for households, livestock and agriculture.

Farmers maintained their havelis together for hundreds of years, but many of the structures have collapsed along with the rural institutions that created them. When the monsoon comes now, rainwater quickly flows downhill. Rainfall is becoming more and more variable every year, with climate change cutting some rainy seasons down to a fraction. Yet even after a good monsoon, more than 80% of open wells soon run dry.

Bringing back the haveli system

From this rather sobering baseline analysis, the story gets much better. The researchers targeted one of the two watersheds for rejuvenation, first restoring a defunct haveli to service and upgrading its earthen wall with a concrete core for improved storage and longevity.

This was just the beginning of a five-year watershed monitoring, adaptive management and resilience-building scheme. The plan extended to other low-cost rainwater harvesting structures – check dams along drainage lines, and systems of contouring and bunds in farmers’ fields – along with tree planting and crop management demonstration. The second watershed, similar in all other respects, served as an experimental control.

Watershed management is nothing new in India, where more than $14 billion has been invested since 1990 to solve the connected problems of land degradation, water scarcity and unproductive agriculture. Public programs have even made a push to repair and maintain havelis in the last two decades, although the impact was short-lived due to frequent breach.

The shortfall has also been in monitoring and understanding the impact of such efforts – on hydrology, water balance, upstream–downstream trade-offs, land use and livelihoods. Where most watershed planning has been based on assumptions about these factors, the new study looked at five years of substantial evidence.

The data flows in

The team collected hydrological data through carefully placed runoff gauging stations, and through water level measurements taken monthly at all 388 dug wells in the intervention watershed. The results couldn’t have been clearer. The rainwater harvesting structures, which added up to 100,000 cubic meters of new storage capacity, significantly enhanced groundwater recharge by reducing surface runoff from an average 250mm a year to 150mm a year. The difference was very noticeable to every member of the community: well water levels stood 2–5 meters higher than in the control watershed.

The trend of extreme variability in monsoon seasons, linked to global climate change, was very evident in the five years of research, and this variability led to some of the most important findings. One was on upstream–downstream trade-offs. The data from Bundelkhand showed that the interventions did affect water availability downstream, but only in intermediate rainfall years; there was no loss downstream in very dry years, when runoff is minimal anyway, or in very wet years, when havelis release ample excess water.

The real difference the structures made was to the recharge of shallow groundwater aquifers. Following the interventions, a single recharge in a wet year could sustain groundwater supplies through two subsequent years of low rainfall – meaning that most dry years would not become drought years for farmers. Within the study period, 2015 was an exceptionally dry year, with just 404mm of rain. At the end of the monsoon, 30% of dug wells in the control watershed were already dry, whereas only 6% of the wells in the intervention watershed had run out of water.

A watershed breaks the cycle of upland poverty

What difference does a few more meters of groundwater make? A very large one, according to the study’s analysis of household farming changes in the watershed. The researchers gathered evidence through crop cutting estimates, taking samples from 50 farmers’ fields and extrapolating to estimate agricultural production in the entire watershed each year. Overall dairy income, too, was estimated from the livestock kept by individual households.

Secure groundwater availability led to shifts in cropping patterns throughout the agricultural calendar. Nearly 20% of fallow land was brought under cultivation, and farmers planted higher-value crops, expanding groundnut production in the wet season and barley and wheat in the dry season.

These three crops showed 50–70% increases in their yields. Cultivation of green fodder and vegetables spread from just 5 hectares to 70 hectares, and with more fodder, more farmers invested in dairy buffaloes. In the span of just a few years, annual household incomes shot up from USD 960 to USD 2,700.

Looking to other watersheds and some lessons from history

Clearly, there is untapped potential in the renovation and improvement of traditional rainwater harvesting structures. Uncounted thousands of these defunct structures exist all over India and in other countries, and they need to be re-examined and reconsidered to prepare for fluctuating rainfall regimes. Repairs and modifications are less expensive than many other solutions to drought, and the Bundelkhand study indicates just how effective these can be.

Looking to how such traditional systems were once sustainably managed, furthermore, reveals the role of communities and social mobilization in their success – another rich area of research that has also been recently explored in India in a study combining archaeology, history and collective action.

The Bundelkhand study did show that in years of intermediate rainfall, the haveli and other structures reduced flows downstream by harvesting nearly 40% of runoff. This reinforces the need for monitoring, impact analysis and management at larger scales, possibly with measures to compensate domestic, agricultural and industrial water users downstream.

Yet, from the perspective of equitable resource distribution, the study documents a significant boost for upland communities – typically some of the most resource-deprived and most vulnerable to drought and climate change. Rainwater harvesting in the uplands protects these communities from drought by retaining a larger fraction of their rainwater as groundwater, smoothing over uncertainties and making better livelihoods possible.

Photo (by Dr. Ramesh Singh/ICRISAT) shows a haveli structure in Birdha village, Lalitpur district, Bundelkhand renovated under ICRISAT’s Doubling Farmers’ Income Project. Runoff from most of the upland location is harvested in the haveli, while a long core wall covered with soil and a masonry outlet facilitates excess runoff.