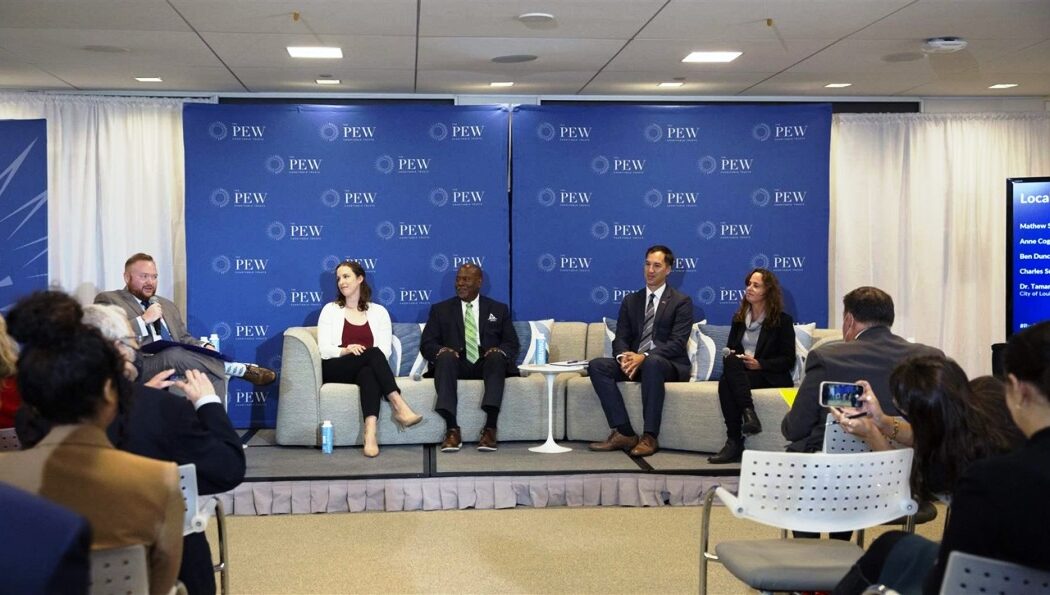 Cities, counties and regions are increasingly working together on revitalization and resilience efforts—often using new tools such as those now being offered by the RISING PLACES initiative.

But the need for such collaboration in the U.S. has become urgent, thanks to vast new federal funding resources. Communities don’t want to waste a golden opportunity to jump to a new trajectory. So, the following exploration of that subject by The Pew Charitable Trusts is well-timed.

To sufficiently confront the worsening effects of climate change throughout the United States, federal, state, and local leaders must work together more closely, particularly to help states and localities access billions of dollars in new federal funding.

That was a key takeaway from “Resilience Planning Can Help Create a Disaster-Ready Nation,” an October 6, 2022 event hosted by Pew. It featured representatives from the White House and federal agencies along with state and local chief resilience officers from throughout the country. 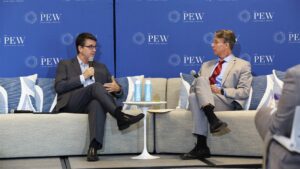 In his initial remarks, Andrew Mayock, federal chief sustainability officer at the White House Council on Environmental Quality, noted that earlier that day, more than 20 federal agencies had released progress reports on their first resilience plans.

“President [Joe] Biden made clear on Day One that [climate adaptation and mitigation] is a whole-of-government approach, and he gave us an assignment to move quickly,” Mayock told the audience of more than 500 in-person and online attendees.

One shared goal of the agencies’ plans is to weave climate awareness and action into everything the federal government does.

As an example, Mayock cited Tyndall Air Force Base in Florida, which suffered $5 billion in damage from Hurricane Michael in 2018 and “is now [being rebuilt] as an installation of the future and installation of resilience.”

That shift entails the U.S. Department of Defense working with local, state, and national partners to construct living shorelines and oyster reef habitats adjacent to the base to preserve water quality, enhance overall ecosystem health, and strengthen flood resilience. “Tyndall is more than an Air Force base,” Mayock said. “It’s a community … and people are part of that.”

In a one-on-one discussion with Tom Dillon, who leads Pew’s conservation work, Mayock added that the White House has also been working to ensure the long-term durability of climate policies.

“Four in 10 Americans experienced a natural disaster in 2021, and that’s [going to be] increasing in years ahead,” Mayock said. He noted that Verizon, which supplied more than $400 million in services to the federal government last year, has a climate durability requirement built into its contracts—including that the company locate communications infrastructure in places that are prepared to endure extreme weather events.

During a panel discussion, Richard Kidd, deputy assistant secretary of defense for environment and energy resilience at the Department of Defense, emphasized the link between climate impacts and national security.

Climate resilience, Kidd said, is tied directly to the Pentagon’s core mission: ensuring security for Americans at home and around the world. “We want to adapt the largest organization in the country to the realities of climate change,” he said.

In response to this shifting reality, his agency is investing more than $1.5 billion from the 2021 Bipartisan Infrastructure Law in wildland fire preparedness, fuels management, and post-fire restoration and fire science.

Werwa said his office released a five-year plan earlier this year identifying the areas of the country most at risk for wildfire and outlining what the agency must do in those places to reduce the impact of climate change. 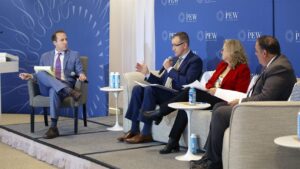 Richard Kidd, second from left, deputy assistant secretary of defense for environment and energy resilience, speaks during Pew’s event on flood resilience. He is joined by Pew’s Forbes Tompkins, left, who served as moderator, and Vicki Arroyo, associate administrator for policy at the U.S. Environmental Protection Agency, and Eric Werwa, deputy assistant secretary for policy and environmental management at the U.S. Department of the Interior.

Mayock, Kidd, and Werwa all also emphasized environmental justice as a priority in their work. And Vicki Arroyo, associate administrator for policy at the U.S. Environmental Protection Agency, noted that the agency’s new climate adaptation and implementation plan “recognizes there are disproportionate impacts for those who are already overburdened and underserved in our society,” and that “communities that have borne the brunt of discrimination are also at highest risk of heat and flooding and other disasters.”

Many of the solutions in EPA’s plan—derived in part from climate science and climate-impact mapping tools—will benefit nature, public health, and the economy, Arroyo said.

The event closed with a panel of state and city chief resilience officers, all of whom applauded the federal government’s climate planning and action while also calling for clearer and more streamlined processes for accessing federal funding.

As Charles Sutcliffe, Louisiana’s chief resilience officer, remarked, “There are so many different funding streams, and a lot [of the burden] is on localities and states to go find each one.”

His office tries to augment its limited capacity by working with nongovernmental organizations and universities, Sutcliffe said, but the federal government could help by providing guidance and training so that states and localities “can be better applicants” for funding.

Dr. Tamara Sluss, assistant director of advanced planning and sustainability and chief resilience officer for Louisville, Kentucky, suggested that the federal government drop its requirement that cities come up with matching funds to receive grants, “especially for large energy projects.”

Another theme that ran through the day’s discussions was the need for and reliance on data to drive policy. Anne Coglianese, chief resilience officer for Jacksonville, Florida, said her office is “modeling a lot of scientific rigor … [and] trying to make sure climate is considered in everything we do.”

That work will necessitate major policy reforms, she said. “There’s currently no step in our permitting process to deal with climate,” something that Coglianese hinted will change soon.

Others on the state and city panel spoke to the value of federal partnerships.

“We could not do this alone, with the volume of storms,” said South Carolina Chief Resilience Officer Ben Duncan. Successful partnerships start “with a goal and a mission,” he said.

“Ours is to lessen the impacts of natural disasters—on our citizens, our natural resources, wildlife.” To that end, Duncan said his office is “looking at our vulnerabilities and how to reduce them. Where we live and should not live. Where we build and should not build. If we need to buy those places out, looking at how to do that with minimal impact,” Duncan concluded.

See website of The Pew Charitable Trusts, where this article originally appeared (reprinted here, with minor edits, by permission).