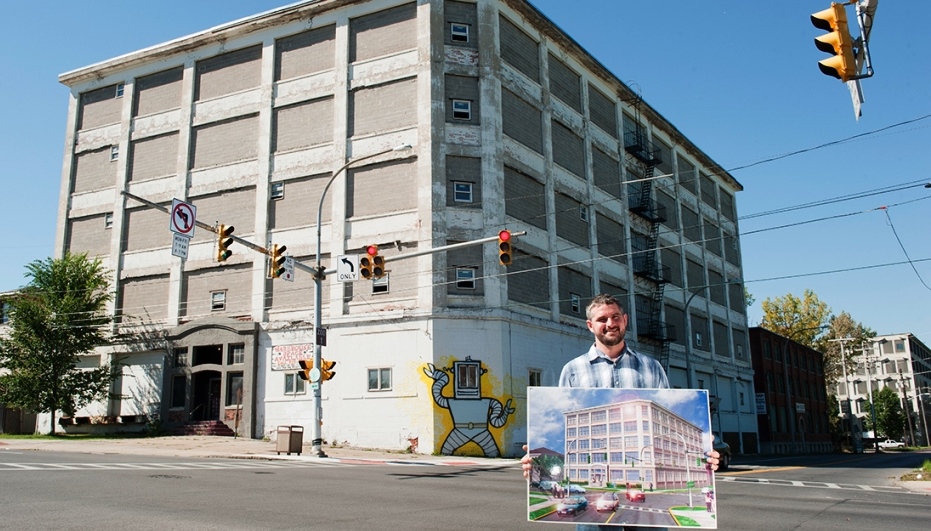 Back in 1998, Richard A. “Rick” Destito graduated from the State University of New York (SUNY) – Canton with an associate degree in Construction Tech: Management. Today, he’s putting those skills to work in leading a crusade to revitalize one of the poorest neighborhoods in Syracuse, New York.

It all began in 2005 when he purchased an abandoned 65,000 sq ft manufacturing building in the Near West Side neighborhood. He named it The Gear Factory, and dreamed of refurbishing the property and renting spaces to artists and musicians.

The Gear Factory now combines a remarkable history with modern energy and a promising future. It’s located at the crossroads of several diverse neighborhoods, housing studio spaces for artists and musicians.

“I wanted to create a place where artists could work together,” he said. Since then, he has been remodeling the spaces a little at a time. 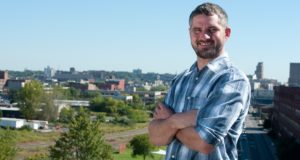 His tenants now include a company that makes cast-iron cookware by hand, a furniture designer, photographers, screen printers, painters, graphic designers and musicians.

After purchasing the Gear Factory, Destito wanted to do something more. In 2008, Destito also took on another project, buying a run-down Victorian house built in 1876. The house would take two years and $60,000 in renovation costs to transform it into something livable for he and his family.

He got the house for $1 through a program sponsored by Home Headquarters Inc. The nonprofit group purchases vacant properties and either renovates them or sells them to entrepreneurs like Destito, who have the ability to refurbish the homes themselves. He used the many skills he learned while earning his degree in Construction Tech: Management to restore the house to its former grandeur.

A native of Sherrill, Destito left New York soon after completing his studies. After traveling around the country for three years, he began to realize that the Central New York area had more to offer than he once thought. 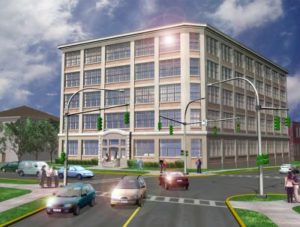 The Gear Factory is meant to combine the creativity of artistic cities like Charleston, SC and Nashville, TN with the quality and reasonable cost of living of Central New York. While other cities are tied to pre-established art communities, Syracuse has the luxury of being up-and-coming, rife with bubbling opportunity and a wide horizon open to the progressive minds willing to grab hold.

“One thing about places like Nashville and Charleston is they’re very done up,” Destito says. “It’s somebody’s thing and you’re entering into it. Although it’s great and they’re really awesome places, it’s also really expensive…I realized I really love it up here {in Syracuse} and I haven’t complained about the weather since. I came back here with the intention of making CNY how so many of us want it to be. People think they have to wait for it. They don’t.”

“Syracuse’s low cost of living and proximity to major metropolitan areas is unique,” he said. Destito has been trying to get others to see the benefits of living and working in the city and hopes his projects are the start of a full-scale renaissance of downtown Syracuse.

So far his efforts have caught the attention of local legislators and the media. The New York Times ran a feature story applauding his vision, and the state of New York recently awarded Destito $680,000 in the form of a state grant for improvements to the Gear Factory.

Destito grew up in the restaurant business, one traditional in his family since 1908. He was raised with the mindset that if there is a problem, “you don’t try to fix it,” he says. “You have to fix it.”

It’s with that mentality that Destito learned every facet of the family business and went on to study construction management at SUNY Canton, graduating in 1998, before leaving the northeast for three years.

Destito traveled extensively: South Carolina, Tennessee, Georgia, Florida, Texas, Colorado and beyond. He got temporary jobs from place to place, realizing he was studying each, learning what he loved and didn’t love about every city, most of all from the people themselves.

“I did door to door magazine sales,” he says. “It was the best job because I got to go to every house and learn about the community from the community. I also learned how to deal with rejection and that you can’t sell something you don’t believe in.”

Musicians and artists moved in, events took place and Destito remembers fondly walking up the back staircase, listening to the music morph as he rose and descended. Goth, pop and rock would fill the air and artists would fill the rooms. Destito estimates about 70 people actively used the building.

Around the time the he finished restoring his house (and the birth of his second daughter), the fire department visited the Gear Factory and deemed it not in compliance with code. The building was shut down for several months while Destito worked to get it into acceptable shape.

Since 2010, artists and musicians have filtered back into the building, inhabiting various parts of the space. But the work is far from done. In fact, it’s only beginning.

Plans for the Factory include converting the basement into 18 studios of various sizes to accommodate bands, both local and traveling, depending on size and budget. Stairwells will be renovated, windows will re-inhabit the their now-cemented holes and upper floor areas will be transformed into different types of workspaces, some shared and some private. Destito hopes he’ll also be able to create group working environments where artists can share equipment, leveling costs for everyone.

“Having a smaller space, that’s good for 90% of the stuff you want to do,” he explains. “But that extra 10%, those extras pieces of equipment…people who come out of school are used to having those $10,000 pieces of equipment at their fingertips. We need more community spaces where those pieces can be shared.”

The other benefit to these shared work environments is the gathering of creative minds that otherwise might not meet. “People having to work around each other and deal with each other and interact with each other, that’s what makes a place vibrant,” he explained. “I think, how can I help people use the building? And I hate the word help – it’s not charity. It’s working together with people. How can I add value to you being here? I want people to walk around, photographers to use their building as their backdrop. Whatever you want – go have at it.”

The space grows daily and Destito notes that he’s never had to search for renters. “I’ve never had a problem getting tenants,” he says. It speaks to the hunger of the area, one of youthful, energetic, creative people looking for a home – ready for a home. It’s the Gear Factory’s goal to welcome them in.

“I want to live in a place where people are outside, walking around, everywhere – all these people doing random stuff they’re super excited about. Just being in that type of place – you can’t help but want to do something yourself. People change a lot, but it’s rarely because something really good happens. It’s usually because something really bad happens. They need that energy to get moving. But then there’s this other place – when you go to an incredible music event, an art show – and you just want to go home and do something, make something. Instead of visiting that place – imagine living in that place. That’s where I want to be,” he concluded.

He admits there is still a long way to go but is optimistic about the future and wants more people to get involved in transforming the city.