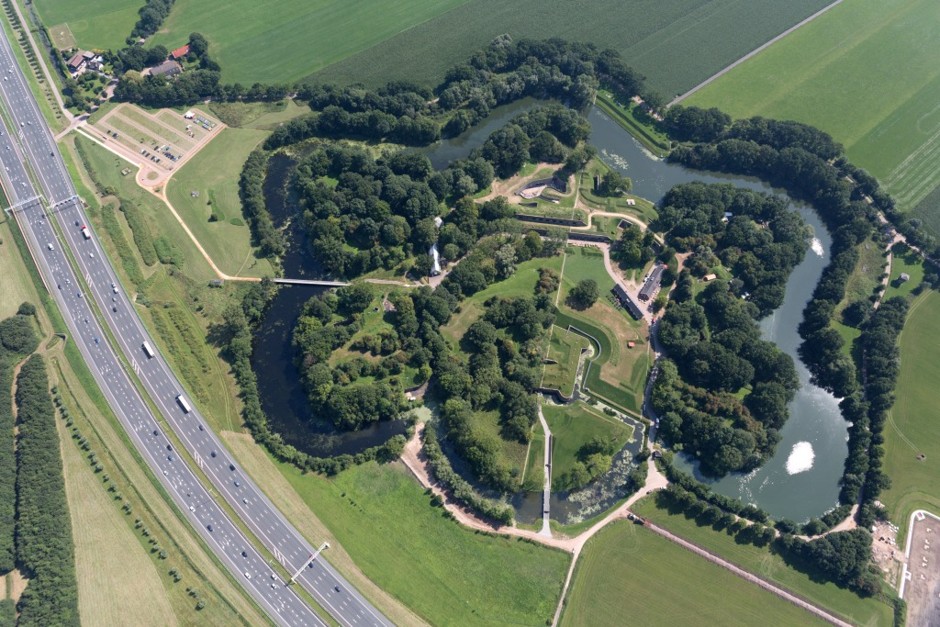 For 100 years, the moat surrounding Fort bij Vechten in the Dutch province of Utrecht was used to deter and repel attackers. Today it draws people to a cultural space that celebrates wild feats of landscape engineering; recasts the role of water with technocratic precision; and reuses military infrastructure as a progressive nature preserve.

For 40 years, the fort was little more than an overgrown archaeological find. It was owned by the state forestry agency, which wanted to maintain its status as refuge for the endangered flora and fauna that had moved in, including four species of bats. The local provincial government wanted a more educational and publicly accessible space, and it fell to Penne Hangelbroek and Adriaan Geuze of landscape architecture firm West 8 to balance the two ambitions.

They chose to maintain the forest that’s grown up over much of the site, but peel it back across a 386,000-square-foot cross section, restoring the fort to its state in 1880, from moat to moat across the entire island.

The restored landscape is a series of rounded and rectangular earth berms, walled in by brick and filled with 12 feet of soil and sand, all topped with sod. Hangelbroek and West 8 dredged soil from the moat to reshape the earthen mounds. These thick roofs cover 20 underground buildings, and filter rainwater that’s channeled into the surrounding moat. Bats were corralled into a handful of specially prepared underground buildings, made more hospitable for them by drilling small cubby holes in the walls and adding radiantly heated floors.

Fort bij Vechten started out as an impenetrable wall, and has ended up as a tourist destination.