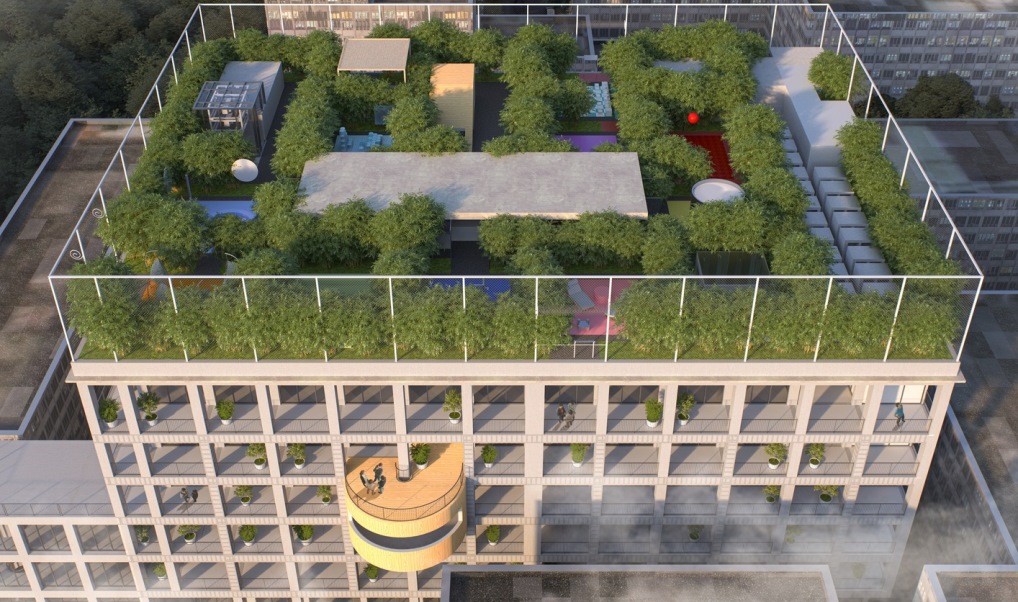 In China, Nantou is an ancient historic town. But today, it’s an urban village of the major city Shenzhen, dwarfed by the skyscrapers that surround it.

Recently, attempts have been made to revitalize Nantou as a cultural and creative hub, an example being that the town hosted the 2017 Bi-City Biennale of Urbanism and Architecture. 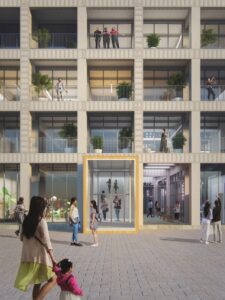 Now, Rotterdam-based design firm MVRDV’s If Factory renovation and redevelopment project has become the largest in a number of renovations proposed by real estate company Vanke. All of them boast designs by nationally and internationally renowned architects.

Rather than demolish and rebuild, MVRDV’s design sustainably renovates a disused factory building to form a “creative factory”, containing a mixture of offices for the Urban Research Institute of China Vanke and offices for rent.

“Nantou is a special and fascinating place. It is very important for Shenzhen. It’s really rewarding to return to this building after we exhibited here during the Shenzhen Biennale in 2017 with our ‘Vertical Villages’ and ideas for the future of cities,” says MVRDV founding partner Winy Maas.

“Our proposal draws on that ambition to make this part of Shenzhen a creative force, but it also remains in touch with the people of Nantou, their needs, and the history of the place,” he added. 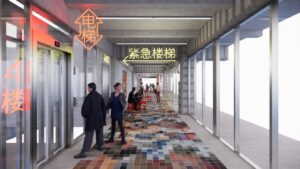 MVRDV revealed its design for the If Factory on August 18, 2020.

At the heart of the design is a public stairway, providing visitors with a view into the activities within and leading to a landscaped public roof terrace known as “The Green House”.

The repurposed structure also creates a 11.000 m2 office building for the Bureau of Public Works of Shenzhen Municipality Nanshan district and Vanke in Nantou, Shenzhen.

The main intervention is a simple cleaning and renovation of the old. With new transparent painting techniques, the old structure will be treated to resist aging. 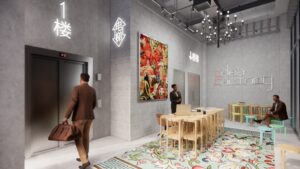 This preserves the traces of the building’s history, keeping the concrete frame that is now exposed due to the building’s dilapidated state – in line with principles of sustainability and the circular economy.

The exterior walls of the new offices are set back from this frame to create perimeter balconies that allow for circulation and chance encounters with colleagues. The walls are glass, while the floors of these balconies include glass blocks that mark the entrances to the building.

The most notable new addition in MVRDV’s design is a large public staircase, clad in wood to distinguish it from the concrete and glass that characterize the rest of the design. This staircase carves its way through the building from the ground floor to the roof, at one point protruding from the façade on the fourth floor.

Windows built into the staircase provide glimpses into the work being done in the offices, ensuring that this creative hub acts with transparency and remains connected to the community life of Nantou. Inside the staircase, mirrored glass and vibrant neon signage offer an aesthetic reminder of the early days of Shenzhen’s urbanization. 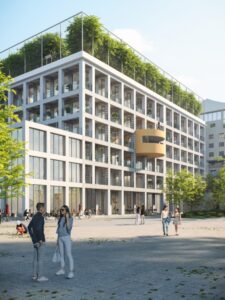 The third intervention is the “The Green House” on the roof. Upon exiting the staircase, visitors are greeted with a green bamboo landscape packed with amenities and activities. This is arranged to form a bamboo “maze” that divides the rooftop into different rooms, The Green Rooms, each containing a different activity, including a dance room, a dining room, a reading room, and many other themes for relaxation and gathering.

MVRDV has also designed a temporary canvas façade for the building to be used during the construction process. The temporary façade shows an image of how the building will look once complete, punctuated by large zips which open up the canvas to provide access to the ground floor, which currently hosts an exhibition for Shenzhen’s 40th Anniversary about the history and development of the Pearl River.

Once it is no longer needed, this canvas will be recycled into tote bags, making this temporary intervention another element in the circular economy thinking that underpins the project. MVRDV also worked with Studio Boris Maas to develop “Nantou Odyssey”, a special stool design used in a related exhibition being held in the Nantou Re-gallery.