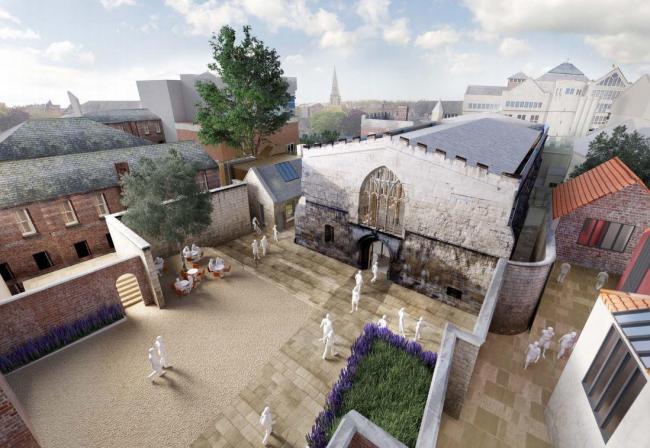 City of York Council has worked with main contractor VINCI Construction to deliver apprenticeship opportunities for students looking to get their start in the construction industry, and work on the restoration and redevelopment of one of York’s most historic buildings.

The building was constructed as a meeting place for the city’s guilds between 1449 and 1459. King Richard III was entertained in the building in 1483, and the Guildhall was the venue for the trial of St. Margaret Clitherow, a Catholic martyr, in 1586. it was also the place where a ransom of £200,000 was counted before being given to the Scots in payment for the release of Charles I in 1647 during the English Civil War, and where Prince Albert, the Prince Consort to Queen Victoria was a guest of honor at a royal banquet in the building in October 1850. At the north end of the Guildhall was a stained glass window painted by Henry Gyles in about 1682. 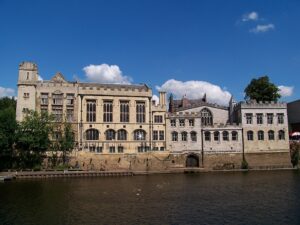 Photo of pre-restoration Guildhall by Kaly99 via Wikipedia.

Cllr. Andrew Waller, Executive Member for Economy and Strategic Planning said, “The Guildhall restoration project represents an iconic part of our city’s future development, and it’s fantastic to see it giving young people from across York the chance to develop their careers.”

“This just goes to show that as well as bricks and mortar, the Guildhall project is also building up new opportunities in vital skilled industries for students and apprentices. National Apprenticeship Week represents the perfect time to highlight some of the broad range of opportunities available for people in York looking to develop their skills and careers,” he added.

“Apprenticeships offer a fantastic chance to gain direct experience of a range of industries, and the Guildhall restoration project serves as a great example of the value of City of York Council’s partnerships in delivering these,” Waller concluded.

Making these opportunities available was an important aspect of City of York Council’s tender process, and has given students a chance to develop practical experience of an active construction site, complementing the skills they have developed in their studies.

Whilst on placement, these students have been given the opportunity to take part in building and engineering activities in a real construction environment across a variety of roles, from project management to carpentry and consultancy.

Those who took up the opportunity were not only able to develop practical skills but also receive guidance from apprenticeship supervisors, helping them make the best choices for their future careers.

Rob Henderson, Project Manager, Vinci Construction UK said, “It has been fantastic to provide so many opportunities on this unique project to those undertaking an apprentice course in various trades.”

“One of the highlights has been that we were able to offer someone a Technical Apprentice role with VINCI following their successful work placement with us where they decided that a site based engineering role is really what they wanted to do,” he continued.

One student, undertaking a construction course at York College, took the chance to experience life as an engineer working on site.

Following this, she was rewarded with an offer of employment at VINCI Building, and will now be working toward qualifying as a Civil Engineer at the company.

Rendering of the eventual restoration and redevelopment of the Guildhall courtesy of VINCI Construction UK.