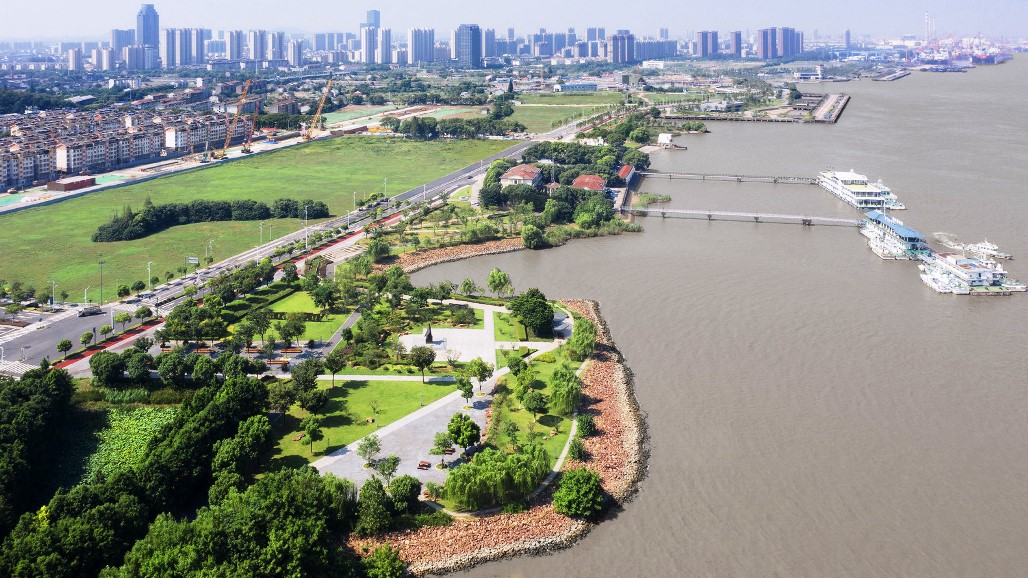 In China, the city of Jiangyin is on the Yangtze River, the world’s busiest working river. 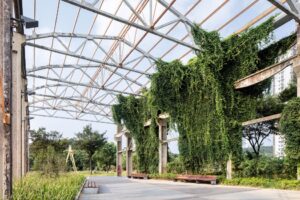 The city is now regenerating part of its industrial docklands into a high density live-work district.

Stage one of this major project is the creation of a 4km public realm along the river edge.

The design was selected through invited competition.

Here’s what the designers at BAU Brearley Architects + Urbanists say about the project: 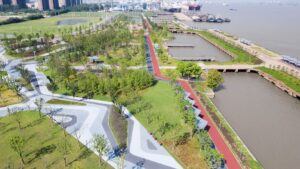 This project rehabilitates, preserves, enhances and extends a raft of microhabitats.

Complexity of the existing river edge is formally maintained, enhanced and secured with loose rock scaled for habitat.

A new corridor of indigenous trees and lower story plants weaves through the project’s length.

It connects the Ebizui mountain ecological node to the east with the canal eco corridor towards the west. 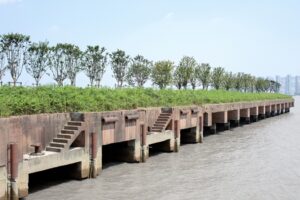 Overlooking the two-kilometer river from the worn concrete docks presents an overwhelming scale and sense of the sublime.

This design preserved the docks. Necessary new interventions have been given the scale, robustness and clarity of the context.

While the future district promises to be filled with vibrancy, and much of the landscape is rich in complexity, the wharf edges will provide citizens with a rare place of escape.

Continuity with the Past. 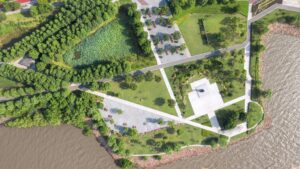 The eastern portion of the site was recently a functioning ship building facility.

The design maintains traces of the site’s history and overlays a number of ecological, circulation and programmatic layers.

The result is a complex palimpsest supporting inclusive and diverse open spaces and activities.

Jiangyin’s origins as a port city date back to the Tang Dynasty (618-907 AD). A plaza, park, and fish restaurant is established to commemorate the Shiyu Port and fish market, dating from the 1500s.

Leisure infrastructure for the new era. 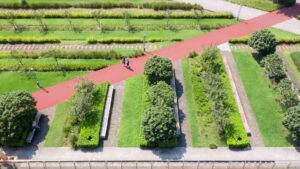 After a hiatus of nearly fifty years China is prospering and its citizens are rediscovering all variety of leisure pursuits.

This is the city’s largest playground for the very young to the very old. Linked by a 4km jogging track are dozens of outdoor sports courts and frequent gym equipment stations for public use.

A more leisurely path weaves the length of the site and connects several large children’s playgrounds, a skate park, and numerous groupings of exercise equipment for the elderly.

Frequent throughout the landscape are dancing plazas, a popular local pursuit. A host of pavilions, tables for games, and lawns for picnics, tents and programs yet to come. The park ushers in a novel, exotic era of health and play. 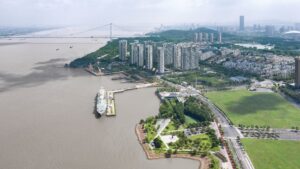 To the west a narrow boardwalk has been installed beyond the site to enable access around the steep mountain edge.

The Docklands Park smoothly connects to the emerging urban district. Plazas and city-river view corridors are located on street axis.

The bicycle path in this docklands park has initiated a 20km city bicycle loop and the emergence of a city wide connected park network.