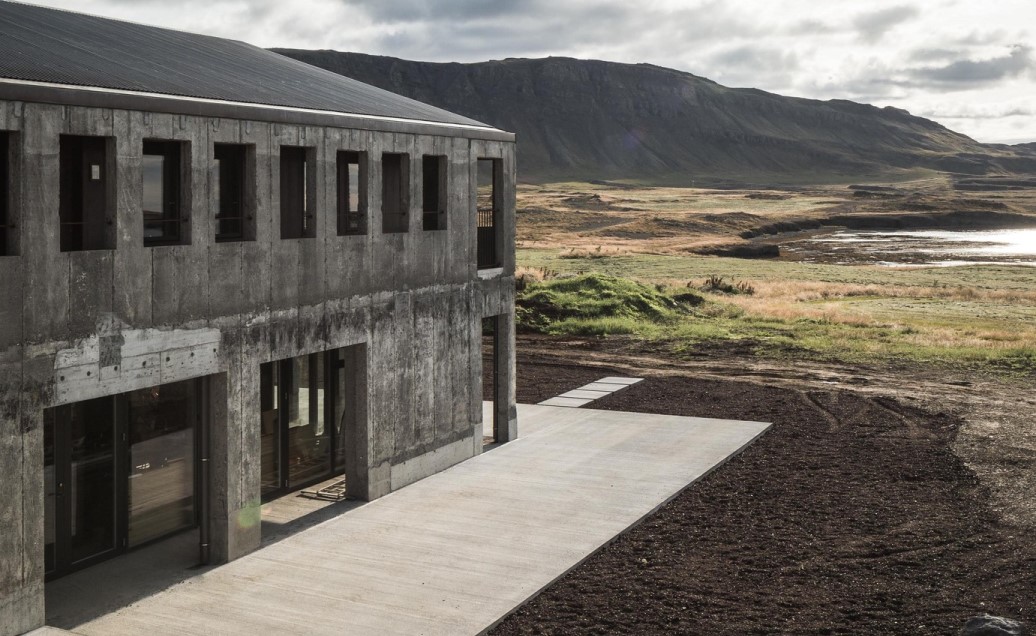 On the northern shore of the Snæfellsnes peninsula of western Iceland, Drangar is a large estate. Until recently it was a working farm with a collection of generic buildings built in the early eighties to serve farmers and their animals. 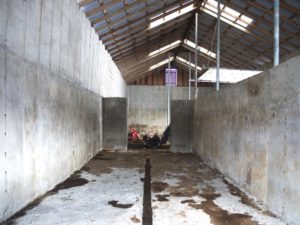 However, when farms started to augment their income by modifying these structures into tourist accommodation, the rustic charm was often lost in the process.

This observation was one of the principle generators for the Drangar project, designed by the Reykjavik-based architects at Studio Granda. So far two of the buildings have been renovated to bring new economic and social life to these vacant, aesthetically-challenged structures.

The tractor shed was uninsulated, with an earth floor and a tin roof. Its size was perfect for repurposing as four guest rooms, two of which were equipped with micro-kitchenettes and a communal sitting/dining area. A door in the central corridor allows for the building to be split into two units or used as one. 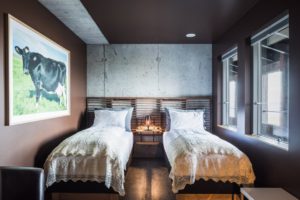 The materiality of the interior is anchored by the original rough-cast concrete and a new terrazzo floor. The interior walls of the communal spaces are white and the ceilings and fitments in fine oak carpentry.

The guest rooms pay homage to the previous use with gloss painted walls and ceilings in various farm machinery liveries. The shed is insulated externally and clad in corrugated copper that changes from brown through aubergine to Spanish green depending on the whims of the weather and sea spray. The fenestration mimics the original shed, but the tractor door has been replaced by a large sliding picture window connecting the communal area to a broad terrace. 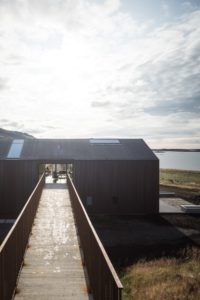 The cowshed and barn were more challenging as the concrete was brutally weathered in such a charming fashion that it demanded to be kept. Furthermore, the cowshed was crudely insulated with expanded polystyrene that had preserved the odour of the previous occupants.

More traces of its former use were in the undercroft that was full to the ceiling with fermenting manure. The adjacent barn was more manageable but programmatically awkward as it was split in two by a tall concrete wall and although the ceiling height was considerable it wasn’t enough to accommodate two stories.

Three principle functions were planned. In the undercroft communal kitchen and lavatories for campers. In the cowshed eight, bovine-colored, guestrooms are wrapped in sleek copper with a communal room, kitchen and reception in the north end of the barn. The roof of the barn was raised to house the owner’s apartment with a grand south terrace and a new bridge to the Drangar promontory.

The material language continues that of the tractor shed but with a shift to expose the existing concrete externally. Again, oak carpentry warms the interiors but here it is counterpointed with stainless steel and monochromatic veined marble.

The project uses minimal energy due to with efficient insulation and fenestration and a heat-pump system that garners heat from the surrounding fields.

Pure water is obtained on-site from a bore-hole. The location may be remote, 30km from the nearest surfaced road, but Drangar is linked, via fiber-optic cable, to the global internet.

All photos are by Pancho Gallardo / Studio Granda.