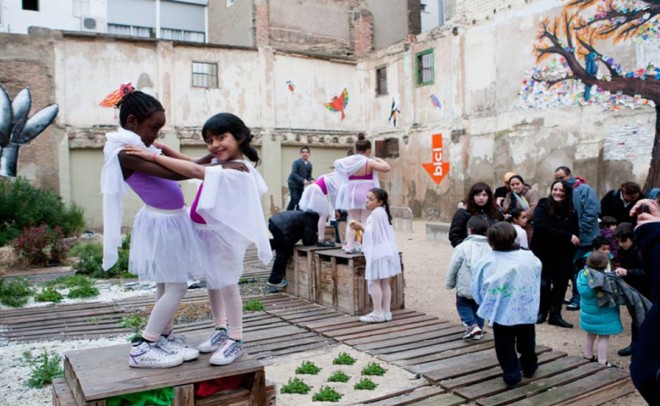 Located halfway between Barcelona and Madrid, the once-prosperous city of Zaragoza was hit hard by the global economic downturn. Unemployment was at an all-time high, property values had plummeted, and a deep social unrest that had been bubbling just below the surface for some time finally erupted.

In the midst of this chaos, despite a scarcity of public resources and morale, a group of architects, citizens, community organizations, and city agencies saw an opportunity — a chance to come together to imagine new possibilities for the city and its residents.

And the solution began with its public spaces, confronting important questions about urban public space—and in particular about the cycles of vacancy and disinvestment that are both a cause and symptom of socio-economic decline in cities.

In her perception of the contemporary city as an intricate network of people, places, and histories, Patrizia di Monti also worries that the emptying of a city’s spaces “has led to a loss of [public] memory, and to the erasure of important links” between a place and its unique identity.

“Each vacuum—each ‘dead space’—produces a disconnection that interrupts the continuous murmur of urban life,” she explains. Nonetheless, from within this emptiness there also emerges a space to imagine “alternative possibilities”—different ways of thinking about how cities are created, planned, and experienced.

Estonoesunsolar is a showcase of these “alternative possibilities,”and however temporary or inexpensive each individual intervention, taken together this network of transformed public spaces has become a powerful vehicle for citizen involvement, social cohesion, and a rekindling of public life in the historical city of Zaragoza.